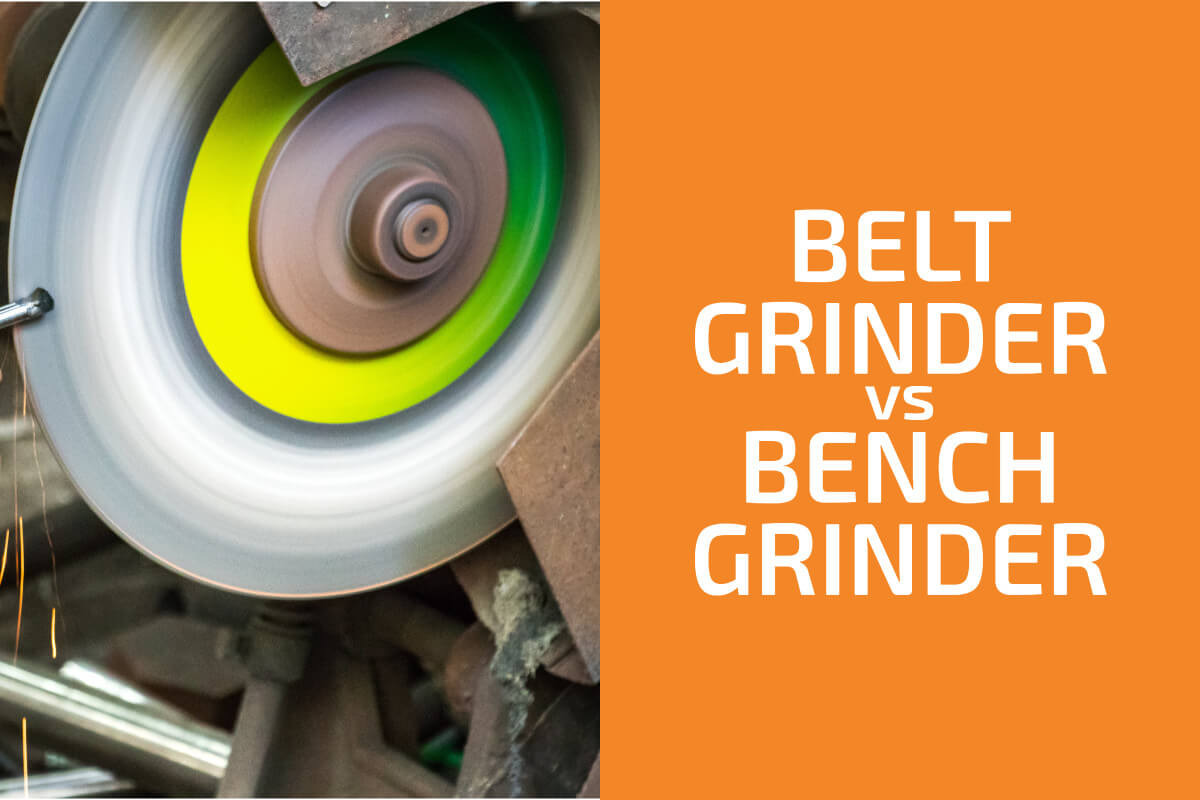 When it comes to working with various metals and wood too, there are some things that can get a bit confusing, such as what the different types of grinders are and what they are used for. Two very common ones are bench grinders and belt grinders.

Yes, they’re both grinders, but they actually have some pretty major differences between them. These differences determine their overall functionality, as well as which one you need for specific jobs. Let’s figure out what bench grinders and belt grinders are, and which of two you need.

Before we can start talking about both the similarities and the differences between belt grinders and bench grinders, we do first need to figure out what exactly these two tools are, and what they are used for.

What Is a Belt Grinder? 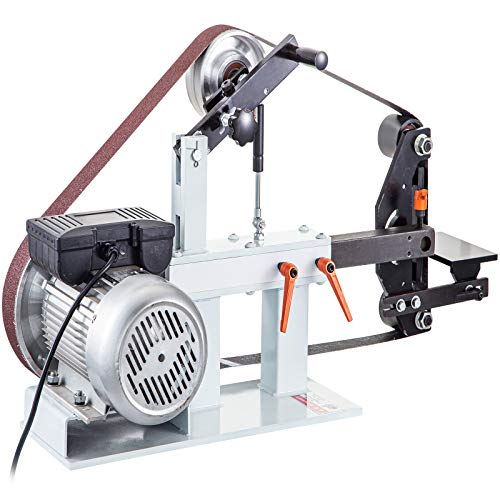 A belt grinder is a specific type of grinding tool that is often used in metallurgy and woodworking alike. That said,m in general, a grinder is more commonly used for metal than for wood. A belt grinder is characterized by a set of wheels that are attached to a motor (and possibly gears), thus causing these wheels to spin. There is then a special belt that is placed and stretched over these wheels.

Therefore, when the motor turns on and spins the wheels, the attached belt then spins in a continuous loop at very high speeds. That belt is of course covered in super hard, strong, and abrasive materials, which allows that belt to grind away at whatever you press against it. Zirconia is one of the most commonly used abrasive materials for this purpose.

One of the most common uses of a belt grinder is for knife making, as these tools are ideal for removing material from a metal surface, honing and sharpening a surface too, and with the right kind of belt, for polishing as well. Remember that this is like sandpaper, or in other words, the belts can have various grit ratings, with some being coarser or smoother than others.

What Is a Bench Grinder? 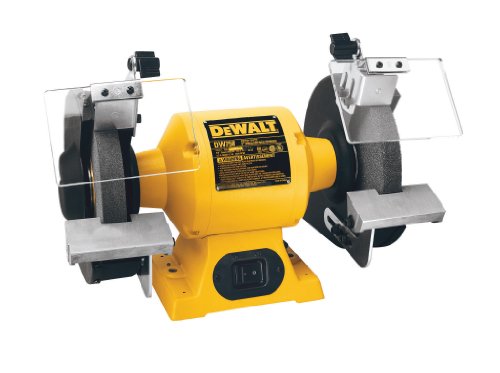 A bench grinder is designed to execute many of the same purposes as a belt grinder, although it tends to be a bit more heavy-duty. It generally has two wheels for grinding, with one usually being a bit coarser than the other, which means that they can often perform a wide variety of tasks using this tool.

Whereas a belt grinder uses a coarse belt to grind away at metals or other materials, a bench grinder has grinding wheels or discs that in themselves do the work (with no belt stretched over them). These grinding wheels are made by cementing together a variety of coarse particle aggregate materials.

Although not 100% accurate, you can think of a bench grinding wheel kind of like a coarse piece of rock or cement. These bench grinders are commonly used to hand grind a variety of cutting tools, for grinding off pieces of large nuts and bolts, and for other tough grinding tasks.

Many people also use grinding wheels for knife making and to sharpen a variety of cutting tools, such as drill bits, chisels, and more. Bench grinders can usually also accommodate wire brush discs and buffing wheels too, designed for cleaning and/or polishing.

Now that we know what both belt grinders and bench grinders are, let’s figure out what makes them similar.

One of the most basic similarities between these two tools is that they do both require electricity to function. These tools are generally too large and powerful to be operated using batteries. They do need to be plugged into a power source.

2. Both Are Designed Primarily for Metal

Another basic similarity that bench grinders and belt grinders share is that they are primarily designed for working with metal. Now, exactly which tasks each of these machines are ideal for does differ, but that said, both are designed for grinding metal.

3. Both Can Perform Roughly the Same Tasks

Generally speaking, both of these types of grindings are designed for the removal of material, grinding away at metal, honing, sharpening, and polishing. For instance, both tools could be used for making and sharpening the blades of knives.

4. Both Are Generally Very Stationary

The other thing worth noting here is that both bench grinders and belt grinders tend to be very stationary in nature. For one, they are extremely heavy, with a belt grinder actually being the larger of the two. With that being said, both of these machines are very powerful and heavy, which means that they do need to be secured to a surface. These are certainly not portable tools. 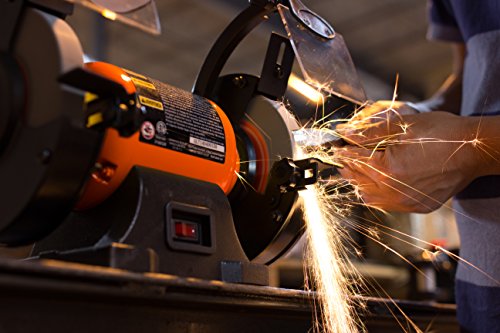 Now that we know what makes belt grinders and bench grinders similar, let’s figure out what makes them different from each other.

Perhaps the most fundamental difference between belt grinders and bench grinders is of course the type of grinding utensil that they use to complete any task at hand. As we have discovered, a belt grinder uses a belt covered in abrasive materials, whereas a bench grinder uses very hard and solid abrasive wheels or discs. The bottom line here is that this difference (more or less) leads to all of the other differences that we’re about to talk about.

The fact of the matter here is that these tools do not move at the same speed, although they do have that ability. Generally speaking, a belt grinder will move in excess of 3,500 RPM, and this speed is required in order for it to be functional. However, a bench grinder usually moves no faster than 3,450 RPM, or in many cases, such as for sharpening, at half that speed.

Now, keep in mind that exactly how fast your bench grinders and belt grinders move does depend on the models in question. Moreover, most of these tools will have variable speeds to choose from. This is not to say that the bench grinders cannot move at much higher speeds, but for the most part, in order for them to be functional and safe, you don’t want them moving any faster. 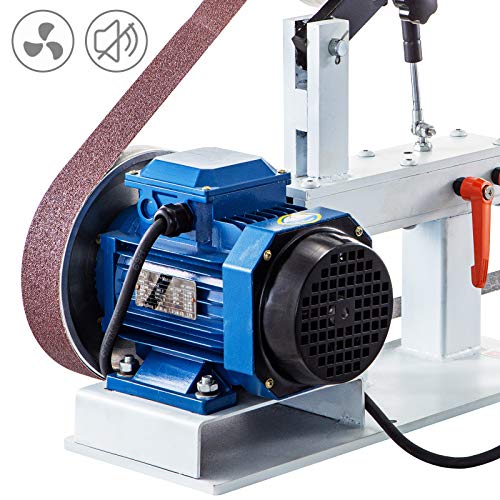 Your average belt grinder usually always just comes with a single belt, which means that you do have to change the belt if you want to change the level of grinding that you are doing. However, with a bench grinder, they usually always come with two separate wheels, thus making life a little bit easier.

5. Bench Grinders Can Generally do More

Generally speaking, belt grinders are best used for the deburring, sharpening, honing, and polishing of metal, as well as to grind down pieces until they are the right size. Technically speaking, both of these tools can perform all of the aforementioned tasks, but a bench grinder is a bit more functional and faster too.

One of the reasons why bench grinders are a little more functional is because they generally come with a cooler system, or in other words, they release a cool liquid onto the grinding wheel, thus reducing friction and heat that is created through the grinding process.

Belt Grinder vs. Bench Grinder: Which of the Two Should You Use?

If you are just removing a bit of material from a piece of metal, or you need to sharpen and hone a knife, then a belt grinder will do just fine. However, for all of those tasks, as well as for sharpening cutting utensils, for grinding down nuts and bolts, and for more intensive metal grinding purposes, it is a bench grinder that you want to use.

In essence, you can think of a bench grinder as the much heavier duty option when compared to the belt grinder.

Now that you know everything there is to know about bench grinders and belt grinders, especially in terms of the differences between them, you can make an informed decision as to which one to use for your next big project.