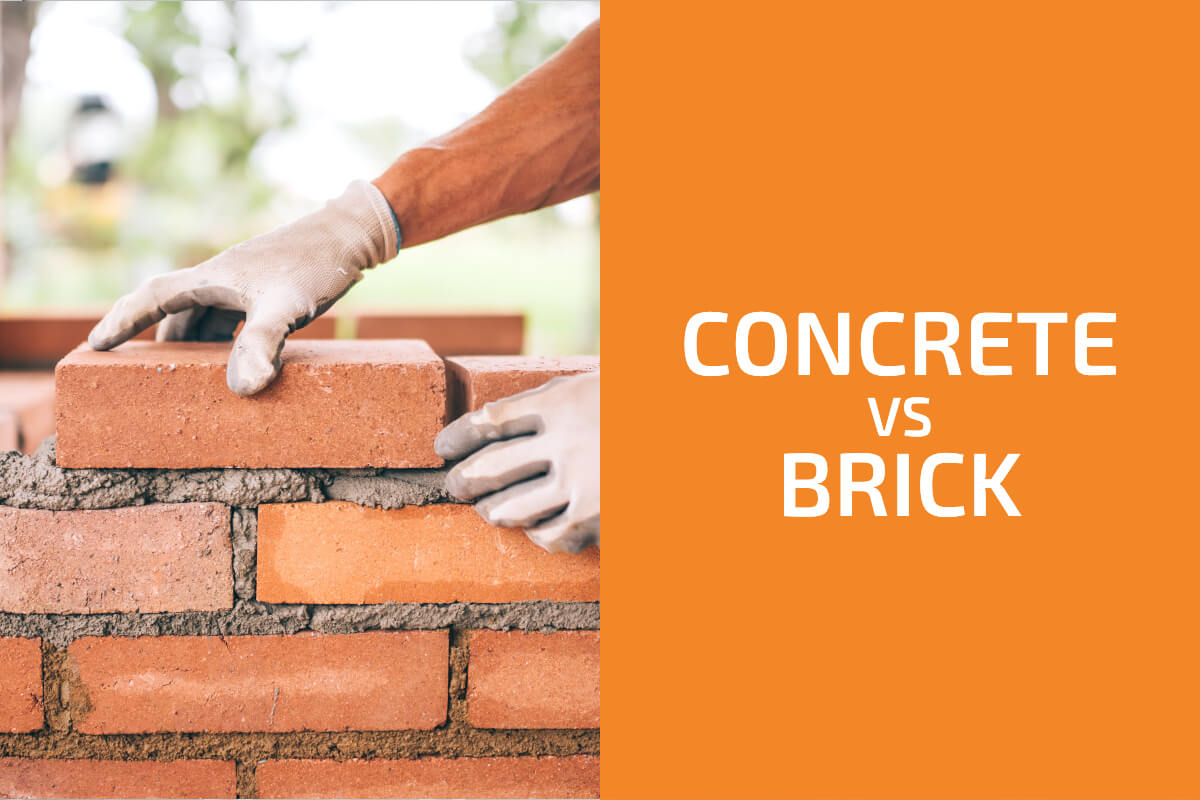 When it comes to building something like a wall, two of the most common building materials to use are concrete and brick. Keep in mind that here we are talking about poured concrete, not concrete blocks.

Today, we want to help you figure out what these two materials are, what makes them similar and different, and which one is best for specific applications.

Concrete and Bricks: The Basics

Before we talk about similarities and differences, let’s first determine what both concrete and bricks are.

First, we have concrete, which is a very common building material used for making foundations, walls, driveways, and more.

Concrete is a composite material that is made by mixing together Portland cement, water, and aggregate. The aggregate may be sand, gravel, and/or crushed stone.

When water is mixed with the dry concrete powder (cement and aggregate), it creates a chemical reaction which then causes everything to harden.

Concrete may be factory mixed and then shipped to a site, or mixed on-site. It can also come in many different colors.

A brick is a specific type of block most often to build walls, walkways, and other things in masonry construction.

Although there are now bricks made of various substances, generally speaking, bricks are made out of dried clay. Clay is put into a form and then allowed to dry in the shape of a brick. Although bricks can sometimes be interlocked, the most common way of joining them is by using mortar, with the mortar being made of cement, sand, and lime.

Similarities of Concrete and Bricks

Now that we know what both of these materials are, let’s figure out what makes them similar.

1. They’re Both Hard and Dense

A basic similarity here is that both of these building materials are extremely hard and dense. Both are materials that may be used in masonry constructions.

Both of these materials are commonly used to build a variety of structures. For instance, both can be used in the construction of walls and driveways.

Another similarity is that both concrete and brick are very fire-resistant, if not fireproof. While they technically aren’t 100% fireproof if there is already a huge fire going on, getting them to combust in the first place is nearly impossible.

The other big advantage that you get with both brick and concrete is that insects cannot permeate them, and they also don’t rot or decay. This makes them very desirable when compared to wood.

Differences Between Concrete and Bricks

Now that we know what makes concrete and brick similar, let’s figure out what makes them different.

Perhaps the biggest difference is that bricks are made out of dried clay, whereas concrete is made out of cement, aggregate, and water. Generally speaking, these are fundamentally different building materials.

The simple reality is that concrete, particularly poured concrete, is much stronger than brick. Dried clay isn’t all that strong, and bricks usually have hollow sections in them. Concrete is generally just much stronger.

3. The Ability to Be Reinforced

Something else that makes concrete better than brick is that you can reinforce it with rebar. These are metal rods that are inserted before the concrete is poured, thus providing added strength and shock resistance. This is not something that you can do with bricks, which is why you can’t build a tall building just out of brick.

Concrete, especially the right kind, is far more water and weather-resistant than brick. Brick is not great for this because separate units are joined with mortar. Each of those joints is susceptible to leaking water. Bricks themselves also degrade rather quickly compared to concrete.

Building with bricks is done by layering bricks on top and beside each other, and joining them with mortar. Concrete is used by pouring it into molds or frames, and then letting it harden.

Concrete is often used for driveways, foundations, skyscrapers, walls, and anything in between. Bricks generally have fewer applications due to their limited strength, water resistance, and shock resistance.

Because it can be reinforced with rebar, concrete is much more shock resistant than brick. A tall building made of brick probably wouldn’t survive an earthquake.

Concrete tends to be easier to build with because you just pour it into a frame and let it dry. However, it takes great skill to build anything good-looking and durable out of brick.

Generally speaking, brick will be more expensive to build with than concrete.

You can color concrete more or less any color you see fit, which is not the case for bricks.

Concrete vs. Bricks: Which of the Two Should You Use?

If you are just building a small wall, or like the look of a brick driveway, then you can certainly go for brick. That said, realistically, concrete is the better option. Yes, you do need to make frames and pour it, but even that’s not very hard.

Concrete is stronger and reinforceable, more weather resistant, generally easier to work with, better for large-scale projects, and more affordable too. If you need something that will last, concrete is the way to go. On a side note, for foundations, you always want to use concrete, not brick.

Now that you know what the main differences between bricks and concrete are, you can make an informed decision between the two for your next big construction project.