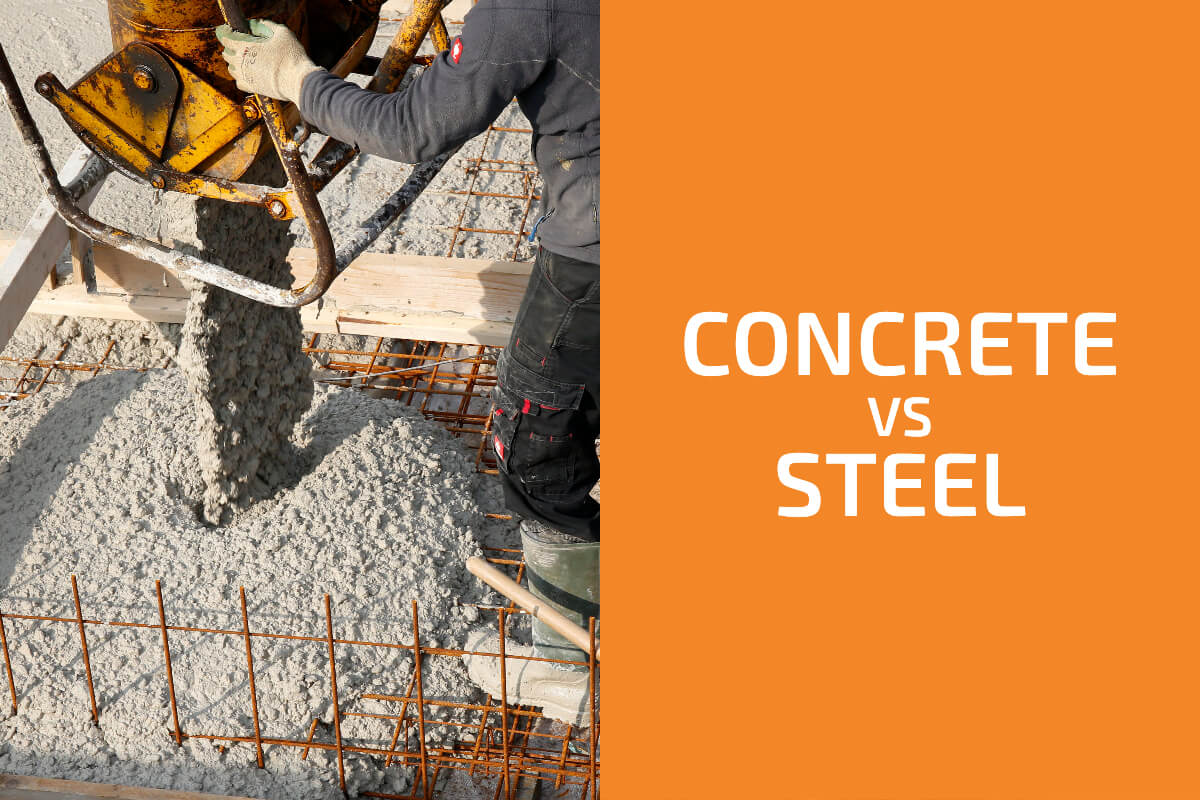 In this article I’m going to explore concrete and steel, two of the most common materials used in construction. Both concrete and steel have their particular strengths. In many projects they are used together to compliment each other’s strengths. So let’s take a closer look at both to gain a deeper understanding of the two materials.

Concrete and Steel: The Basics

Before we start getting into the differences, we should really get the basics covered first.

Concrete is a building material that consists of a mixture of broken stone or gravel, sand, cement, and water. In construction it is poured as a slab or into forms and molds. Concrete’s history is a long one, going back 12,000 years. It’s debated as for when it was first used but the Romans were the first to use it as we do today.

Steel is a hard and durable metal made by greatly heating iron and mixing it with carbon. Steel also has a history dating back many years. As early as 1800 BC the metal was used to forge weapons and tools. In the modern world, steel is still used in such applications, but also provides us with a versatile and extremely strong building material.

Similarities of Concrete and Steel

While fundamentally different, the two materials do share some similarities.

Depending on the mixture, concrete can be made to varying degrees of strength. It typically can carry very high loads, so is commonly chosen for building foundations.

Structural steel possesses high strength-to-weight and strength-to-size properties. It can be installed in any environment and able to resist corrosion in harsh conditions where other materials would not.

The availability and abundance of the things that make up concrete help make it a relatively cheap building material. Gravel, sand, cement, and water are readily available in most parts of the world. Concrete can be manufactured to the required strength with an economy. Concrete can also be made incorporating some waste products, lowering overall manufacturing costs.

When constructing a steel structure, the forces acting on the foundation of the building can be up to 50% less than a similar structure made of concrete. This translates to a foundation that costs less to make. Another cost consideration to make is that when installed and maintained correctly, steel can last for many years making the initial investment worth it in the long term.

Differences Between Concrete and Steel

The two main differences between concrete and steel are the required construction time and strength properties.

Steel structures are preferred when the speed of construction is considered. With shorter construction times the building can be occupied sooner and labor costs are reduced.

In comparison, concrete structures take longer to build. However, with advances in building technology such as self-climbing forms and pre-made concrete elements, the construction time gap between concrete and steel is closing.

Concrete is extremely strong in compression. This makes it a perfect choice when building foundations. This property also lends itself to construction of massive structures such as dams and buildings resistant to explosions.

Steel on the other hand has tremendous tensile strength. This gives a steel structure an advantage over concrete. Tensile strength is defined as the ability of a material to resist being pulled apart. When subjected to high tensile loads such as those experienced in an earthquake, traditional concrete structures are much more likely to fail than a steel-framed building.

Concrete vs. Steel: Which Is Better for Construction?

To answer the question of whether concrete or steel is better, what job you expect it to do is a major consideration. In some applications, steel will outperform concrete and vice versa.

For example, if you want to construct a building such as a warehouse and have it operating quickly, then the advantages of steel make it a favorable choice. The foundation you will have to build to carry the structure can be made cheaper and faster due to the comparatively low weight of the steel frame. Additionally, the building can be erected very quickly, so it’s ready sooner than if you were to build with concrete.

When building big, concrete comes into its own. Undertaking the construction of massive civic projects such as dams, concrete is really the only option thanks to its unique strength properties and readily available raw materials to produce it.

Some of the largest structures on earth are completed in concrete. The Panama Canal would be impossible to construct in anything other than concrete.

Concrete and steel are often used together in what’s known as reinforced concrete. A net-like structure of steel is suspended in concrete as it is poured. When finally dry, reinforced concrete has both high strength in tension and compression. This makes it particularly useful when used in the construction of roads, bridges, roof slabs, and walls.

Reinforced concrete has a longer working life due to the composite nature of its makeup. The steel prevents cracking and thus minimizes the corrosive effects of water-making inside the concrete.

Something I’ve not touched on yet is aesthetics. There are many steel structures that are architecturally stunning such as Brooklyn Bridge in New York or Burj Khalifa in Dubai. But concrete, with its ability to be formed to take almost any shape can be used to create the world’s most beautiful and unique structures. The Pantheon in Rome and the Sydney Opera House are just two examples of extraordinary concrete architecture.

Today steel and concrete are used to build the vast majority of our buildings and construction projects. The technology and methods of building with both materials are constantly improving, giving us more flexibility and freedom in design as well as reducing costs overall.

Over many centuries and countless building projects, we have learned that some jobs are done better with concrete and some are done better with steel. History is our teacher and saves us from making costly mistakes, both financially and in that of human life. Concrete and steel, although safe and reliable when installed correctly, can fail spectacularly when rules aren’t followed.

Whatever building project you have to tackle, either used alone or combined, concrete and steel can get the job done functionally and beautifully.