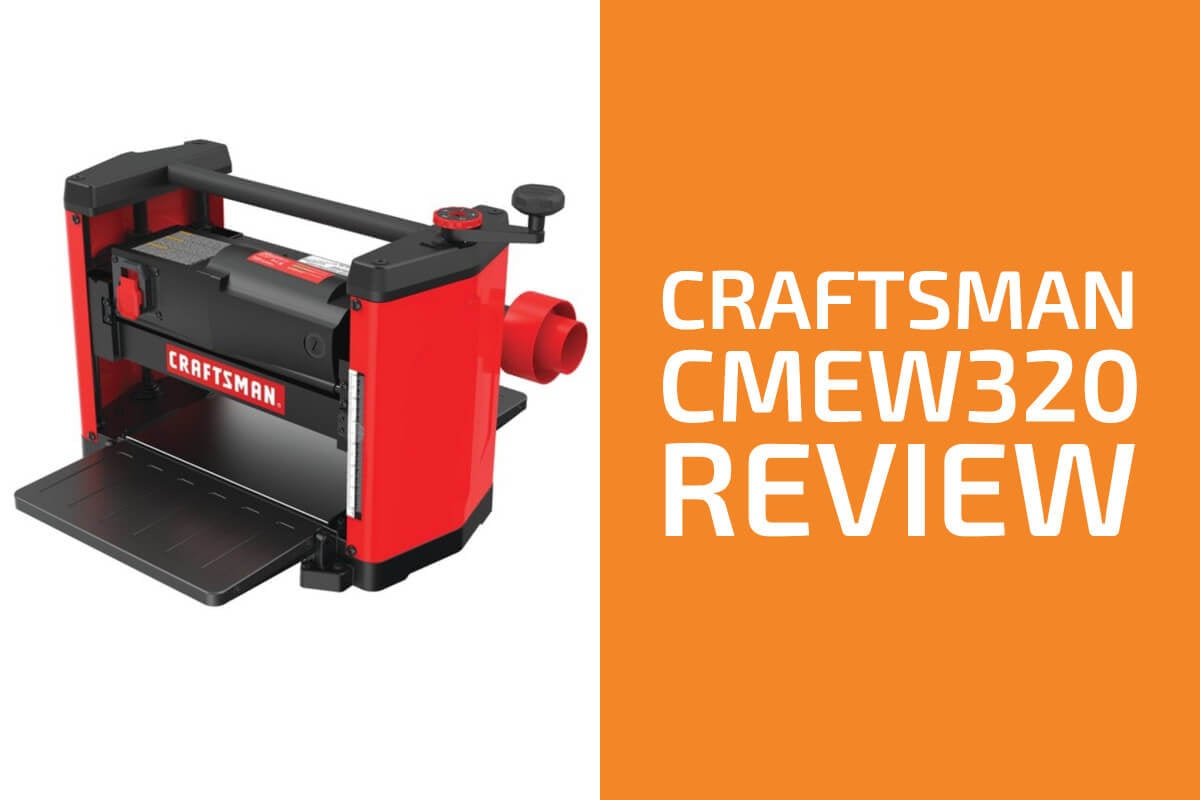 If you are eyeing a simple benchtop planer for your next woodworking project, you’ll need a unit that has sufficient cutting speed and power. A great example of that is the Craftsman CMEW320 15-Amp Benchtop Planer, which is capable of handling both hardwood and softwood and will remove materials with aggression.

To know whether the Craftsman CMEW320 Planer is suitable for your needs, here’s a review I wrote, which details its pros and cons, as well as what to expect from it.

A budget-friendly benchtop planer for the beginner or casual woodworker. Features reversible knives that save effort, time, and money.
Check today’s price on Amazon

As a benchtop planer, the Craftsman CMEW320 is meant for both the casual and the moderate-level woodworker due to its sufficient cutting speed, great stock removal, and reversible knives. Whether you’re new to woodworking projects or have been working on them for quite a while, this benchtop planer will appeal to you.

This 15-amp benchtop planer is made for hardwood and softwood stocks, with its two-knife system, in which it has a solid steel cutter head mounted on ball bearings. As for the cutter head speed, it goes up to 8,000 RPM, which is enough for a majority of woodworking tasks involving dimensioning lumber. As for its motor speed, it has 16,000 CPM (cuts per minute).

The benchtop planer is backed by a 3-year limited warranty in which Craftsman will replace any unit with defects due to faulty manufacturing or materials.

At any rate, to ensure quality for their material, the benchtop planer is made from the finest materials. For instance, it has high carbon steel knives that are double-edged and reversible. This reversible feature allows these knives to last longer.

Even if the cutter head is only a dual knife system (as opposed to the more expensive three-knife system), you’ll have to pay for fewer blade changes (and re-sharpening) due to the reversible design.

Aside from that, the ball bearings with a solid steel cutter ensures smooth operation, and also adds to the motor’s longevity. Likewise, to keep its motor and internal parts away from work debris such as sawdust, it has a vacuum port for dust collection.

As for usability, it has a quick-change system for the dual knife setup, sparing you time from performing maintenance, and allowing better productivity on your next woodworking project. In addition to that, the vacuum port comes in handy to keep things nice and tidy.

Likewise, to speed up work with tough and brittle materials such as oak and ash, the Poly-V Cutter head drive helps improve the maximum stock removal for your current workpiece.

Should You Buy the Craftsman CMEW320 Planer?

The Craftsman CMEW320 is a great choice for people who want a basic benchtop planer with sufficient speed, power, and ability to handle hardwoods just as well as softwoods. It also has a reversible set of knives (despite being just a two-knife system), which will save you big bucks in the long run when you consider blade replacements and sharpening needs.

If you are still unsure about your decision, go through the below list of the pros and cons of the tool.

Pros of the Craftsman CMEW320

Let’s start with the positives.

It has reversible knives.

A set of reversible knives will save you money in the long run, since you don’t need to sharpen them as often as regular knives. When searching for a quality benchtop planer, choosing a model with reversible blades is a plus point because not only does it reduce the hassle of sharpening and finding replacement blades, but it also saves time and amps up productivity.

It comes with dust collection capability.

What I like about this benchtop planer is that it comes with an adaptable dust collection port. This way, connecting to your preferred shop vacuum will be a breeze. After all, dust collection systems are a woodworker’s best friend, especially for those with terrible sawdust allergies.

It has a four-column design to decrease snipe.

We all know that snipe is annoying and is difficult to eliminate from any board. However, when it comes to benchtop planers, stability is key to reducing snipe. In this case, the Craftsman CMEW320 does have a four-column design that decreases (if not eliminates) snipe, saving your value material.

The blade system is easy to change.

Convenience is a luxury that doesn’t necessarily require a hefty price tag. For example, the Craftsman CMEW320 has a blade change system that’s simple to use, allowing you to move onto your next material while avoiding hassle.

After all, blades will get dull eventually, depending on usage. That’s why an easy replacement benefits the operator, no matter the skill level or experience.

Cons of the Craftsman CMEW320

Even though the Craftsman CMEW320 is a great tool, there are a few cons worth noting as well.

The gauge could be better.

If you’re not so used to benchtop planers, the adjustment gauge may frustrate you at first, and requires a bit of a learning curve.

It only has two knives instead of three.

While not necessarily a con, some people would prefer a three-knife system instead of a dull knife because they tend to last longer in terms of blade replacement. When you consider the bigger picture, having three knives to do the work seems to be better than two (although they are usually more expensive) if you’re mostly handling hardwoods.

What Are the Alternatives to the Craftsman CMEW320? 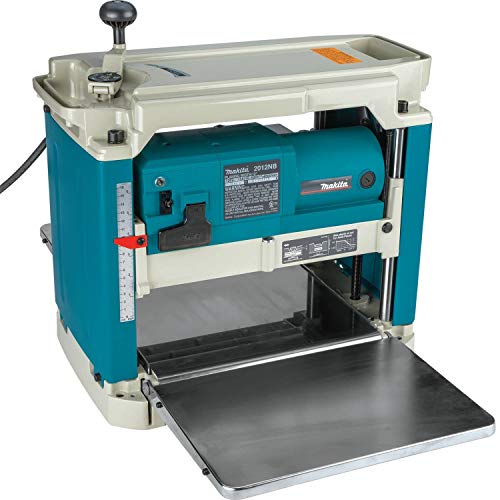 The Craftsman CMEW320 is a great benchtop planer for every skill set, but if you don’t find it the right unit for your needs, here are some other alternatives to choose from:

The Makita 2012NB 12-Inch Planer (read my review) is a similar planer with a cutter head speed of 8,500 RPM. It has a locking clamp mechanism that reduces snipe, much like the four-column system of this Craftsman planer that I mentioned above. Another similarity is its four-post design, which is similar to that very column system I discussed.

As well, both models have shop vacuum compatibility, which is important for any woodworker. They are also both 15-amp motor units that will handle both hardwood and softwood materials just fine. However, some notable differences include convenience features such as an LED power light and a large paddle switch.

If you want extra width for your material, the DeWalt DW735X 13-Inch Thickness Planer is a two-speed machine that lets you choose between 96 and 179 CPI. This allows you to fine-tune your work depending on the material that you have. It has up to 6 inches of depth capacity and has a 19/34-inch cast aluminum base for stability.

Among the similarities with my Craftsman pick above include the dust hose adapter for your shop vacuum. However, there are a couple of differences, such as a depth stop, an automatic carriage lock, and extra blades. It also runs quite loud compared to the Craftsman machine mentioned above.

Yet another simple unit to consider is the Porter-Cable PC305TP 12-Inch Benchtop Planer, which has a similar 15-amp motor and a Poly-V belt cutter head drive for better material removal in terms of speed and power.

One similarity with the Craftsman CMEW320 is the four-column system, which is the mechanism used to decrease snipe and ensure stability when operating the unit. It also has dust collection compatibility with many shop vacuums on the market.

Overall, I believe that the Craftsman CMEW320 is a great benchtop planer for beginners, casual users, and even moderate woodworkers. If you don’t need a three-knife system at the moment (which is more recommended for frequent hardwood jobs, anyway), this is already a sufficient planer for a majority of cutting and planing tasks out there.

A budget-friendly benchtop planer for the beginner or casual woodworker. Features reversible knives that save effort, time, and money.
Check today’s price on Amazon