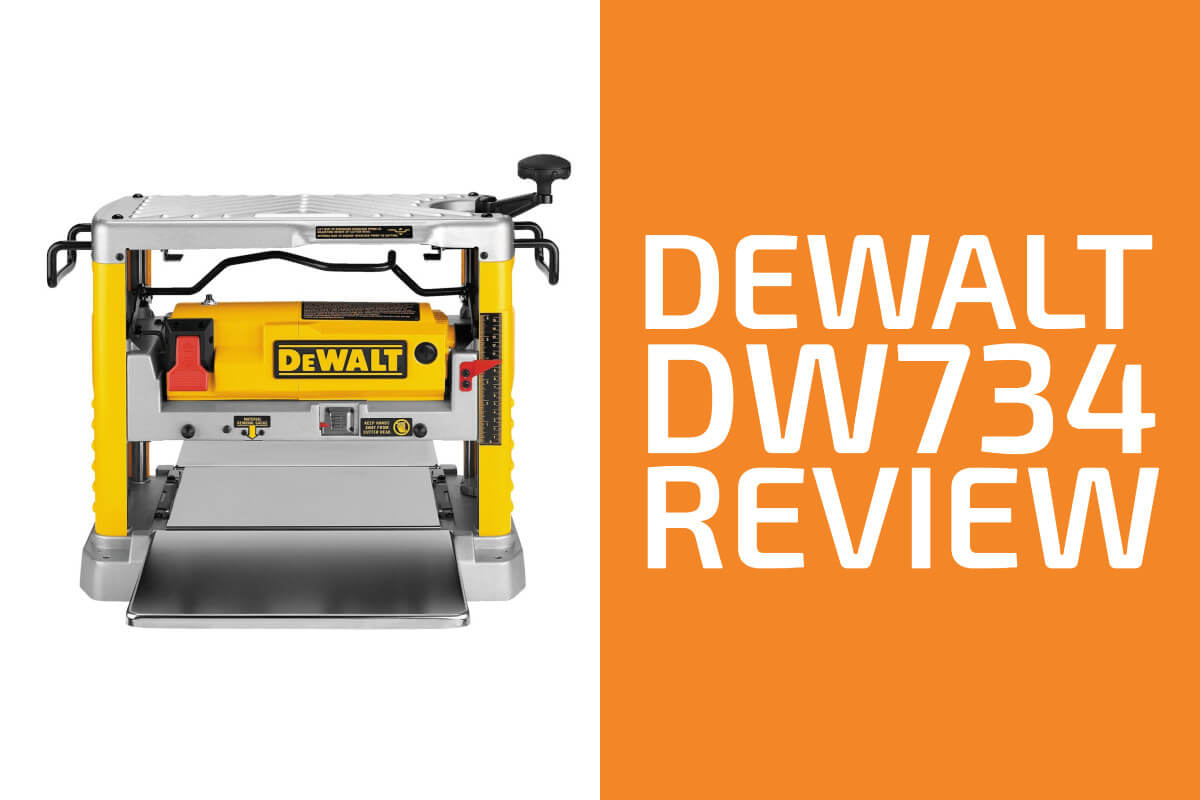 Are you often working with lengthy materials for your woodworking projects? Do those projects require you to use hardwoods? If that’s the case, the DeWalt DW734 Single-Speed Benchtop Planer is a great choice for you. But what’s to say about this benchtop planer and its features?

To help you decide whether to buy this unit or not, I’ve written a review to let you know its pros and cons. This way, you’ll know if this machine is just right for you.

A powerful benchtop planer with a three-knife system. This model can handle tougher and bigger materials.
Check today’s price on Amazon

Made for handling hardwoods such as cherry, ash, oak, pine, beech, maple, walnut, and even the unique purple heart tree wood, the DeWalt DW734 is a great choice for power and accuracy if you’re working with any of these materials.

And since I mentioned speed, let’s talk about its cutter head system. It has a three-knife cutter head that makes it suitable for the hardwoods mentioned above. The cutter head has up to 96 CPI for its speed, so it can handle difficult materials.

Aside from that, it has up to 33-1/2 inches of support for any material thanks to its infeed and outfeed tables that outweigh most benchtop planers out there. The unit weighs 80 pounds – slightly lighter when compared to similar planers out there with the same three-knife system.

The DeWalt DW734 is backed by a 3-year limited warranty, in which any authorized service center will repair your unit from any defects due to workmanship.

However, it’s notable durability features suggest that you might not need to use the warranty anyway. For instance, it has reversible knives that have up to 30% longer lifespan compared to standard types. Also, the fact that it has a three-knife system means that less effort is being exerted by each knife, thereby reducing its wear and tear if you compare it with a cutter head that only uses two knives to plane your material.

Moreover, it has a 4-column carriage lock that keeps the benchtop planer (and the material) stable while also eventually reducing snipe. Aside from that, the material support through the infeed and outfeed tables allow you to place bigger materials without worrying about whether or not the machine will give in quickly.

In terms of usability, the turret depth stop will help you to automatically make cuts with ease and without having to set the correct depth each time you make a pass. This is useful for woodworkers who want to save time and make the right depth settings with the same types of materials over and over again.

If you want repeatable accuracy and results, then the depth stop feature is always a plus point. It not only saves time but also effort that you can use for other tasks in your project.

Another feature that I like is the 4-column carriage lock, which is the machine’s preventive measure against snipe. We all know that snipe is annoying because it consumes a lot of material in the long run. Having a carriage lock will help prevent sacrificing your material because of snipe.

Snipe is often caused by an unstable machine. Therefore, by having a carriage lock with four columns, it will help stabilize both the benchtop planer and the material you are working with. The movement will significantly reduce with this mechanism, resulting in fewer snipes on your material.

One usability feature that goes hand in hand with the turret depth stop is the material removal gauge. It comes with a large thickness scale that is easy to read even when you are in the dark (or a dim work area). This ensures that each pass you make has uniform thickness so you don’t waste materials.

By using the material removal gauge and setting it to your desired thickness, you don’t have to worry anymore whether the pass you’ve made is too thick or too thin for your standards. You will make repeatable results with little effort thanks to this thickness scale.

Last, but not least, I like the additional length of the infeed and outfeed tables. Imagine having to work with very lengthy stocks – you’ll need tons of space to process them! Thankfully this benchtop planer comes with table extensions that allow up to 33-1/2 inches of material support!

Should You Buy the DeWalt DW734 Planer?

You’ll like the DeWalt DW734 if you are mostly working with hardwoods such as oak, ash, and the like. We all know how brittle and difficult it is to process hardwoods, regardless of the project you’re working on. That’s why having a heavy-duty set of knives in a three-blade system is helpful, and keeps the knives lasting longer.

What’s more, since it has a depth stop and a material thickness gauge, you’ll have repeatable results with little effort spent on cutting and planning. This is important for woodworking projects that involve a lot of similar thicknesses per piece, such as cabinets and shelves.

If you are still unsure about your decision, go through the below list of this tool’s pros and cons.

Pros of the DeWalt DW734

Let’s start with the positives.

The benchtop planer has a three-knife system.

What I like about the three-knife system of the DeWalt DW734 is that it doesn’t need to be replaced frequently. A triple knife cutter head means that it can endure more wear and tear due to having three blades at the same time as compared to a unit with only two blades.

Because of this, you don’t have to worry about replacing the blades often. What’s more, it even has reversible blades, which just adds to its convenience and overall lifespan.

Another plus point of the three-knife system is the ability to cut and plane hardwoods such as beech, ash, oak, maple, and the like in a much better way when compared to two-knife cutter heads. A triple-knife cutter head is built for that reason, which makes it superior to those with dual blades.

When you cut with a dual-blade machine, you can’t neatly process hardwoods versus a three-knife system, which has more blades, and more precision overall.

Likewise, since the DeWalt DW734 has a triple knife system, it also has a higher cutter head speed, which allows you to finish the job quickly. At 10,000 RPM (cutter head) and 20,000 RPM (motor), this machine will be a dependable workhorse in your work area.

It has a 4-column carriage lock to avoid snipe.

Stability is highly important when you’re using a woodworking machine such as the benchtop planer. With the DeWalt DW734, you will get less likelihood of snipe thanks to its 4-column carriage lock. This locking mechanism stabilizes the entire machine and the material so you’ll have little room for error once you make your pass.

No one likes to have snipe in their material so having a locking system for your machine is an important plus point. Not only that, but the DeWalt DW734’s 4-column carriage lock will also add to its durability, since it stabilizes the unit when it operates.

The machine has a turret depth stop.

As I mentioned above, the DeWalt DW734 has a turret depth stop, which allows you to work with your preferred depths over and over again. This is important if you want to get repeatable results without having to spend too much effort working on your materials.

Along with the depth stop feature is the material removal gauge. Both of these two features allow you to maintain accuracy with your workpiece without having to spend too much time worrying whether you’ve made the right thickness or not.

It has long infeed and outfeed tables.

If you often work with extra-long materials, you will love the DeWalt DW734’s infeed and outfeed tables. This tool is able to support up to 33-1/2 inches of material, which is convenient when handling large pieces of oak or any other hardwood. Such a feature saves time and effort as well.

Cons of the DeWalt DW734

Even though the DeWalt DW734 is a great tool, there are a few cons worth noting as well.

It doesn’t have a dual-speed feature.

While other three-knife systems do have dual speed features, unfortunately, you’re only stuck with 96 CPI. Nonetheless, if you’re just looking for a three-knife cutter head and don’t mind missing out on the dual-speed feature, this won’t be a con for you.

Removing the dust collector is a little tedious.

If you’re the type of woodworker who prefers a clip-in dust collection system then this benchtop planer isn’t for you. That’s because it has a screw-in design, which might be a little tedious if you prefer something quicker to empty.

Nonetheless, a screw-in mechanism is also seen as a pro rather than a con if you prefer a much safer and more stable attachment to your shop vacuum.

What Are the Alternatives to the DeWalt DW734? 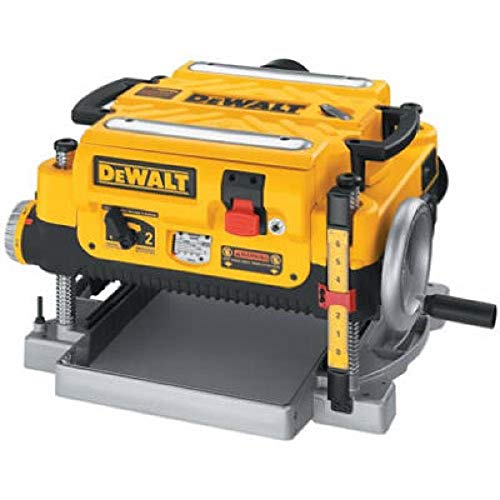 If you believe that the DeWalt DW734 isn’t the right benchtop planer for you, don’t worry – I’ve got a couple of alternative units below:

The DeWalt DW735 Two-Speed 13-Inch Thickness Planer is a good choice if you prefer a wider capacity and a two-speed option. It still has 10,000 RPM for its cutter head speed and it has a three-knife cutter head system as well, making it convenient for hardwoods.

Another machine that is worth mentioning that has a reversible knife system is the Craftsman CMEW320 15-Amp Benchtop Planer (read my review). The only difference is that it has just 8,000 RPM for its cutter head speed. Nonetheless, it does have ball bearings with head mounting for reducing snipe.

If you prefer a dual-speed unit that also has an automatic carriage lock to decrease snipe, the DeWalt DW735X 13-Inch Thickness Planer is for you. It has a similar 10,000-RPM cutter head speed with three knives, allowing it to work efficiently for hardwood processing.

As a whole, the DeWalt DW734 is a great choice for hardwood projects because of its three-knife system. Although it lacks the dual-speed feature, it’s sufficient for those mostly just concerned with handling tough materials. It is good at delivering repeatable and accurate results, while also processing large-scale stock thanks to its large infeed and outfeed tables.

A powerful benchtop planer with a three-knife system. This model can handle tougher and bigger materials.
Check today’s price on Amazon