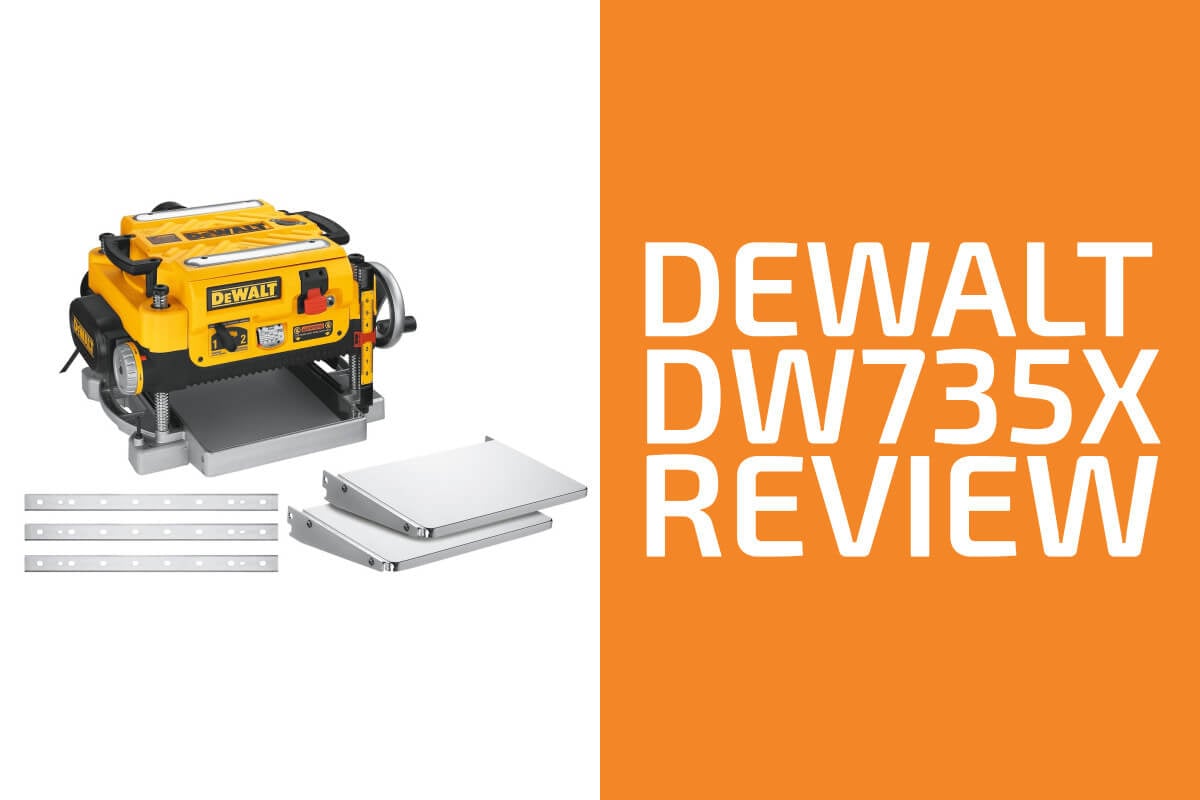 Made for the woodworker who’s looking for a three-knife system, the DeWalt DW735X 13-Inch Thickness Planer is a great choice for those that handle brittle materials, such as hardwoods that are sometimes a handful for two-blade units. Whether you work just in your home garage or want to step up your craft, this benchtop planer has plenty of convenient features to offer every woodworker.

If you want to know whether the DeWalt DW735X is the right benchtop planer for you, here’s a review that I wrote that details its features, specs, pros, and cons.

A two-speed benchtop planer that’s great for handling wider materials. The three-knife system speeds up productivity and the depth stop and gauge are great for repetitive cuts.
Check today’s price on Amazon

As a benchtop planer, it is known for its three-knife system as contrary to two-blade types. This makes it more suitable for hardwood and other difficult materials that are too brittle to plane with regular machines.

This 13-inch benchtop planer has a max depth cut of 1/8 inch and a depth capacity of 6 inches, making it ideal for most woodworking tasks of common size. The planer has dimensions of 24 x 22 x 18 inches while weighing 92 pounds, which is common for most benchtop planers.

It also has a 19-3/4-inch cast aluminum base for added durability. As mentioned above, because it has a three-knife system, it has more precision as compared to the dual blade planer machines out there. It has a two-speed gearbox that allows you to switch between 96 and 179 CPI. This allows you to fine-tune the benchtop planer depending on the needs of your material.

A 3-year limited warranty is guaranteed for this benchtop planer, as well as a 90-day money-back guarantee and 1-year of free service from any of their factory service centers in the United States.

However, when it comes to lasting durability, it does have a cast aluminum base that will help to support your material and the machine. This will reduce the chances of snipe and other errors. Aside from that, it has fan-assisted chip ejection vacuums that will keep the motor clean of debris, resulting in less risk of jamming and overheating.

Aside from that, knife replacement is also less of a worry due to its three-knife cutter head system. You will get up to 30% longer lifespan for the knife system of this benchtop planer when compared with two-knife units. This is important for those who are looking to save time and money, as it avoids constantly replacing the knife when they wear out.

I also like that this machine already comes with infeed and outfeed tables plus extra knives, so it is ready to be used right out of the box. 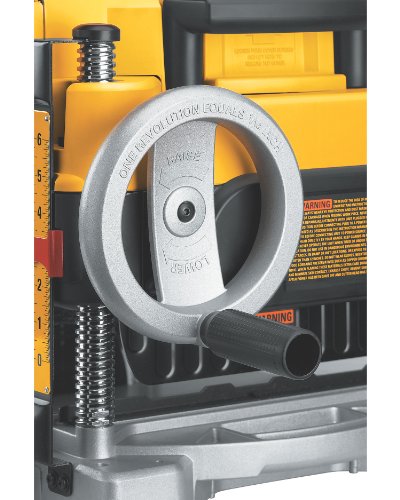 Among the usability features that I like most about this benchtop planer is its dual-speed gearbox. This is helpful when you want a specific CPI for your material to either speed up work or to decrease the ruggedness of the planed material. You have the power to choose between 96 or 179 CPI.

Aside from that, it has a material removal gauge and thickness scale so each pass you make is sure to be the same size. There’s little to no room for error thanks to this material gauge, which helps to make repetitive cuts without using your precious time to measure it again and again, ensuring better productivity.

Likewise, there is an automatic carriage lock that will assist in your material planing, and reduce the likelihood of snipe. We all know that snipe is not purely avoidable, but there are mechanisms like this that will decrease it. Because this lock is automatic, it saves valuable time and effort, especially great when you’re trying to meet a deadline.

I also like the very large and easily accessible turret depth stop. You can set it to your preferred thickness and just keep using it to plane your material. This adds more productivity while reducing wasted time and effort when making successive cuts. If you are looking for a benchtop planer that will perform tasks quickly without sacrificing accuracy, get one that has a depth stop.

Should You Buy the DeWalt DW735X Planer?

The DeWalt DW735X is the benchtop planer for you if most of your work will involve small to medium-scale materials that are best planed under a three-knife system, especially hardwoods and the like. Unlike a standard two-blade system, a benchtop planer with three knives will make the material smoother with each pass while also lengthening the lifespan of the entire blade system.

What’s more, this benchtop planer also has great usability features, such as a depth stop and gauge, for repetitive cuts without worrying about whether you accurately made the correct thickness or not.

If you are still unsure about your decision, go through the below list of the pros and cons of the tool.

Pros of the DeWalt DW735X

It has a depth stop.

As mentioned above, the DeWalt DW735X has a depth stop that allows you to set the appropriate cutting depth for your material. With this feature, making repetitive cuts will be a breeze overall, allowing you to save time and enhance productivity. Whether you’re just a weekend warrior or serious in your craft, a time-saving depth stop is always a plus point.

Because this depth stop is lockable, the materials you process will more or less get the same accuracy, which is helpful in terms of saving time and effort.

The planer has a three-knife cutter head.

Combined with its 10,000 RPM cutter head speed, the DeWalt DW735X has a three-knife system that will be more suitable for brittle materials such as hardwoods, such as oak, ash, beech, maple, and walnut. If you need to work on a project that requires processing any of these trees, you’d best get the DeWalt DW735X due to its faster cutter head speed and triple knife system.

You’ll see the difference between the three-knife and the two-knife system in terms of accuracy and the finished product after each pass. You’ll feel the smoother finish when you run any hardwood material through the DeWalt DW735X when compared to a two-knife system because it simply has more knives and a faster speed to handle it.

Another plus point that I like about a three-knife cutter head is the durability. You don’t need to constantly sharpen or replace the knives because they will last longer due to having three operate at the same time versus a machine that only uses two.

The fewer knives you have in a cutter head, the more likely they are going to wear out easily – that’s the general rule. And since the DeWalt DW735X has three knives, they each have a better lifespan because they combine their cutting powers.

There is a convenient material removal gauge.

With this material removal gauge, the DeWalt DW735X allows you to deliver the right thickness with each pass that you make. Like the depth stop, this allows you to save time and effort in the long run. Rather than make many passes because of measuring errors, the material removal gauge of the DeWalt DW735X will simplify your work thanks to its thickness scale.

What I also like about the thickness scale is that it is easy to read due to its size, which also makes it a breeze to operate even in low-light conditions. A benchtop planer with comfortable usability features like the DeWalt DW735X deserves a spot in your garage or woodworking shop.

It has an automatic carriage lock to avoid snipe.

Every woodworker hates getting snipe on their material. The snipe is the excess end of the material in which the planer cut too much material than the rest of the board, causing an uneven cut. To avoid snipe on your material, regardless of what kind of wood it is, a clamping mechanism is important.

Among the leading causes of snipe is having an unstable work machine. Because the DeWalt DW735X has an automatic carriage lock system, it will prevent, or at least reduce, snipe due to locking the material and the machine in place while keeping everything as stable as possible. Because it is automatic, there’s no requirement for having to set it up on your own, thereby minimizing hassle.

Cons of the DeWalt DW735X

Even though the DeWalt DW735X is a great tool, there are a few cons worth noting as well.

The machine runs a little loud.

While it is true that most benchtop planers run a little loud sometimes, the DeWalt DW735X might not appeal to those who are looking for a quieter tool. Nonetheless, if you are willing to sacrifice quietness for added knives in the cutter head system, the higher cutter head speed, and all of its usability features, perhaps the noise level won’t be so much of a con for you.

Although the DeWalt DW735X already comes with ready-to-use blades, a professional might find some of them a little less durable than heavy-duty types. However, you can always buy your preferred blades from your local hardware if you prefer.

What Are the Alternatives to the DeWalt DW735X? 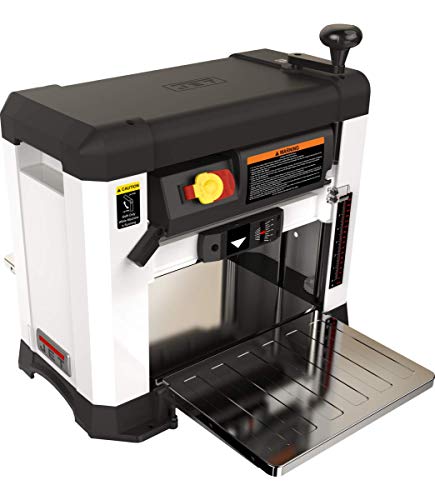 If you feel that the DeWalt DW735X simply isn’t your cup of tea, here are other alternatives I’d like to suggest:

A similar planer to my main pick is the JET JWP-13BT 13-Inch Helical-Style Benchtop Planer. It also runs up to 10,000 RPM for its cutter head speed and even has a durable blade system (helical style) that will cut down on your need to replace the knives often. It also has dual speeds of either 18FPM or 26FPM to adapt to your work materials.

It has a cast iron bed and steel cover well for added durability. Moreover, it has a powerful 2-HP motor, so it is more suitable for woodworkers who are looking for a heavy-duty machine.

Yet another hassle-free machine when it comes to blade replacements is the WEN PL1326 15-Amp 13-Inch Spiral Benchtop Thickness Planer. This machine has a 15-amp motor, although the difference is that it only has one speed (26 FPM). Likewise, it has a depth stop and gauge but I think that the DeWalt DW735X still has a better design in that department.

If you’re not so much into dual-speed units, the DeWalt DW734 Single-Speed Benchtop Planer may be better suited for your needs. It has up to 20,000 RPM (motor) and 10,000 RPM (cutter head) for speed, so it is quite similar to my DeWalt pick above. Although only 12-1/2 inches in its width capacity, the long infeed and outfeed table make up for it.

As a whole, the DeWalt DW735X is a planer worth getting if you want to handle materials such as hardwoods, because of its three-knife cutter head system. It also has a snipe-reducing clamp mechanism that results in less wasted material. I think that this benchtop planer is overall a good choice whether you’re just starting out or already built a couple of projects.

A two-speed benchtop planer that’s great for handling wider materials. The three-knife system speeds up productivity and the depth stop and gauge are great for repetitive cuts.
Check today’s price on Amazon