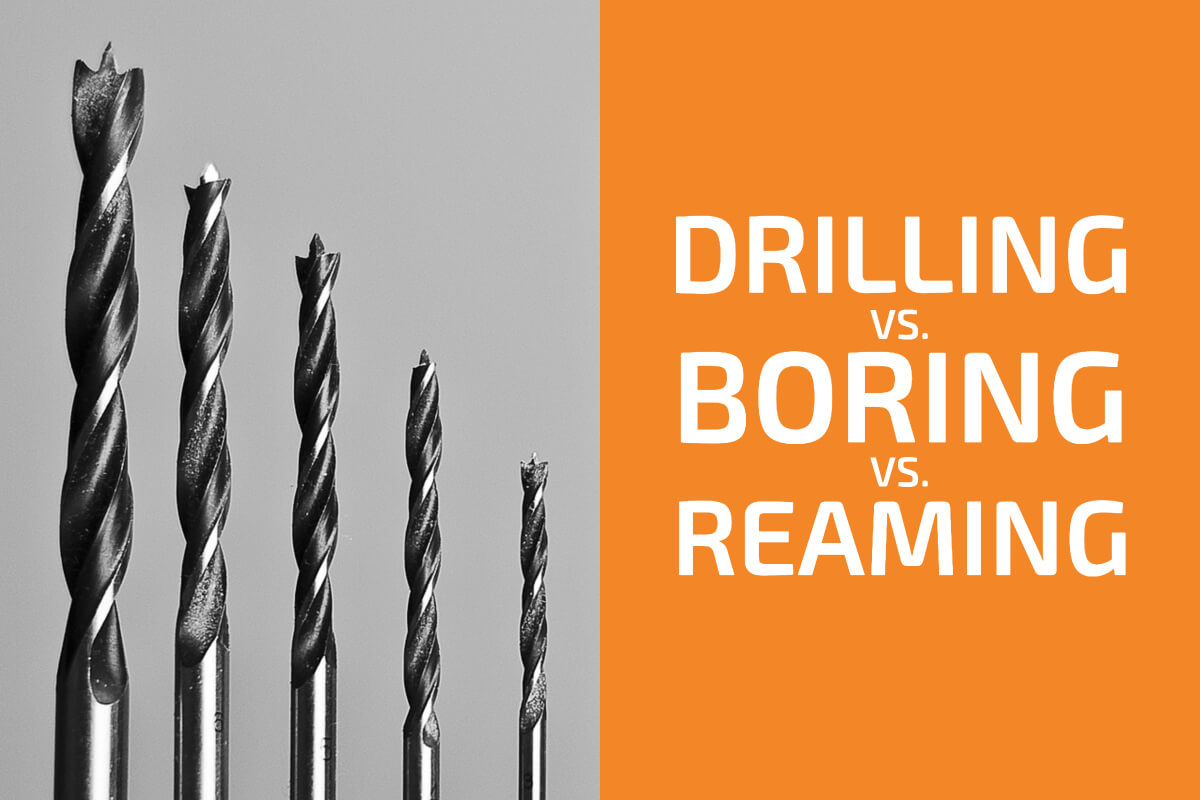 If you are just starting with DIY or haven’t been doing much metalworking, you might not know the differences between drilling, boring, and reaming. After all, they are all processes used to make holes into materials.

Each of them, however, is very different in the way it’s done as well as in the results it achieves.

Drilling, Boring, and Reaming: The Basics

Before jumping into the differences, let’s start by looking at what defines each of the three processes.

To cut the material, a rotary tool – a drill bit – is used. Drill bits come in a wide variety of sizes and types. They are often made of high-speed steel – sometimes with cobalt or titanium mixed in.

The bit is rotated either using a manual hand drill or a power tool such as an impact driver or a cordless drill. Depending on the type of drill bit you use, you can cut holes into many different materials including wood, plastic, and metal.

Boring is a cutting process through which an already existing hole is enlarged. Generally, boring is done after drilling. In the case of mass manufacturing, it can also be done with holes that have been cast as part of the manufacturing process.

The tool most often used for the process is called boring bar. It’s a bit that is attached to either a multi-purpose rotary tool like a lathe or a dedicated tool like a jig borer.

There are several different types of boring, but line boring and back boring are the two most common. While in the former, the boring bar is supported on both ends, in the latter it’s only supported on one end.

As such, while you can only line bore holes that go all the way through your workpiece, you can back bore both such holes as well as “blind” holes.

Finally, reaming is a process through which an existing hole is smoothened. It’s especially used when you need to make holes of a very precise size.

Reamers are bits that can, just like with drill bits, be either rotated manually or using a power tool. They come in a number of different types including straight reamers, tapered reamers, and rose reamers – each suitable for different application.

This process is used almost exclusively when working with metals and alloys.

Drilling vs. Boring vs. Reaming: What Are the Differences?

While all three of the processes that I talk about in this article are used for cutting holes into workpieces, there are some significant differences to be aware of.

The most fundamental – and the most important difference – is that drilling is an “origination” process while boring and reaming are “finishing” processes.

In other words, drilling creates a hole from scratch while the other two processes require a pre-existing hole. The pre-existing hole needs to be smaller than the desired size of the finished hole to allow for the material to be removed in the operation.

Because of the design of the tools used for the processes, drilling is also the only process that can make a hole both deeper and wider. The other two can only make it wider.

In general, cutting tools can be divided into single-point and multi-point tools depending on the number of cutting edges they have.

Precision is one of the main reasons why boring and reaming is used in the first place.

Because of the different construction of drilling bits, boring bars, and reamers, the degree of precision to which they can make a hole of the desired size varies. In other words, their “tolerance” is different.

Obviously, drilling is the “roughest” of the three. Boring is a bit more precise, and reaming is the most precise of the three. The surface finish quality of the three processes goes in the same order as well.

One last difference between the three processes is in the material removal rate (MRR) that each of them provides. Simply said, the amount of material that the operation can remove in a given time period.

Drilling has the highest MRR. Boring has a lower MRR while reaming has the lowest.

At a quick glance, it might make it seem like drilling is a better process. However, not necessarily. The reason for that is that when you bore or ream, you already have an existing hole – and so, the amount of material you need to remove is smaller than when drilling.

As such, all three are fairly fast operations regardless of their MRRs.

Do You Need to Bore or Ream?

In most cases, the answer is a simple “no.”

Whether you are woodworking or working with metals, for the most common applications, drilling a hole without further finishing it with a boring bar or a reamer is more than sufficient.

That said, if you are working with metals and you want your holes to have a nice, smooth finish, you might want to ream them.

More than the above, however, boring and reaming is most often used in situations where precision is really critical. When manufacturing airplanes or other highly precise machines. Where tolerance is very tight.

In such a scenario, a 10 mm drill bit might offer a tolerance of 1 mm. I.e. your hole could end up being anywhere between 9 mm and 11 mm in diameter – not within your requirements.

When dealing with boring and reaming, the tolerances are often smaller than the example I mentioned above. But, the above should still give you a good idea of how the process works.

Chances are that unless you are working on something that requires high precision, you will not need to use boring or reaming. In fact, most handymen will be able to go through their whole life with only using drills.

However, it is still good to know the differences. The differences in both how the processes work as well as in how they are applied.

If you only take away one or two things from this article, remember that drilling is an origination process while boring and reaming are finishing processes. And, remember that in most cases, drilling will be precise enough.