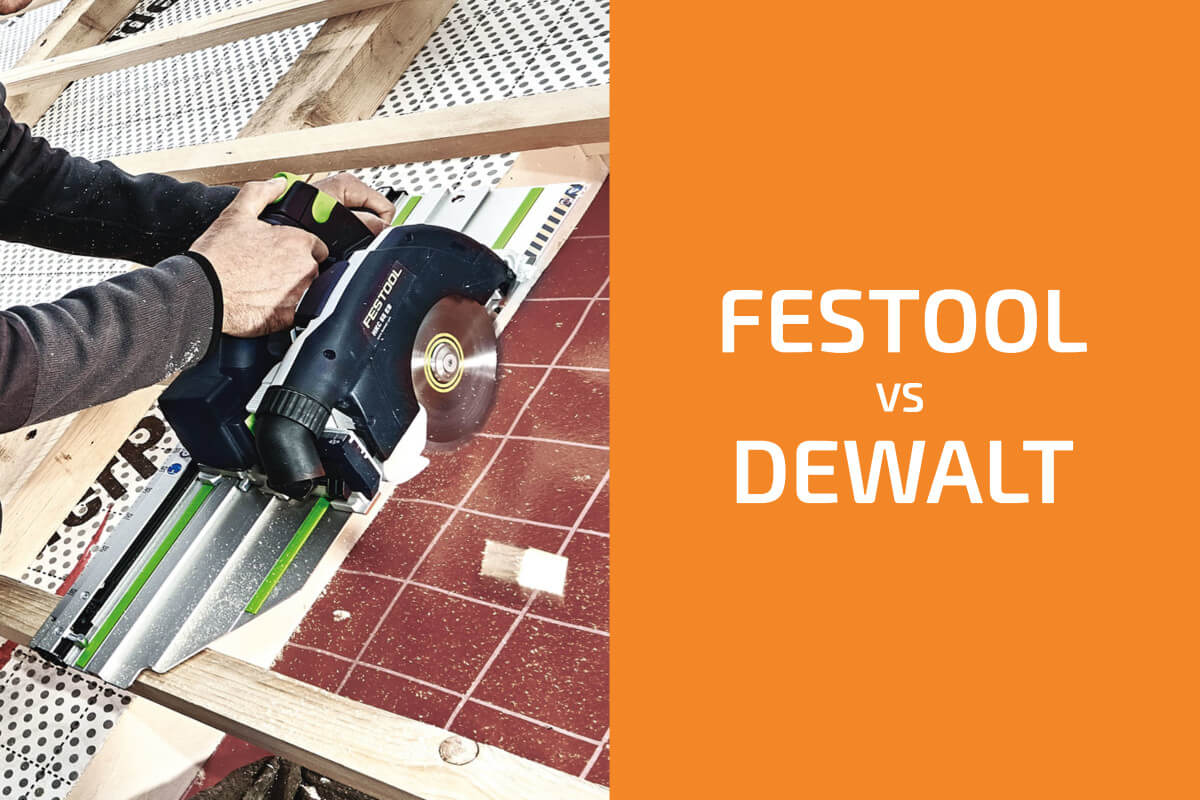 If you are looking to build an impressive arsenal of power tools to fill your shop with everything you need for those long days of work, you are probably looking at some specific brand names. Two popular ones are Festool and DeWalt.

Both are recognizable and reliable, but which one is better? If you are buying a plethora of tools, it’s always a good idea to stick to a single brand name.

Which one will you go with, Festool or DeWalt?

A Brief History of Festool & DeWalt

First off we have DeWalt.

This company was founded in 1923 by none other than Raymond E. DeWalt. It is just 2 years older than Festool. Raymond DeWalt invented the first radial arm saw which happens to be the product that the DeWalt brand name was built on.

The headquarters of DeWalt is currently located in Towson, Maryland. DeWalt is owned by another well-known name, Stanley Black & Decker. DeWalt is at this time one of the most popular, if not the number one most popular brand name in the world of power tools. It is used both by tradesmen and DIYers.

As for Festool, it is also a fairly old and established company. It was founded in 1925 by Albert Fester and Gottlieb Stoll. This is why the company was originally known as Fester & Stoll. In 1933, the company’s name was shortened down to Festo.

Then in 1992, this brand founded the Festo Tooltechnic brand, with a spin-off dedicated to power tools then being created in 2000. That spin-off is what is now known as Festool.

Festool is owned by Festool Group GbbH & Co., currently based in Wendlingen, Germany. At this time Festool is a subsidiary of the TTS Tooltechnic Systems Holding Company, but as a whole, the company remains privately owned by the family of Gottlieb Stoll.

Now, Festool is a very small company, as they have well under 1,000 employees, with a revenue of 340 million Euros since their beginning. What is notable is that Festool was the first brand to create a portable chainsaw back in 1927.

The company is still based out of Germany but operates subsidiaries in 26 different countries.

In terms of quality, both of these brand names are comparable, and not all that much different.

First of all, when it comes to DeWalt, the tools are fairly expensive, more so than those from most other brand names, at least the more basic brand names. However, the price is also translated to their high quality and good manufacturing standards.

In the past, most of the DeWalt tools were manufactured and assembled in the USA, and of course, the USA does have fairly high-quality standards. Now, quite a few of its tools and components are made in China, Mexico, Brazil, Italy, and the UK.

Still, they manage to maintain good quality across the board. 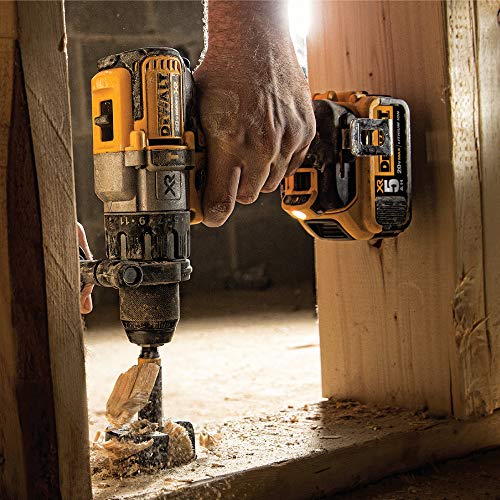 On the other hand, we have Festool, which is one of the few brand names which is even more expensive than DeWalt. While this does depend on a tool to tool basis, a good majority of Festool products will cost three or four times more than DeWalt tools.

Of course, you do get what you pay for, and this is why Festool products are generally regarded as being of very high quality. In fact, many consider them to be the best in the industry.

The other reason why Festool products are generally regarded as being of a higher quality than DeWalt tools is that Festool makes the vast majority of its products in its German factories, and we all know how the Germans have some of the highest manufacturing standards around.

Festool factories are often praised for their solid operations.

Comparatively, Festool makes far more of its products in what could be considered high-quality manufacturing powerhouses than DeWalt.

Something which both of these brands excel at is offering their customers great warranties on the majority of their products.

Now we have Festool, which admittedly does have the better warranties on their products.

All Festool products come with a full 30-day money-back guarantee in case you are not satisfied with them. Next, if your tools fail due to a defect, they will be repaired or replaced for up to 10 years. Besides that, all Festool tools come with comprehensive three-year warranties, plus all tools are eligible for an extra two years of warranty. 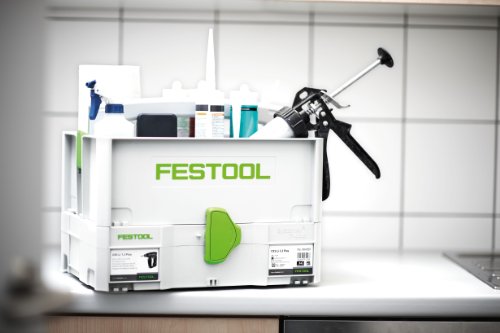 Festool vs. DeWalt: Which Has a Better Product Portfolio?

One factor that rings true here, just like with anything else you might buy, is that quantity is not synonymous with quality. We say this because Festool’s product portfolio, while of a decent size, is not huge. That said, the quality of its tools is very high.

Festool does produce a wide array of both cordless and corded power tools, things like drills and drivers, impact drivers, a variety of saws, dust extraction tools, and more or less anything you would use in carpentry.

Although Festool is very high in quality, and while the selection is not horrible, DeWalt is the definite winner when it comes to pure quantity. We don’t want to be too specific here, because DeWalt makes every power tool known to man. Unlike Festool, it covers tools you might need not only in carpentry, but also in construction and other trades.

If you need a tool, no matter what it is, DeWalt will have at least one option available, which is not something we can say for Festool. Festool products are very application-specific and designed strictly for professional use, while DeWalt tools are marketed to tradesman as well as towards the average Joe. 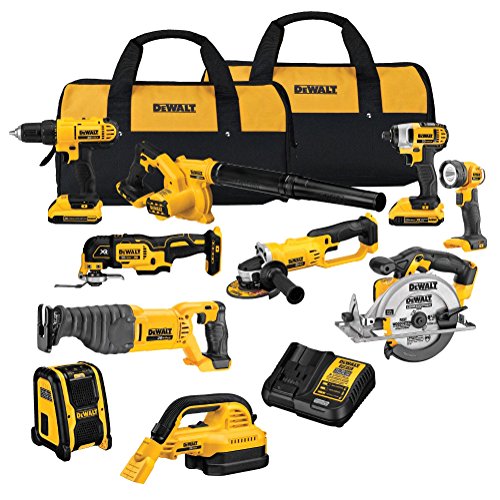 Based on what we talked about above, it is safe to say that DeWalt has a better selection of drills than Festool.

Just based on the website, Festool has about 10 products in the drills section, whereas DeWalt has closer to 100. However, do keep in mind that as mentioned earlier, quality and quantity are not the same things.

Which Brand Offers a Better Selection of Miter and Track Saws?

At this time, DeWalt has a total of 10 track saws and 24 miter saws, compared to Festool, which does not even have a third of the selection.

That said, when it comes to quality, Festool track saws are often regarded as the uncontested winner. 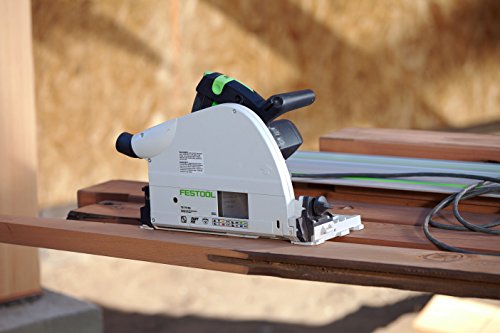 When it comes down to it, if you want awesome products with a great warranty, service, and long lifespans, it’s Festool you want to go for, particularly if you are a professional tradesman. All of that comes at a fairly high cost, though.

On the other hand, while DeWalt is perfectly fine for trades and home use, the products are not quite as high quality, although the selection is much better. Plus, even if they are relatively lower quality than Festool, they are still more than good enough for most use cases.

At the end of the day, both of these brands are great to go with, but if you are a professional who needs super high quality and long-lasting tools, it’s Festool you will want to go for.

If your budget is limited or you need a variety of tools across different trades, then DeWalt might be the better option to go with.

How Do Festool and DeWalt Compare with Other Brands?