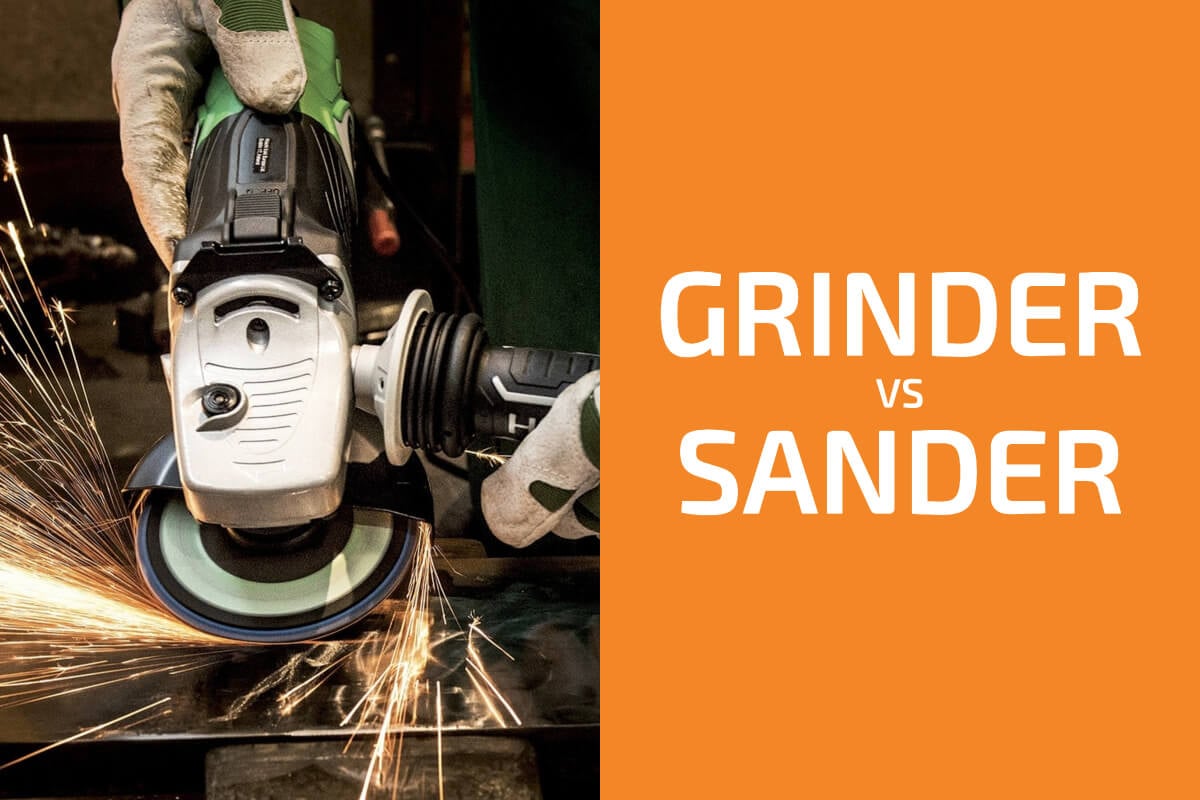 When it comes to working with surfaces of various materials, grinders and sanders are some of the most commonly used power tools.

In this article, you will learn what the differences between the tools are, as well as which tool is the better one to get.

Grinders and Sanders: What Are They?

There are a few different types of grinders. However, in general, when someone says “grinder” referring to a tool, they are talking about an angle grinder.

Besides the tool itself which also serves as its main handle, angle grinders are often fitted with a removable side handle as well.

Just like with grinders, there are a few different types of power sanders. The ones you will most commonly encounter are belt sanders, palm sanders, and random orbit sanders.

While each of them serves a slightly different purpose, in general, sanders are mainly woodworking tools that use sandpaper to smoothen surfaces or to remove existing paint.

As their name suggests, belt sanders have belt-shaped sandpaper that moves around a pair of drums. On the other hand, palm sanders and random orbit sanders use sandpaper pads. The former uses square pads while the latter uses round pads.

To give you an example of each, below is a table showing you my favorite angle grinder and my favorite palm sander.

A corded angle grinder. Made by one of the most reputable power tool companies.

A corded palm sander. Equipped with a dust collector.

Grinder vs. Sander: What Are the Differences?

While there are some tasks that can be done with both grinders and sanders, overall, they are very different tools.

The biggest difference between an angle grinder and a sander is the type of attachments that each of the tools uses.

Angle grinders use rigid discs that come in a wide variety of types, each designed for a specific purpose. Sanders use – as their name suggests – sandpaper belts or pads. The pads are held in place either with velcro or clips.

While there are sandpaper belts and pads with a range of different grits, the variety of sander attachments is much more limited compared to angle grinder discs.

Both grinders and sanders can be used with a variety of materials.

Whether it is sanding of wooden surfaces to smoothen them or of metal surfaces to rid them of paint, power sanders only serve one purpose – sanding.

On the other hand, angle grinders are much more versatile tools.

They can be used to strip metal (or even other) surfaces of paint, as well as to cut metal pipes and other hard materials.  In fact, there are even sanding discs for angle grinders. And, with the right disc, angle grinders can also be used for polishing.

In either case, however, sanders are generally more precise and “gentle” tools than grinders.

One example of that would be when trying to remove old paint from a metal surface.

You could either use a sander which would result in a smoother finish or grinder which – unless you are highly skilled – might leave you with a fairly uneven and rough finish. It’s also important to keep in mind that using the latter would be much quicker, though.

With angle grinders having a rigid disc rotating at a high speed – and being designed to cut things – they are considerably more dangerous to use than sanders are. Especially so when used to cut metals as in those cases there are also many sparks flying out of the material that is being cut.

As such, you will not only want to use gloves but also safety glasses when using an angle grinder.

As for power sanders, they are relatively safe to use. However, they generate a lot of dust. Because of that, you will want to wear a mask when sanding to protect yourself from inhaling paint or wood particles.

Grinder vs. Sander: Which Is Better?

Considering that they are, for a large part, very different tools, it is impossible to generalize which of the two is better. Instead, it is necessary to look at the task you need to get done and then decide which of the tools better suits it.

An angle grinder with the right disc is well-suited for tasks including:

A sander is well-suited for tasks including:

As mentioned earlier, some tasks – especially removing old paint from metal surfaces – can be done using both an angle grinder and a sander. In that case, the better tool for the job will depend on whether you are looking to get the job done as quickly as possible (angle grinder) or as nicely and cleanly as possible (sander).

Both angle grinders and power sanders are very useful tools to have in your workshop. However, they both serve fairly different purposes.

While angle grinders are mostly suited for “rougher” work, sanders are designed for more precise work on. While the former is mostly used when working with metal, the latter is best suited for working with wood.

Because of that, eventually, you will want to have both an angle grinder and at least one sander in your kit. If you are looking to get only one of them, though, then you will need to consider the type of work you will mostly be doing.

When deciding, you should also keep in mind that while sanding can be done manually as well, a lot of the work people do with angle grinders would be fairly difficult to do without a power tool

One Comment on “Grinder vs. Sander: Which One Should You Get?”