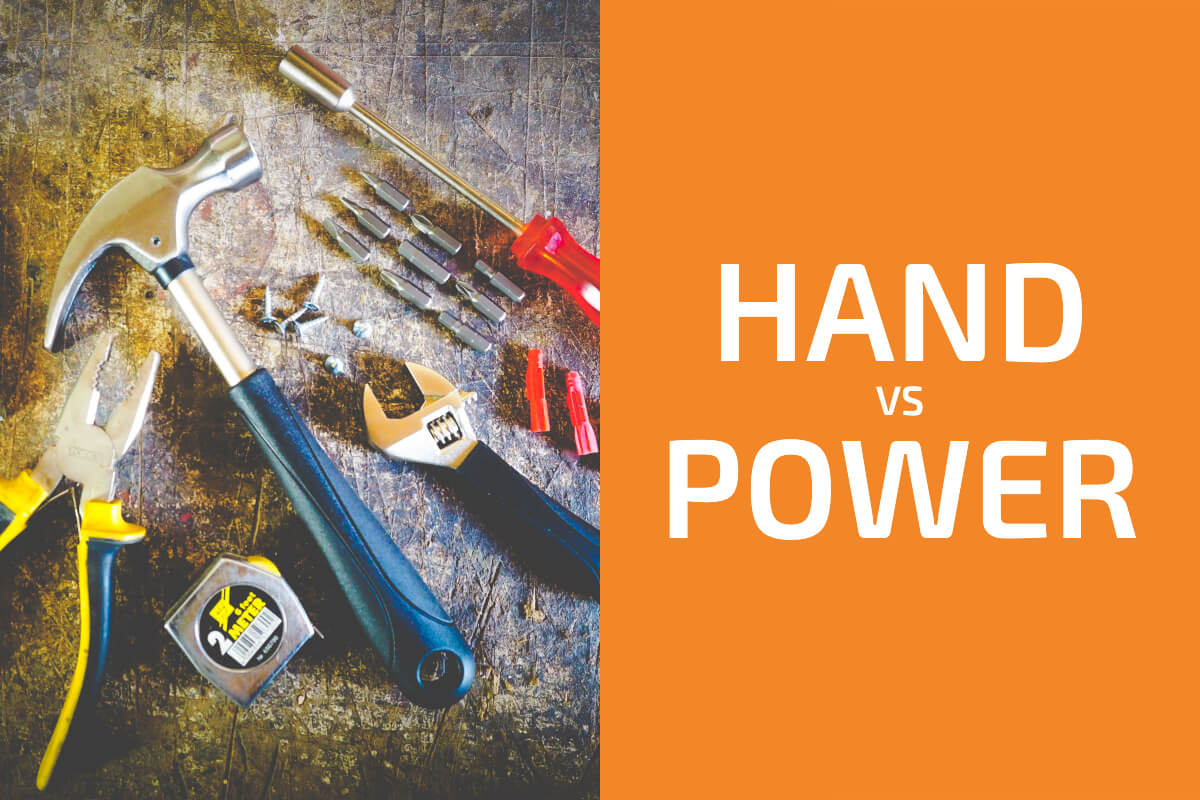 No matter what type of handyman work you do, chances are you are faced with the decision between investing in a power tool or sticking with a manual tool frequently.

While at first, it might seem like going with a power tool, whether electric or pneumatic, is a no brainer, it is not always so. Continue reading to learn why.

The Differences Between Hand Tools and Power Tools

Before jumping into deciding which of the two types of tools are better (sneak preview: it depends…), let’s take a look at what the key differences between them are.

First, let’s start with the obvious one. The main difference between hand and power tools is where they get the energy to perform the task at hand.

While in the first case, all of the energy comes from the tool operator, in the latter case, the vast majority of it comes from an external power source. That power source could either be an air compressor, a power outlet, a battery, or gas.

Even with most power tools, the operator still needs to use a considerable amount of energy to either move the tool around, press it against the workpiece, or to move the workpieces around (in the case of a router table, for example).

However, the amount of energy output required from the operator is minimal compared to doing the same task with a manual tool.

Related to the above is the fact that while one can operate power tools for prolonged periods of time, doing the same work manually for as long can be impossible.

Just as an example, while it is no big deal to manually screw in five or six screws when building a shelf, doing the same when building a wood deck with hundreds of screws is impossible…

…actually, it is not impossible. However, it would take an unreasonable amount of time.

With that, power tools are much faster than hand tools in two ways.

First, there is the benefit of being able to perform a single task faster. For example, it is much faster to cut a board with a circular saw than with a handsaw.

Second, there is the benefit of virtually unlimited energy available at your disposal. Unlike muscles, power tools don’t need nearly as much “relaxation time” allowing you to work with fewer breaks and to finish your work in fewer days.

For some tasks, the relative lack of power of a human hand compared to a power tool’s motor or to compressed air doesn’t matter. For example, almost anyone can drill a hole into a piece of wood with a manual drill or cut a thin metal pipe with a hand saw.

However, for some tasks – especially on a larger scale – hand tools are indispensable because of their power. That’s the case with things like drilling into concrete or cutting large and thick pieces of hard materials.

While there are craftsmen that are extremely consistent even when using hand tools, properly set-up machinery is usually a winner in this aspect.

Take the task of cutting a board in half, for example. If an amateur cuts it with a handsaw, chances are the cut will be slightly off (and in a different way) each time.

Teaching that same amateur to use a circular saw safely, he will be able to get a much more consistent cut over multiple boards.

In terms of precision, there are two things to keep in mind.

Over the last couple of decades, prices of power tools have decreased. With that, it is not uncommon to see tools in the $20 – $30 range in hardware stores.

Even with that, however, hand tools are in most cases still considerably cheaper than their electrically-, gas, or pneumatically-powered counterparts.

Finally, hand tools are – mainly because of their lack of power – generally safer than power tools.

That said, you can still get injured using both types of tools.

Hand Tools vs. Power Tools: Which Are Better?

As you can see above, both hand tools and power tools have their advantages and disadvantages. Because of that, it is impossible to tell which are better.

Instead, you will have to look at your own situation and decide whether the cheaper price of hand tools (and their relatively safer operation) justifies the extra physical effort required on the part of the operator and their slower speed. When doing simple tasks at home like assembling a piece of furniture or fixing a doorknob, that might be the case. In that case, make sure to check my favorite hand tool brands.

However, if you are planning to do something heavier-duty like build yourself a deck – or if you are planning to do woodworking or similar as a hobby or a profession, you will in most cases need power tools as well. In fact, in many cases, you might benefit from having both the manual as well as the power version of the same tool in your kit. For my favorite power tool brands, read this article.

While hand tools have a longer history than power tools and are still highly relevant, the latter have largely replaced them in performing many tasks.

Power tools are not only faster and stronger but unlike humans, they don’t get tired. As such, they allow for quicker finishing of tasks with much less effort.

That said, there are also use cases – like when you need to only screw in a couple of screws every once in a while – where getting a power tool might not make sense. In those cases, hand tools remain an excellent and perfectly viable alternative.