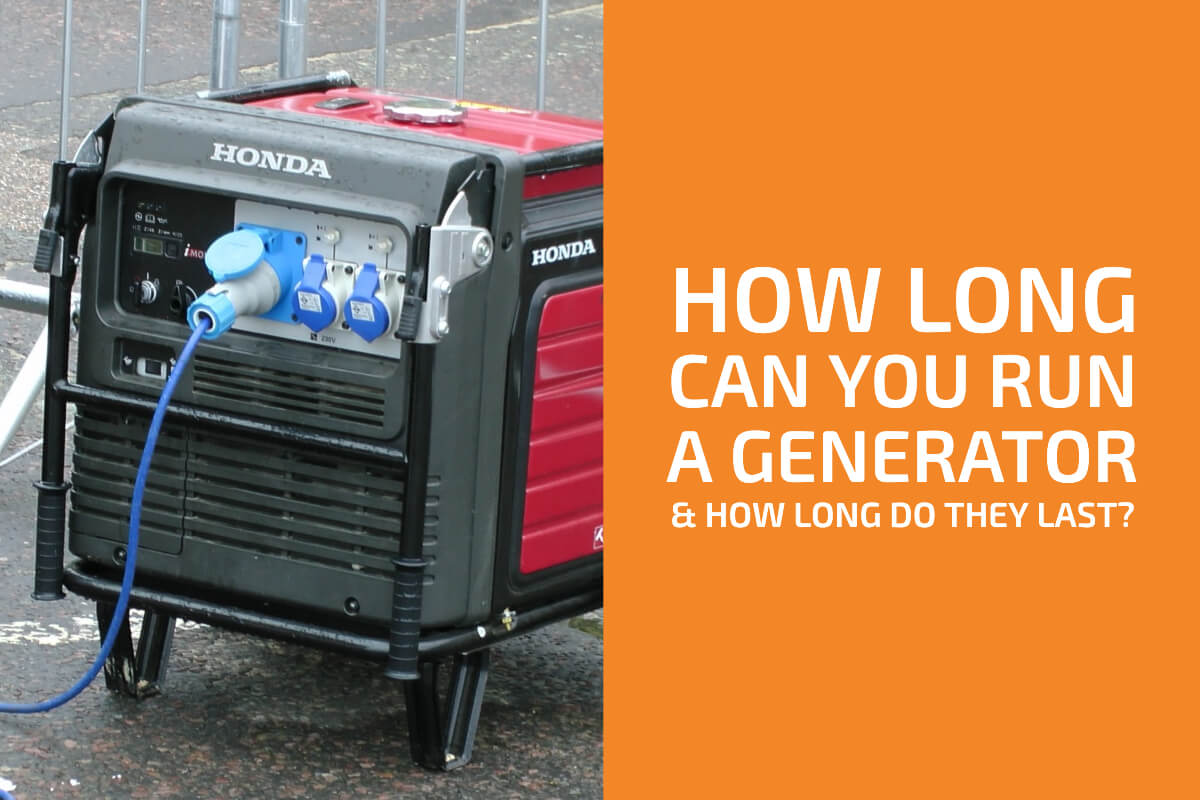 Imagine that you want to use a corded power tool far from a power outlet. Or that you run a small stall without access to utilities. Or that a storm hits your town and you lose electricity for half of the day or more.

These are all situations in which having an engine-generator, or generator for short, can be extremely helpful.

As much as a generator can be a useful piece of equipment, it is important to keep in mind that it isn’t designed to run continuously for days. Instead, it’s designed to run for a few hours at a time. Keep on reading this article to learn more about how long generators can run without a break, as well as how long they last.

How Much Fuel Do Portable Generators Consume?

To understand the limitations of how long power generators can run for continuously, it’s important to first understand how much fuel these machines consume. While there are generators that use propane, natural gas, or diesel, the ones you will encounter most commonly will use gasoline. As such, that’s what we will focus on in this article.

The actual fuel consumption will, of course, depend on a variety of factors – mainly on how efficient the engine of the generator is, what its power output is, and how much power you are actually using.

How Long Can a Generator Run Continuously?

The need to add oil, do maintenance, and so on are all factors limiting how long a generator can run without a break. However, just like with a car engine, the main thing that limits a generator’s runtime is its fuel capacity.

You can simply divide the generator’s fuel capacity (assuming you are starting with a full tank) by its fuel consumption rate to get its maximum runtime. In reality, the runtime will depend on how much power you use and so on, however, that formula should give you a decent estimate.

In fact, in most cases, you will find the maximum runtime of a generator in the product’s specs. This number is usually based on a 1/2 load – i.e. on using half of the power that the machine is capable of generating.

On average, generators can run continuously for anywhere between 7.5 and 12 hours. To give you a better idea, below are some examples of actual generator models and their runtimes (in case they take multiple fuels, the numbers are applicable when using gasoline):

Are There Generators That Can Run Non-Stop for 24 Hours?

The vast majority of portable generators cannot run for 24 hours non-stop. Once again, the simple reason for that is the fact that their tank is too small to accommodate enough fuel for that.

However, there are some generators that can run for a day without a break at 1/2 load. One of those is the Stanley 5000 Watt All Weather Generator.

In addition to that, there are larger generators – mainly aimed to be used as a back-up source of power at homes – that can run for 24 hours or even longer. These are often powered by propane or natural gas as using gasoline in these would be very expensive.

How Long Do Generators Last?

When it comes to the lifetime of generators, there is the time that the manufacturer will guarantee the product to work for and the actual number of years you will be able to use it for.

Power generators generally come with a 2- or 3-year limited warranty. And so, you will be able to use them – as long as you use them in line with the instructions provided by the manufacturer – for at least that long.

In reality, however, chances are that your generator will last much longer than that. While it depends on the model as well as the average load, most portable generators will last anywhere between ten and twenty-thousand run hours.

As such, if you use your generator for just 500 hours a year, for example, it could last you as long twenty to forty years. That is assuming you oil it when it needs to, maintain it regularly, and so on.

On the other hand, if you run a food stall where you need to be running a generator for 8 hours a day, 7 days a week, it will likely only last you a few of years before you will need to replace it.

A portable generator is an essential piece of equipment in many situations. It can help you generate power to run your tools far away from a power outlet without having to run long extension cords. And, it can help power your food stall or your house when there is a power outage. However, its runtime is limited, mostly by its fuel capacity. While there are generators designed to run longer, most of them can run for about 8 to 12 hours at a time.

Their runtime is also what generally defines how long they will last you. Most commonly available portable generators can handle a lifetime runtime of anywhere between ten and twenty thousand hours at 1/2 load.

That means that if you only use the generator during occasional power outages, it can last you more than a decade or two. On the other hand, if you are running your generator constantly, it will need to be replaced within just a couple of years. In either case, before buying a new generator, make sure to check this list of reasons why it won’t start.