Some of the power tools that are the easiest to confuse with each other are impact drivers and impact wrenches. In fact, when you search for one on the Internet, you will often get results including the other.

However, they are two very different tools. They use different attachments and they are designed for different purposes. In this article, I will take a look at those differences – as well as at which of the tools you should get – in detail.

In many ways, impact drivers and wrenches are similar tools. As such, before looking at the differences between them, let’s start by taking a look at what defines each of the two tools first.

A cordless impact driver with a battery and a tool case. Made by my favorite power tool company.

A cordless impact wrench with batteries and a tool bag. Perfect for heavy-duty applications.

Impact drivers (we’re talking about the power tools here, not manual impact drivers) have, over the years, became a staple in many workshops. While at first sight, they are similar to drills, they work on a slightly different mechanism.

They deliver strong and sudden rotational force that is designed to drive screws into a material (or to remove them). Besides that, they can also be used for tightening and loosening bolts and nuts, as well as for drilling holes.

While corded impact drivers can be useful in certain applications, most of them are cordless. In either case, they are exclusively electrically powered.

More or less all major power tool manufacturers like Makita and DeWalt have a variety of different models of the tool in their portfolios. The models differ in the “extra” features they offer as well as the power they deliver.

The most popular impact drivers are 18V, but 12V and 14V drivers are available among others as well.

Unlike impact drivers, impact wrenches are nowhere near as popular.

That comes as no surprise considering that they can almost exclusively be used only to tighten and loosen nuts and bolts. They come in two types based on the size of sockets they can accommodate – the more common 1/2″ and the less common 3/4″.

Even though most manufacturers that make impact drivers also make wrenches, usually they do not offer as many different models.

They can be either powered electrically or – in some professional applications – pneumatically. Electrically powered ones are available in both corded and cordless versions.

Impact Driver vs. Impact Wrench: What Are the Differences?

Now that you know the basics about each of the tools, let’s take a look at the major differences between them.

The biggest difference between the two tools, besides the different way bits and sockets attached to them, is the torque they can deliver.

Being designed for tightening even the largest nuts and bolts, impact wrenches can deliver considerably more torque than impact drivers.

In fact, while impact drivers generally have their maximum torque denoted in inch-pounds, in the case of impact wrenches, it’s usually foot-pounds. The latter is a unit twelve times larger than the former.

Just to give you an example, the Makita XPT02Z impact driver can deliver a maximum torque of 1,330 inch-pounds. On the other hand, the XWT08XVZ impact wrench can deliver up to 740 foot-pounds of fastening torque. That’s 8,880 inch-pounds or more than 6.5 times more than the driver.

As I indicated earlier, an impact driver is a much more versatile tool than an impact wrench.

An impact wrench has one use only – tightening and loosening nuts and bolts. To an extent (i.e. at a much lower torque), an impact driver with socket bits can do that with as well.

It can do much more than that, though.

As its name suggests, with the right screwdriver bit, it can drive basically any screw. It can also be used for light drilling. And, it can be used for other applications like mixing paint as well. That is, as long as you have the right bits and attachments. 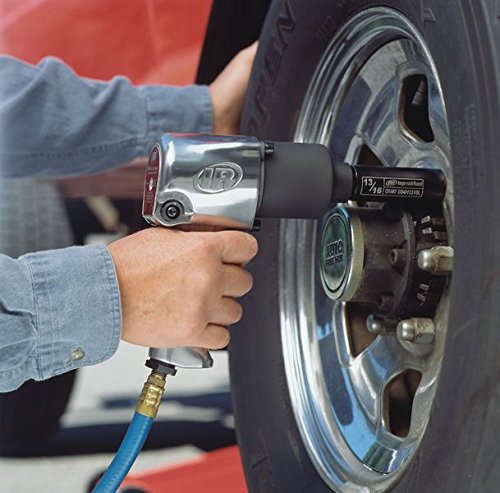 Both impact drivers and impact wrenches come at a large variety of price points ranging from entry-level all the way to high-end. Like with many other things, a higher price point also usually means higher quality and – in some cases – more functionality.

That said, when comparing tools of roughly the same quality level, impact wrenches tend to be – generally – slightly more expensive than impact drivers.

Considering the difference in power, it is natural that impact wrenches tend to be larger as well as heavier than impact drivers. The difference is mainly caused by the former’s larger motor.

Let’s take the same two tools made by Makita that I compared earlier when I talked about torque. While that impact driver is just 3.9 pounds including battery, the impact wrench is 7.9 pounds – almost double.

While they both have similarly sized handles, the main part where the motor can be found is considerably larger on the XWT08XVZ impact wrench.

Because of the differences in size and weight, impact drivers are generally more comfortable to use for prolonged periods of time than wrenches.

In fact, not only are impact wrenches heavier and bulkier, but they are also much louder than impact drives.

The one last difference that I want to mention is the way the two types of tools are powered.

The reason for that is simple – impact wrenches need more power to deliver higher torque. It’s because of that reason that air impact wrenches – those powered by compressed air – exist as well.

They were much more common in the past before cordless power tools were as advanced as they are today. However, even today, they are still widely used by certain professionals like car mechanics.

Impact Driver vs. Impact Wrench: Which One Should You Get?

There are numerous reasons for this.

First of all, except for some very specific applications where very high torque is required (like tightening car wheel nuts), you can use an impact driver as an impact wrench. All you have to do is get a set of socket bits.

Second, not only will you be able to tighten nuts and bolts with your impact driver, but you will also be able to drive screws and drill holes into softer materials like wood and plastic, and even into some metals and alloys.

Third, since an impact driver is more compact and lighter, you will be able to save some (although very little) space in your workshop. And, your hand will get less tired using the tool.

Finally, you will also most likely save some money. On average, impact drivers tend to be cheaper than impact wrenches.

All that said, if you are planning to use the tool for some very specific application – like the aforementioned tightening of car wheels – then get an impact wrench.

Regardless of which of the two you get, I recommend getting a cordless 18V tool.

While impact wrenches are an important tool for car mechanics, heavy-duty construction workers, and so on, they are more of a specialty tool. They are designed for one thing only – for tightening nuts and bolts at very high torque.

On the other hand, impact drivers are more of a general-purpose, versatile tool that can be very useful to the regular handyman. They, of course, excellent for driving screws. But, they can also be helpful in tightening nuts and bolts as well as drilling holes.

One Comment on “Impact Driver vs. Impact Wrench: Which One Should You Get?”