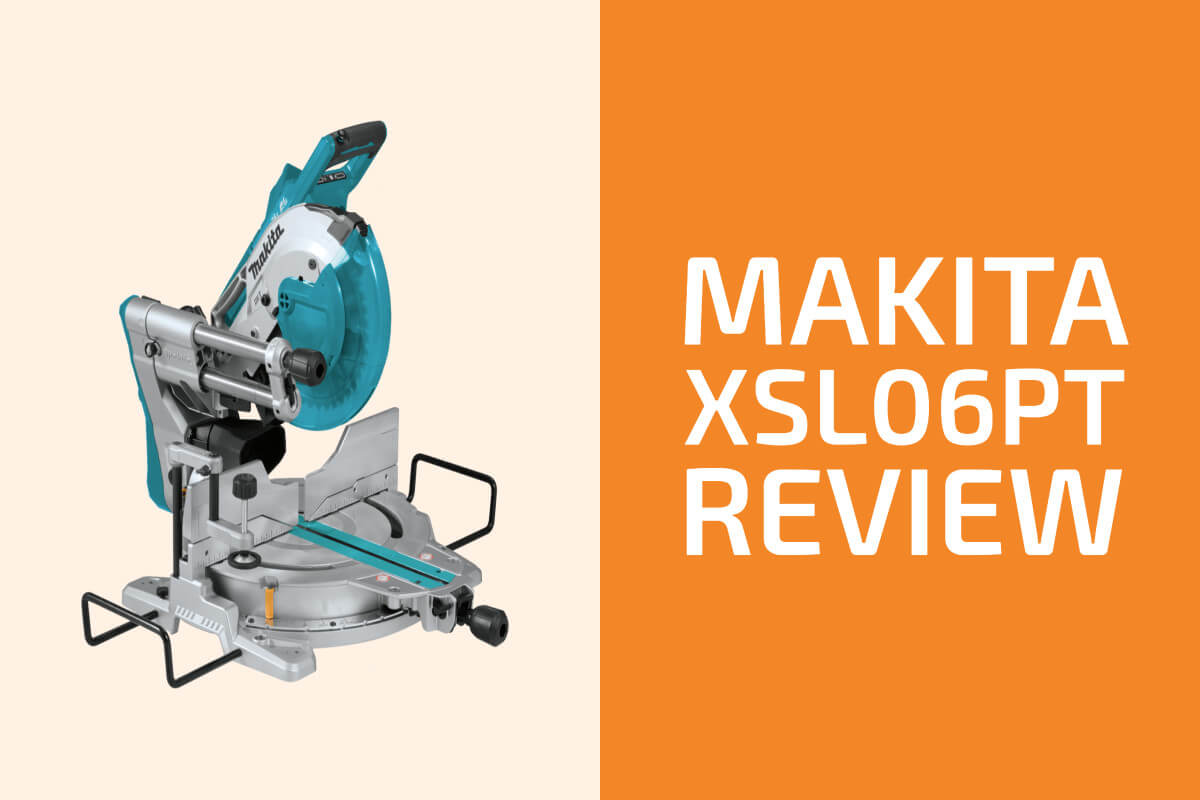 For those with jobs that require frequently moving from room to room, the Makita XSL06PT Cordless 10-Inch Dual-Bevel Sliding Compound Miter Saw is for you. This cordless miter saw is a change of pace from your usual 12-inch corded ones so you will find it useful for most cutting projects.

I will review this 10-inch miter saw by checking out its pros and cons to help you decide whether to buy it or pass.

A well-rounded cordless compound miter saw made by Makita. Being dual-bevel and sliding, it can accomplish most tasks easily.
Check today’s price on Amazon

As a miter saw, this is a cordless one so you can work on areas even without an extension cord to power it up, allowing mobility.

Its miter measurements are from 0 to 60 degrees (left and right), with positive stops at 0 15, 22.5, 31.6, 45, and 60 degrees. Bevel adjustments can go as far as 48 degrees, which is higher than with most dual-bevel sliding compound miter saws out there. 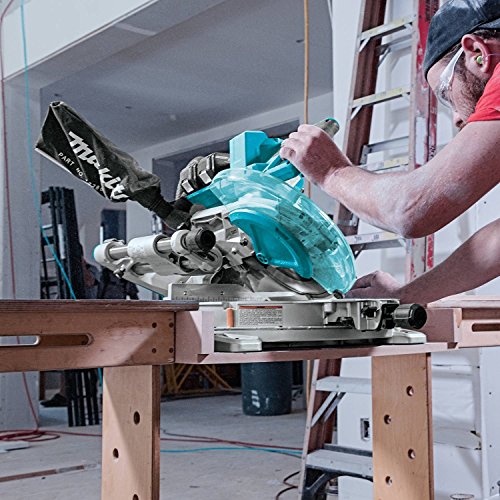 The miter saw is backed by a 3-year limited warranty from the manufacturer. When you order, it comes with a hex wrench, dust bag, triangular rule, a vertical vise/clamp, and the 10-inch saw blade.

When it comes to durability, the saw is made with a 60T carbide blade. It also uses an electronically-controlled BL brushless motor that will help the unit to run cooler and therefore, extending the lifespan of the tool. This is important if you always tend to work in areas where a warm temperature is a problem.

The Automatic Speed Change technology is yet another feature that will lengthen the motor’s life because it adjusts the torque and cutting speed based on what will be cut. The dual dust collection ports will also make the unit more durable because debris won’t easily get into the internal parts if the dust extraction setup is good.

On the electronic controls, it uses the Star Protection technology. This allows the tool and the battery to communicate well so that the unit will be protected against over-discharging, overloading, and overheating. Moreover, because it uses lithium-ion batteries, it will have no memory effect. This means the battery’s charge will not easily drain when it is not used compared to traditional batteries.

The design of the direct-drive gearbox is also well-thought because it has no belts to slip or replace. This means that motor efficiency will increase. I also like the inclusion of an electric brake which is not just a convenient feature for speeding up productivity but also lessening the wear and tear of the mechanical parts of the miter saw.

What I like with the usability of this tool is the 2-steel rail sliding system, which glides smoothly for making easy and accurate cuts. The design of this sliding system doesn’t take a lot of space and can be positioned flush against a wall – great news for folks who have limited work area footprint in their shop or job site.

It has an in-front bevel lock that allows for easy operation without compromising accuracy. Speaking of accuracy, I like that this one has a built-in laser that will guide you on the line of cut, saving time, and wasted effort on mistakes. Not all miter saws in the market have lasers so this is going to be a big advantage.

The electric brake is a plus point since it will reduce cutting time when you are working with repetitive tasks. You don’t have to wait for the saw blade to stop for a few seconds if the electric brake comes into play, allowing redundant cuts on more materials.

Last, but not least, the fact that it is battery-operated reduces the need to look for an extension cord or limit your operational area. If you are working on a deck project or moving the saw from room to room, a cordless miter saw like this one would be a better choice. 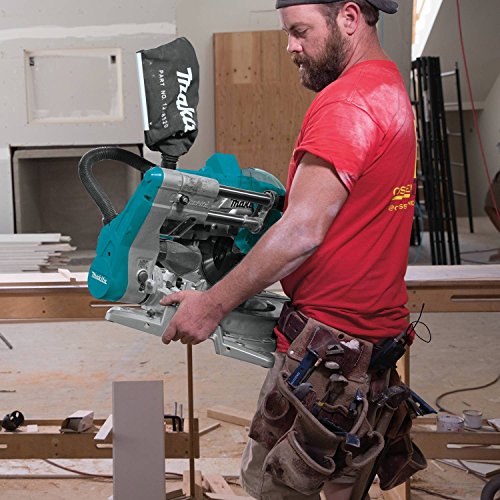 Should You Buy the Makita XSL06PT Miter Saw?

The Makita XSL06PT is the miter saw for you if most of your work is done between different rooms, such as home remodeling or repair, deck building, and the like. The saw is cordless, which allows you to move easily, while its 10-inch blade is already capable of cutting common lumber sizes.

Not to mention, it has a multitude of usability features such as a laser guide, a 2-steel rail sliding system, an in-front bevel lock, and an electric brake. These will help speed up work without ruining the accuracy.

If you are still unsure about the decision, go through the below list of the pros and cons of the tool.

Pros of the Makita XSL06PT

It is a cordless miter saw.

By having a battery-operated miter saw, it will become easier to work with projects outdoors where an extension cord or outlet is difficult to access. This will allow better flexibility, especially if you are only making small to medium-sized home repairs.

The cutting speed is high for a 10-inch saw.

At 4,400 RPM, this value is considered high when it comes to 10-inch saws, as the norm would be around 4,000 RPM. A high speed will increase productivity and save time.

It has an electric brake.

Electric brakes will allow you to make repetitive cuts with minimal pauses in between. This helps speed up redundant tasks without losing accuracy.

The motor is brushless.

A brushless motor will increase the overall lifespan of the miter saw as compared to one that uses traditional carbon brushes.

Cons of the Makita XSL06PT

Even though the Makita XSL06PT is a great tool, there are a few cons worth noting as well.

It’s not that lightweight compared to similar saws.

At 60 pounds, it’s not exactly the lightest in weight despite being a cordless saw. Nonetheless, it won’t be an issue for you if tool stability is what you’re looking for.

Although the laser guide is helpful for precise operations, it may take some learning curve on adjusting it properly.

What Are the Alternatives to the Makita XSL06PT?

If the Makita XSL06PT simply isn’t the miter saw for your needs, don’t worry – I have some other suggestions similar to it, such as the following:

The Makita LS1019L (read my review) is a similar 10-inch dual-bevel saw that has a laser guide for accurate cuts. The crown nested capacity is also the same at 6-5/8 inches as well as a 5-1/4-inch vertical cutting capacity. It also has a 2-steel rail sliding system, a soft start feature, a 15-amp direct drive motor, and has an electric brake.

However, there are a few differences, such as the cutting speed, which is only at 3,200 RPM compared to the 4,400 RPM speed of the Makita XSL06Z. It is also much lighter in weight at only 57.9 pounds compared to my main Makita pick above.

Also a laser-equipped unit, the Metabo HPT C10FSHCT 10-Inch Sliding Miter Saw has a 15-amp motor that has an ergonomic upfront bevel lock for quick adjustments. Sliding is also easy using the fixed rails and the zero rear clearance system.

This saw is also quite lightweight at only 45.2 pounds and the slide system will also reduce saw footprint since you can position the saw to nearly flush against a wall or on a benchtop. This one is backed by a much longer 5-year warranty.

Yet another 10-inch tool is the Bosch CM10GD Compact Miter Saw (read my review), which is also dual-bevel but has a unique axial glide system that’s easier to operate than most sliders. It is complete with a dust chute, vacuum adapter, 4-1/4-inch sliding fences, and a crown/chop lock for accuracy during crown molding.

As for the speed, it is at 4,000 RPM, which is roughly similar to the speed of the Makita XSL06Z. It has a 47-degree bevel capacity which is also almost at par with my main Makita pick.

Overall, the Makita XSL06PT is a sound choice when it comes to working between rooms.

Although it is not as lightweight as corded units due to its battery, having no dangling wires to worry about will help with workplace safety. It has most of the features found in a corded miter saw such as an electric brake and a laser guide so those will increase your productivity.

A well-rounded cordless compound miter saw made by Makita. Being dual-bevel and sliding, it can accomplish most tasks easily.
Check today’s price on Amazon