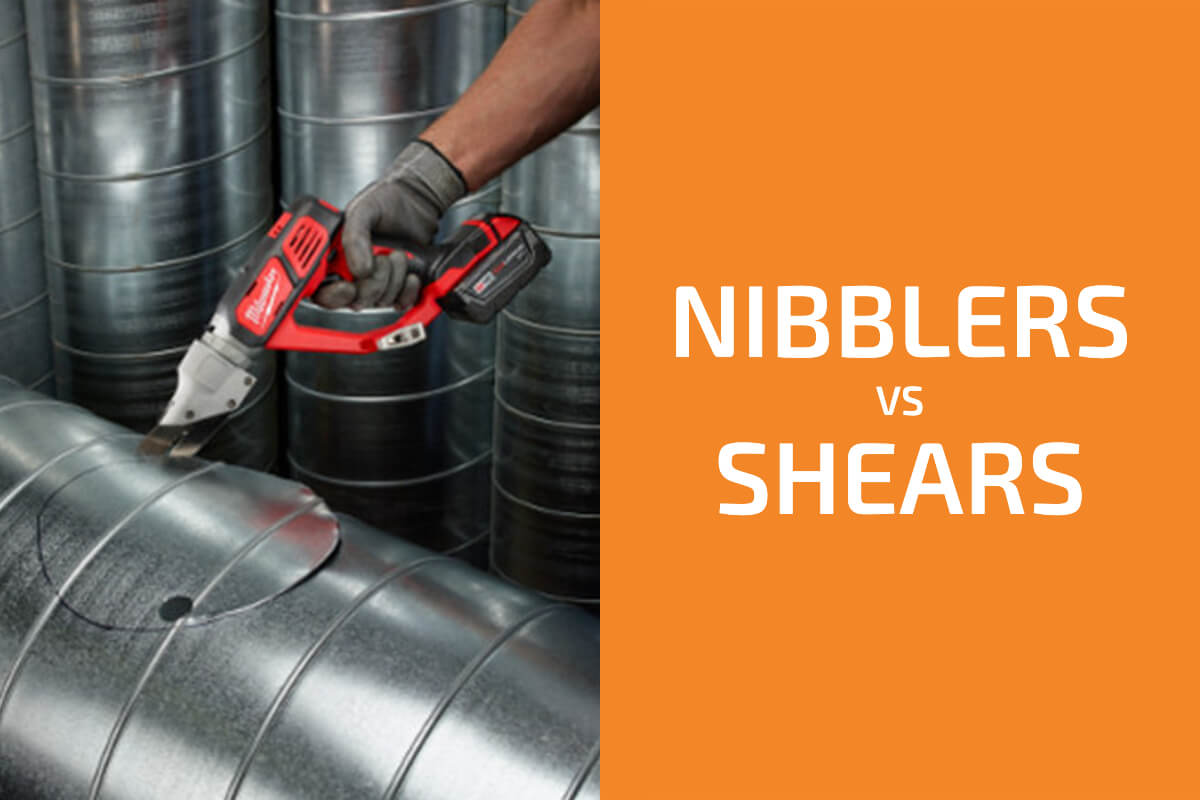 Nibblers and shears are two of the most common tools used for cutting sheet metal.

There are power tool and hand tool varieties of either tool, but this article will focus on the power tool option. They are generally electric-powered and allow the user to glide them along a piece of sheet metal, cutting it where necessary.

In this article, I will take a look at the differences between the two tools and help you choose the right one for your job.

Nibblers and Shears: The Basics

Before jumping into the differences between the two tools, let’s take a brief look at the basics of each.

What Is a Nibbler? 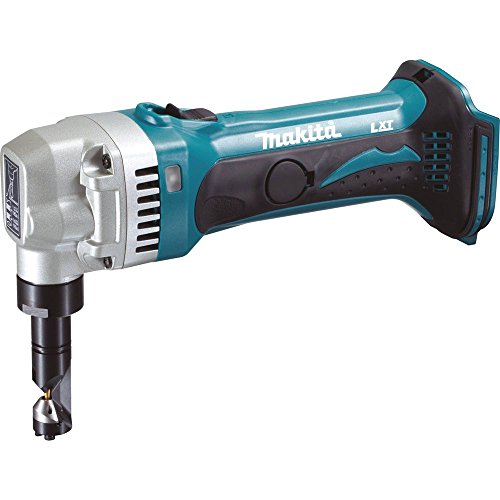 A metal nibbler is a small, hand-held cutting tool. There are a fixed die and blade on the shaft of the nibbler that cut metal as the tool moves across the sheet. Since the blade is so small, it can cut really tight radiuses that a lot of other tools simply can’t.

Additionally, due to the size and design of nibblers, they can cut extremely fast. They will glide along the top of the sheet metal without any problem. 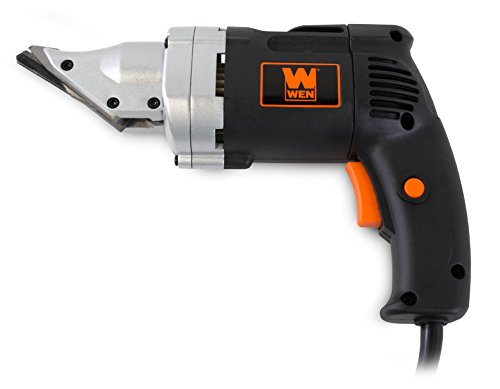 Shears are also a small hand-held cutting tool. Their composition is similar to scissors, but they’re used for sheet metal. They are a clumsier alternative to nibblers, since the blades are wider, and the cutting position is a bit more awkward.

Shears come in a single- and double-cut option.

Single-cut shears have sharpened blades on the top and bottom of the jaw, with the sharp areas both facing one another. Opening and closing the jaws will slice cleanly from both sides. These are the most comparable to scissors.

Double-cut shears actually use two separate cutters on the bottom face, arranged in a V-pattern. The top piece of the jaw is flat, with a slot along the middle. The cutting is only done by the bottom jaw being driven into the top. Due to this geometry, it’s harder to cut tight radiuses with a double-cut shear and a lot harder to work on a curved surface. The benefit is that the cut is cleaner, doesn’t warp the material, and is done through a smoother cutting motion.

A corded nibbler made by one of the best known brands.

A corded metal shear with a swiveling head.

Nibbler vs. Shears: What Are the Differences?

Even though both nibblers and shears are used to perform the same function, there are a few noticeable differences between the tools.

The biggest difference between the two tools is how quickly you can cut a sheet. Shears are the slower tool of the too. Also, due to the geometry of shears, it takes longer to cut a curve.

Nibblers, on the other hand, are the fast alternative. They glide along a piece of sheet metal exactly how an X-Acto knife would glide along a sheet of paper.

Even though nibblers are very fast at cutting, they create a lot of mess while cutting. They will throw metal waste all around the job site. If you’re concerned with the clean up after your job is done, or you’re working on a delicate project, you won’t want to use nibblers.

Shears will isolate the mess due to the method of cutting they use. Typically you will have a single, winding piece of scrap sheet metal that travels out of the top of the machine, and coils as you cut. 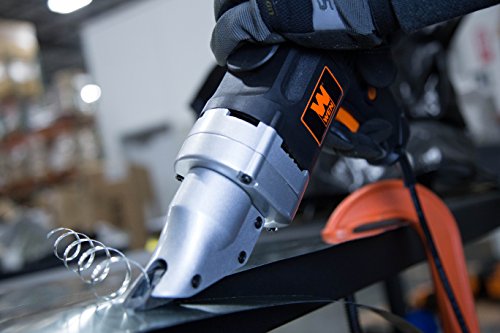 Kerf is the material removed when cutting a piece. For example, if you cut lumber with a hand saw, your cut slot will be the width of the saw’s blade. This holds true in sheet metal cutting as well.

The kerf on a nibbler is fairly wide. This means that your cut material will have a thicker slot cut along the tool path.

Shears, on the other hand, can have a very minimal kerf. Using certain sheet metal shears, you will minimize the kerf of your cuts.

Though it is not hugely different, there is still a difference in the radius you can cut with either tool. Since the nibbler glides along the top of the sheet metal, you can achieve much more accurate and tight radiuses.

On the other hand, since the shears are larger and clumsier, it is tougher to get the same precision. On a single pass, the bulky shears will never achieve the same smooth curve, but you can do multiple cuts and approach from different sides to achieve results similar to a nibbler. In some cases, that is not a possible option, though. 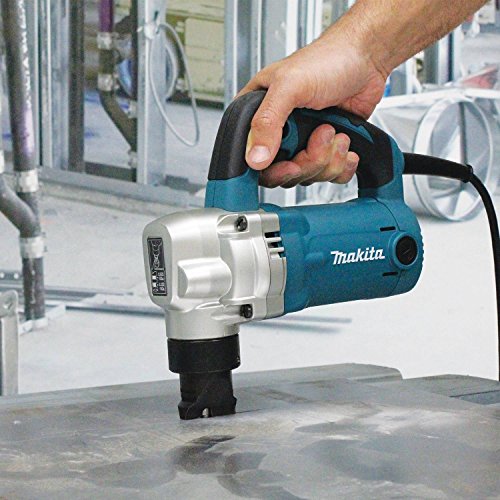 Even though these two tools will give you a comparable final result, the answer isn’t so straightforward.

It is worth mentioning upfront that if you are cutting a curved face or need to cut tight radiuses, you should not consider double-cut shears – they cannot cut in those circumstances.

If you’re working on a piece where you need the work done fast, accurately, with tight radiuses, and you don’t care about the mess, you need to pick nibblers. The nibblers will glide quickly along the top of the sheet metal and cut smooth curves. Should you decide to get a pair, make sure to check my article about what the best sheet metal nibblers are.

On the other hand, if your project requires a bit more precision, less mess, and time isn’t essential, you should go with shears. They will cut your sheet metal just as well as nibblers, but they will not make as much of a mess. The only trade-off is it takes more time to cut with shears. But the kerf is much smaller with shears so your final product will look cleaner.

You can see my favorite shears here.

In most cases, you will be able to get your job done with either of the tools. They are both designed for cutting sheet metal and both do the job very well.

However, if you are working on projects where accuracy is more important than cleanliness, you should go with nibblers. They will also cut much cleaner curves. On the other hand, if you want to keep your workspace as clean as possible, go with shears.