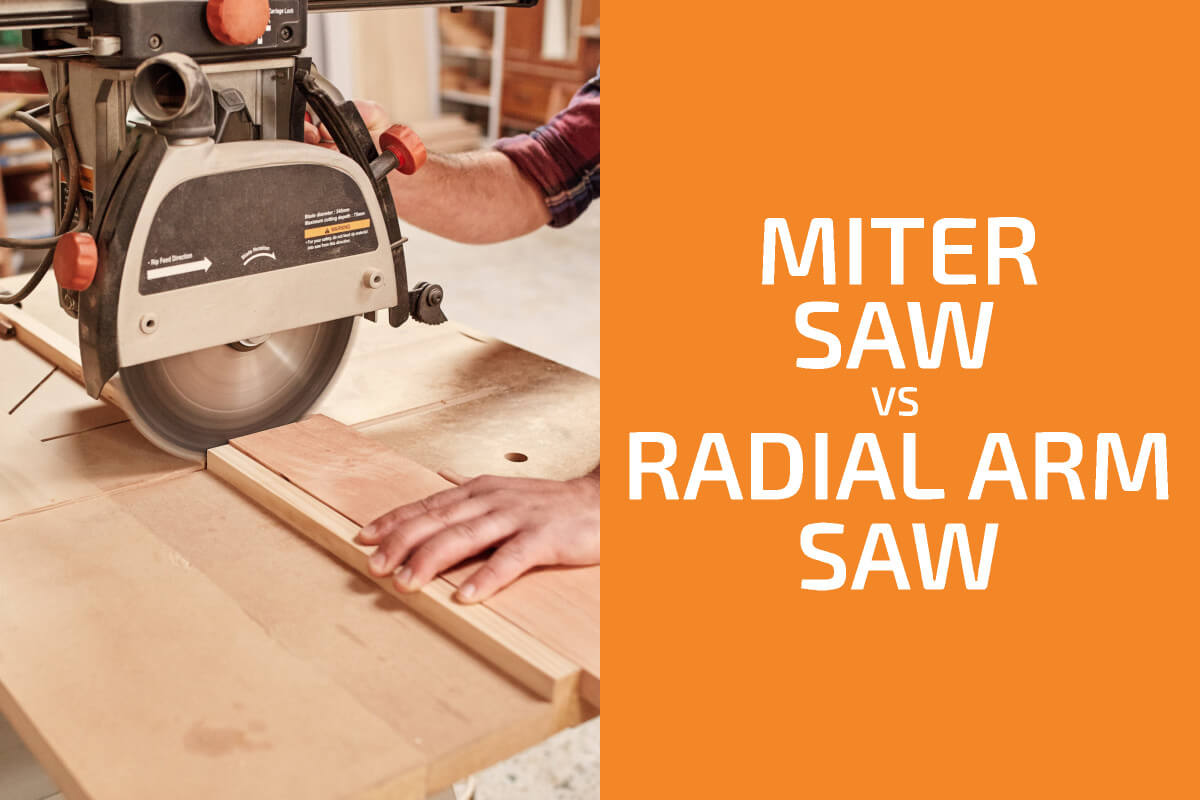 Having the right saw in an industry where you use materials like wood or metal is important in making sure you get the finished product you’re looking for. It may not seem this way, but any experienced crafter or DIYer will tell you these similar saws have big differences.

This guide will go through the differences between, specifically, a miter saw and a radial arm saw and the situations where one or the other is the most useful.

Before jumping into the differences, let’s start by taking a look at what each of the tools is.

A miter saw is a stationary power tool that uses a circular blade for quick and accurate cross-cuts and, unlike most other circular saws, it allows for greater precision and control through its hinged arm.

You can use a miter saw to make cuts for picture frames, door frames, window casings, and plenty more. They come in three main different types and these include:

What Is a Radial Arm Saw?

A radial arm saw’s most defining feature is its long arm that is used to slide the blade back and forth. It is more of a bulky machine and is typically kept stationary in dedicated woodworking shops.

Much like the miter saw, the radial arm saw also has a circular blade that can power through a variety of wood stock to make a variety of cuts including cross-cuts, miters and bevels, dadoes, rabbets, and rip cuts.

Miter Saw vs. Radial Arm Saw: What Are the Differences?

With the basics out of the way, let’s jump into the main differences between the two types of saws.

Radial arm saws have a higher cutting depth allowing them to cut through thicker materials.

Miter saws, on the other hand, are not made for cutting really thick wood. This has to do with miter saws typically having a smaller blade (generally 10 or 12 inches in diameter), and are made for adaptability rather than just raw power.

Radial arm saws also have a higher power output than their counterparts, and if you need to get a larger project done, you will need that extra power to get through tough materials.

The miter saw is widely considered to be a great saw for beginner woodworkers, while the radial arm saw is the exact opposite.

The radial arm saw does not have the same kind of safety features that its counterpart does. It is also bulkier, which can wear on your arms after continued use.

If you are thinking about using a radial arm saw it is especially important you know what you’re doing. You could not only damage your workspace but hurt yourself as well if you’re not careful. 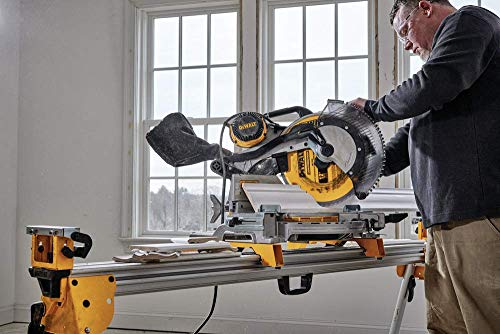 Radial arm saws usually are set in one space and stay there. They are heavier, and their long arm makes it an awkward carry when moving it to its proper spot. Also, they typically require a large base, so you really have to have the right kind of workshop to keep one around.

Finally, let’s take a look at when you should use each of the two types of saws.

When to Use Miter Saws

If you are just starting out with woodcutting or plan to stick to smaller projects, you should only need a miter saw to get your project done. These saws are safer as well, so if you aren’t very confident in your ability to operate these kinds of tools, this is a great tool to gain experience with. You can read my guide on how to use this type of saw here.

Also if you can afford to spend a little time chopping your wood and don’t need specific cuts, the miter saw is a great tool to add to your arsenal. Its cuts are quick and precise, which makes it a more efficient choice.

In general, the miter saw will work just fine for most projects. While it is less powerful than a radial arm saw, it is much cheaper and can cut through plenty of thick materials that can be used for many different kinds of woodworking projects.

When to Use Radial Arm Saws

If you’re working on a project that calls for the ability to cut thick or multiple boards while having advanced shaping flexibility, the radial arm saw is a better option.

This type of saw is also better if you’re looking to make a variety of different cuts. The miter saw has the capability to make different cuts as well, but the different design of the radial arm allows it to be a bit more versatile in this regard.

Remember, though, that radial arm saws should only be used by those confident in their skills with these power tools. If your project requires this type of saw but you don’t have much experience using them, take a class, and make sure you keep in mind their safety recommendations while using them.

Now that you have the knowledge, hopefully, you can find the right saw for your next woodworking project. The miter and radial arm saws may be similar, but they certainly have their unique applications and are made for different types of woodworkers.

For the most part, the miter saw is the recommended saw to keep around in your workspace but for some projects, it is a proper investment to get a radial arm saw.

Always remember to keep in mind the safety precautions for both kinds of saws, and best of luck on all your future DIY projects while using these tools.

How Do Miter and Radial Arm Saws Compare with Other Tools?