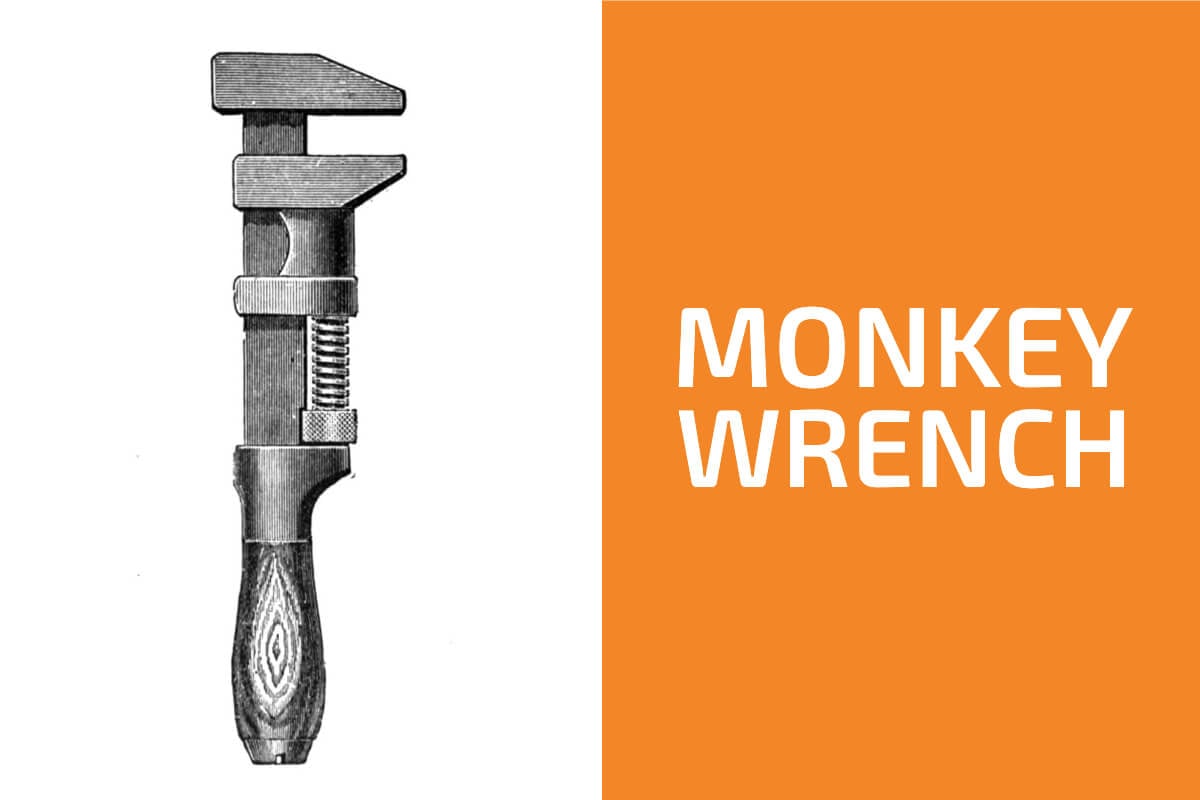 If you are interested in home improvement and tools, chances are you have heard about the monkey wrench. Chances are also that you have wondered why it’s called that even though it looks nothing like a monkey.

In this article, we’ll look at the origins of the term “monkey wrench,” as well as at who its inventor was. First, however, we’ll start with the basics – with looking at what kind of a tool it actually is and what it’s used for.

What Is a Monkey Wrench and What Is It Used For?

Let’s start with the dictionary definition of the term monkey wrench. According to the Merriam-Webster dictionary, it’s:

Of course, in this article, we’re talking about the first – literal – definition of monkey wrench rather than its metaphorical meaning.

The monkey wrench, unlike a standard wrench of a fixed size, can be adapted to grip nuts of various sizes by spinning the screw which moves the bottom jaw back and forth. While it wasn’t the very first type of an adjustable wrench, it was the first one that could conveniently be operated with a single hand.

It was a popular tool among handymen in the 1800s and 1900s who liked the fact that rather than having to have a set of heavy wrenches of various fixed sizes they could have just one wrench that could be used with nuts of multiple sizes. Since then, however, the monkey wrench has lost popularity as the lighter and smaller adjustable spanner became the go-to tool for that purpose.

That said, monkey wrenches are still sometimes used for heavier work where a compact adjustable spanner is too small.

Who Invented the Monkey Wrench?

As you will find out later in this article, there are a couple of different stories about the origin of the term monkey wrench. In fact, it seems that the term might have even been coined before the tool that we know today as the monkey wrench was invented. That makes it a bit difficult to be certain about the person that invented the tool.

The tool, which he called the “screw wrench,” was granted a patent on April 16, 1841. It was then manufactured by L. & A. G. Coes, a company that Loring operated together with his brother Aury Gates Coes.

How Did the Monkey Wrench Get Its Name?

Assuming the above is true, that still does not explain where the tool got the name its the most recognized by. After all, the Coes brothers didn’t call it the monkey wrench but the screw wrench.

As for the origins of the term “monkey wrench,” there are two theories that spread widely, both of which have proven to be false. The third theory – that simply looks at the meaning of the word “monkey” – is likely the correct one.

The first widely-circulated-but-false theory is that the word “monkey” in monkey wrench is used as a derogatory term for Jack Johnson, the first African American world heavyweight boxing champion and the alleged inventor of the wrench.

If you have read this article carefully, then you will know that this theory can’t be true. If for nothing else then because the monkey wrench was not invented by Jack Johnson.

Interestingly, though, Jack Johnson did actually patent his version of an adjustable wrench back in 1922. You can see the patent here.

The second widely-circulated-but-false theory is that the “monkey” refers to another alleged inventor of the tool, Charles Moncky. While it is easy to see how the tool would get its name if the inventor actually was Charles Moncky, by this point you should know that the tool wasn’t invented by him.

When you ask someone what “monkey” means, the answers will – of course – almost exclusively relate to the animal. However, some dictionaries also add the following definition of “monkey:” a small light structure or piece of equipment contrived to suit an immediate purpose.

Now, if you think about what a monkey wrench is, it is basically a wrench that can be easily adjusted at any given time to fit the immediate purpose – to fit the size of the nut that its user needs to tighten or loosen.

Related to this, some sources also claim that the term is used because the tool is easy to “toy with” like a monkey.

Even though the monkey wrench is used nowhere near as much as it was fifty or a hundred years ago, it’s a tool that many people readily recognize. It’s also an important tool that paved the way to the invention of the adjustable spanner that is a staple in the toolboxes of almost all handymen around the world.

Unfortunately, however, there seems to be no consensus on who actually invented this versatile tool or how the tool got its name.

The only things that are certain are that most people seem to agree that it was Loring Coes, and that the theories about either Jack Johnson or Charles Moncky being the inventor – and the origin of the tool’s name – are false.

Instead, it is the most likely that the “monkey” in the wrench either comes from a lesser known meaning of the word or from the fact that “the tool can be toyed with like a monkey.”