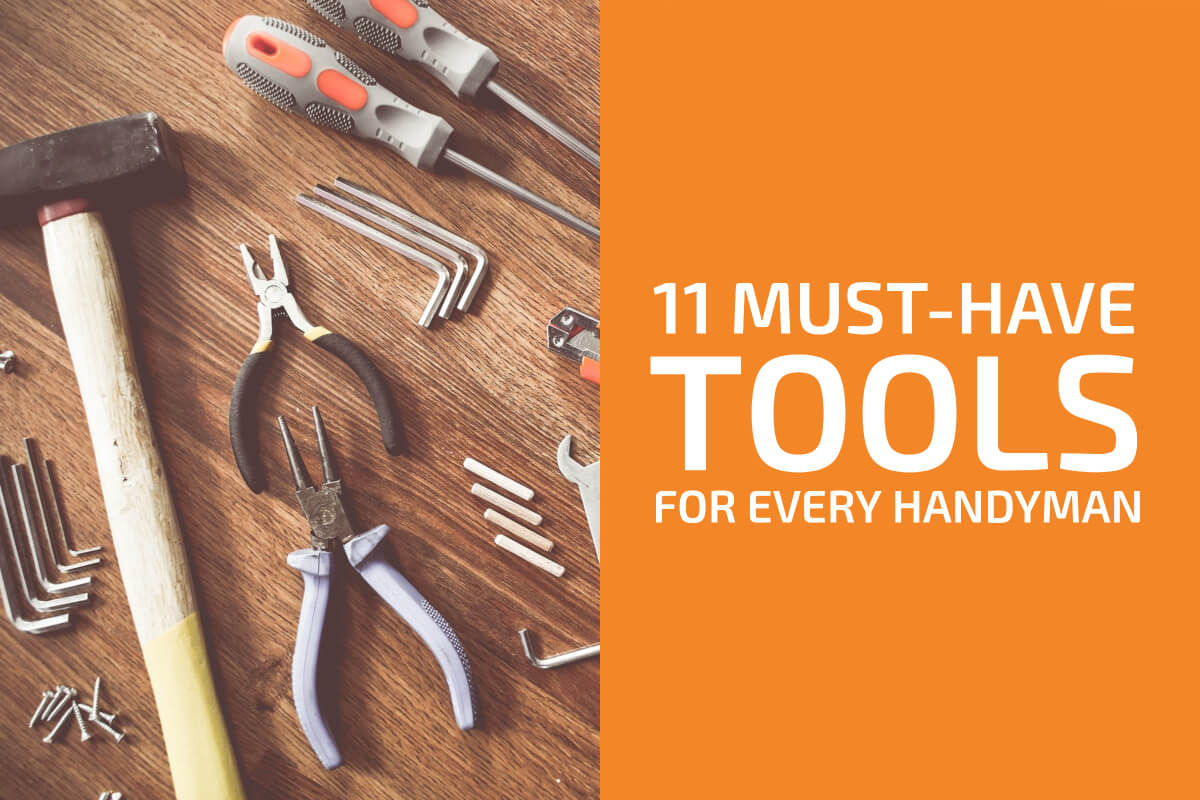 Whether you are someone that likes to fix or build stuff in and around your house or a professional handyman, it goes without saying that not having the right tools at your disposal can make whatever job you need to do exponentially more difficult.

After all, oftentimes “choosing the right tool for the right job” is the most crucial step in a project. While you cannot be expected to have every single tool on the planet in your toolbox, there are quite a few tools that you should get if you consider yourself a handyman.

Below, I’ll take a look at the must-have tools – both manual and power – that you should consider getting if you don’t own them yet.

Before jumping into the list, I want to note one thing. You will, of course, not need to have all of the tools listed below if you are only doing a DIY project here and there. The list should serve as a good starting point that you can adjust to your actual needs, though.

Alternatively, you can get a small toolset that will have most of the tools you will need by default.

As much as you should consider getting at least a power tool or two (more about that below), manual tools like screwdrivers and saws are the foundation of a handyman’s toolkit.

They are not only quicker to use for smaller jobs as they don’t need to be setup, charged, and so on, but they are also much cheaper than their power counterparts.

Working with screws, bolts, and similar fasteners will be one of the most common “handyman tasks” you’ll be doing – so it’s essential to have quality tools for that (unless you want to struggle with using screws without a screwdriver…).

The screws you will encounter most commonly will either have slot (-) or Phillips (+) screw drives of varying sizes. As such, you will want to own a good set of “standard” screwdrivers. Chances are they will come in handy more often than any other item on this list.

While there are sets with more than two dozen screwdrivers, in most cases, you will be just fine getting one with six or seven. You could, for example, get the Channellock SD-7CB seven-piece magnetic screwdriver set.

In addition to regular screwdrivers, you will also want to own a set of Allen keys (like this one by Bondhus). They will allow you to tighten and loosen bolts and screws with hexagonal drives like those that furniture often uses.

No matter what kind of job you will be working on, there will likely be something you will need to measure. Whether that means measuring the dimensions of a piece of furniture or the length of a bolt, or marking, or figuring out where to cut a board.

Regardless of whether you are in the United States or elsewhere in the world, I would recommend getting one with both imperial and metric scales. That will save you the hassle of having to convert units regardless of what the instructions you are working based on use.

Tape measures come in a variety of lengths, but to be on the safe side (i.e. to avoid having a tape measure that’s too short for the task you need to do), consider getting one that’s at least 25 feet long, such as this one by MulWark.

There are quite a few types of hammers, but if you are only planning on getting only one, then get a claw hammer – a hammer that has a “claw” used for pulling nails out of wood on one side of its head.

While it’s mainly meant for woodworking, more specifically for driving nails into wood, you can also use it for other light hammering.

They come either with a wooden handle or a metal handle covered with rubber. I recommend the latter type of claw hammer, such as the pictured Estwing one.

Together with a set of screwdrivers, a utility knife is a tool that every household should have – regardless of whether or not a handyman resides there. As its other name – “box cutter” – suggests, the tool will come in handy for opening boxes of all types.

If will also be useful when you need to strip a cable of its coating, or cut fabric, styrofoam, or fairly thin plastic.

There are many cheap utility knives that you can get at hardware stores or even an office supplies or grocery store. However, rather than buying a number of cheap plastic utility knives, you are better off getting a nice sturdy metal one that will last.

Whether you are installing a shelf or hanging a frame with a photo of your loved ones, nothing says “sloppy job” more than an unlevel installation. As such, you will want to have tools that help you with making sure things are at the angles they are supposed to be at.

One of the most basic tools to do that is a level. While for depending on the type of job, you might need a laser level or a plumb, most commonly you will do just fine with a spirit level.

This type of level can measure whether things are “perfectly” horizontal, vertical, or (sometimes) at a 45-degree angle. Depending on the job you might need one of different length, and so I recommend getting a set like this one from Workman.

While – unless you like to tinker with your car or use a lot of large screws and bolts – you will use these nowhere near as often as screwdrivers, it’s still good to have a socket wrench set at home (and definitely if you are a professional handyman).

Keep in mind that like measure tapes and many other tools, they come both in imperial as well as metric sizes. That said if you are located in the United States, having inch-sized sockets should be sufficient.

You can buy the different sizes of sockets, as well as the ratchet itself separately. However, to avoid yourself the hassle – and not to get into the situation where you have five different sockets none of which fits – just get one of the many sets available, like the pictured DeWalt one.

No matter if you need to hold a spinning bolt or bend a piece of metal, pliers can oftentimes help you with that. In fact, they are some of the most versatile manual tools out there. As such, they shouldn’t be missing from your collection.

And so, unless you want to buy a set, I recommend getting a good pair of multi-functional pliers like these by Goldblatt.

All of the tools above will be useless if you can’t reach the “workplace.” As such, you will also want to have a ladder. If you live in a house and do a lot of work outdoors, you will likely want a fairly tall one. However, if you live in an apartment or do most of your work indoors, a smaller one that will help you reach the ceiling will be sufficient.

You will, of course, find the ladder useful when you need to change a lightbulb of one of your ceiling lights, hang a frame fairly high on the wall, or attach Christmas lights to your roof.

There are dozens of different power tools, however, the ones that you need will highly depend on your situation. For example, if you have a garden you will likely need a weed wacker and if you use a lot of screws you might want a nail gun.

That said, there are two tools that you should definitely consider getting – especially the first of those.

If you ever tried to tighten more than a couple of screws or bolts manually, you know how tedious and tiring it can get. To avoid having to do that again, get an impact driver – a tool that you can attach drill, socket, and slot/Phillips bits to.

You will not be able to use it to drill into concrete walls, but it will be useful for drilling into wood and even metal. And, of course, you will be able to tighten screws and bolts easily, without much physical effort. With additional attachments, you will also be able to use it for many other tasks than making holes and tightening screws.

Some impact drivers are more powerful than others, and their power is denoted in volts. I recommend getting an 18V one with a set of bits. Personally, I use Makita and can only recommend their 18V impact driver with a 50-piece set of bits.

If you only ever drill into wood (or metal), you will do just fine with having only an impact driver. However, if you want to be drilling into concrete, bricks, and so on, you should consider getting a stronger hammer drill. While they come both with and without a cord, the cordless ones are quite pricey.

As such, unless you are a professional or don’t mind the steep price, get a corded one.

Unless you plan to do demolition work (breaking apart large chunks of concrete, etc.), you will not need a large hammer drill. Instead, a smaller one – like the DeWalt DWE5010 – will be a nice addition to your toolbox.

One last power tool I am going to mention in this list is a jigsaw. You will not need this unless you need to cut wooden boards or similar. However, if you do need to do so, then it is a lifesaver compared to having to do the cutting manually.

You can, of course, use it for simple straight cuts. But, it is versatile, and can also be used for angled cuts or even for cutting out simple shapes (if you want to make some wooden toys for your kids, for example).

There are countless entry-level jigsaws in the market, and so it shouldn’t be difficult to pick one that you like. Personally, I would suggest this one by Black & Decker which is very affordable and will work well in most situations.

There are countless different tools – both manual and power – that can make a handyman’s job easier. And, the matter of fact is that no matter how many and what tools you have, there will always be some other tool that you will want.

That said, there are some tools that should absolutely not be missing from any handyman’s – or more generally any household’s – toolbox. Those include a good screwdriver set, a tape measure, a claw hammer, a utility knife, and a ladder. If you also work with screws and other smaller pieces a lot, you might consider something like Grypmat.

If you tend to do a lot of DIY work – which you likely are if you came to this page – then an impact driver (such as this 18V Makita one) is an absolute must-have as well.