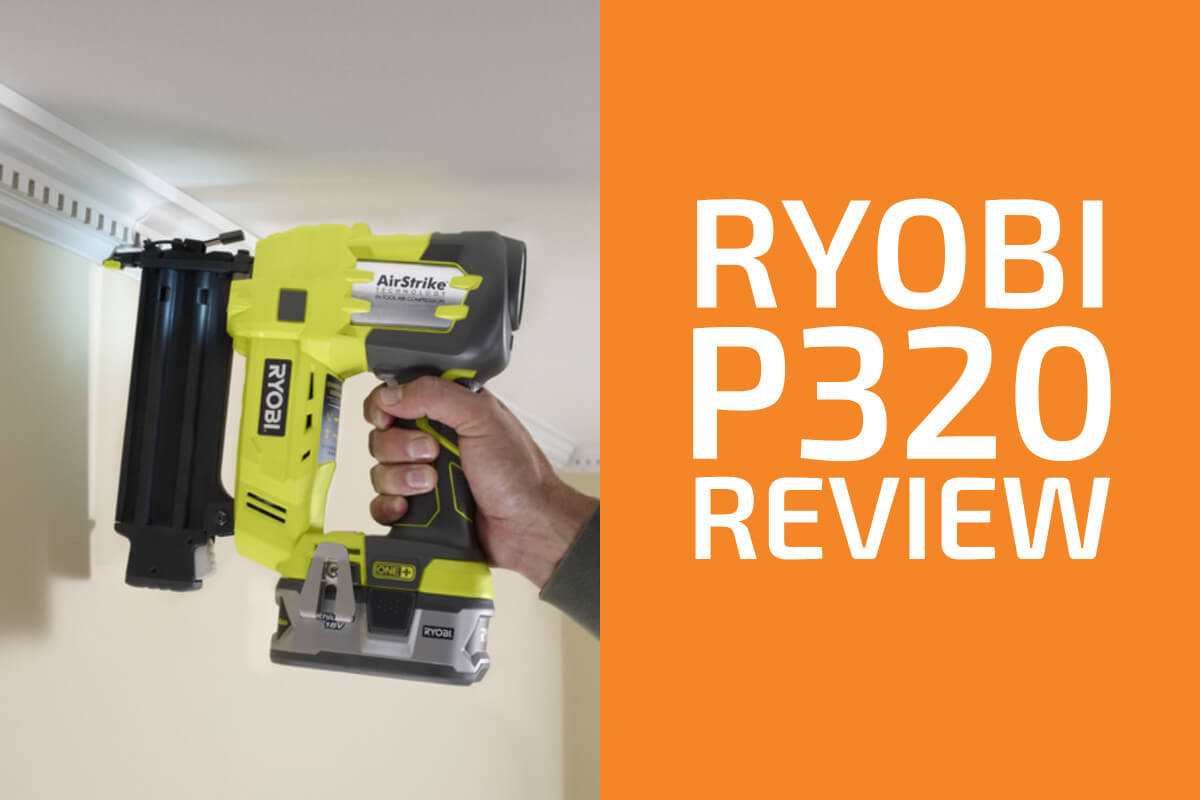 If most of your projects involve crown molding or having to hold your nailer in an awkward position, you’ll need a lightweight yet powerful tool – and the Ryobi P320 Airstrike Cordless Brad Nailer is a great candidate for just that.

With that said, what’s to like about the Ryobi P320 Airstrike Cordless Brad Nailer? What are its features, specs, pros, and cons? Is it the brad nailer for you? Don’t worry – I’ve got you covered with a detailed review below to help you decide whether this tool is right for you.

An affordable cordless brad nailer kit that drives a lot of nails per charge and sports good usability features. Great for beginners, casual users, and those on a budget.
Check today’s price on Amazon

This cordless brad nailer is best used for tough jobs that require you to lift the tool for long hours. Since it has a decent weight plus a couple of convenient tool-less features, your DIY job will be completed before you know it, and without the frustration.

This brad nailer is capable of driving up to 1,700 nails on a single charge (with the use of a P108 4.0 Ah LITHIUM+ battery), and can handle 18-gauge nails from 5/8 to 2 inches. Its magazine capacity is 105, which is slightly more than the average 100-nail capacity of most brands.

The tool only weighs 5 pounds (without the battery), making it one of the lightest in its class when compared to most cordless brad nailers out there.

Ryobi backs their tool with a 3-year limited warranty. With that said, to uphold its quality, it’s built with a patented AirStrike technology, which allows the tool to deliver a similar kind of power that’s much like using a pneumatic brad nailer.

There’s a lot to say about the usability of the Ryobi P320. For instance, since it uses 18V ONE+ batteries, if you have any Ryobi tools that use the same battery, it’s just a matter of interchanging them. Switching between sequential or contact actuation allows you to have more flexibility with delicate DIY tasks.

Aside from that, the drive depth adjustment requires no tools, which can save you time and effort. Simply use the adjustment dial to find your ideal pressure, to avoid breaking your material with the nailer. Moreover, it has a belt hook that allows you to mount your brad nailer on either side for added convenience.

As with most cordless brad nailers, it has an LED light that will illuminate your work area. It also only turns on when you grip the tool handle, so it won’t be running when you don’t need it (which also saves battery life).

Likewise, it has a tool-less jam release, plus a low-nail indicator to avoid downtime and dry firing. To protect your surface from unsightly marks, it also has two non-marring pads.

Should You Buy the Ryobi P320 Airstrike Cordless Brad Nailer?

I think that the Ryobi P320 will appeal to you if you often find yourself working in odd or awkward positions when using your brad nailer. For instance, home projects such as crown molding, trim installation, and the like are among its best applications.

If you are still unsure about the decision, go through the below list of the pros and cons of the tool.

It has a built-in LED light.

Having a built-in LED light is always useful. For instance, you need to fire the brad nailer in a dimly-lit ceiling when you’re installing crown molding – that’s when lights definitely come in handy!

The unit is lightweight.

At only 5 pounds, you won’t feel worn out from using the tool, even if you add the battery. This is useful for handling crown molding projects or any kind of DIY work at home that requires an upright or awkward position.

However, if you were previously using a pneumatic tool and you want to switch to a cordless brad nailer, it’s normal to feel that the tool seems too heavy for you – that’s the same with all other cordless brad nailers since they have to carry a battery around.

It has a tool-less jam release.

You don’t need an Allen wrench or any external tool to get a jammed nail out – this cordless brad nailer saves you the trouble with its tool-less jam release.

With that said, for the tool-less jam release to work properly, you may want to add oil to the feed and punch. This not only makes it easier for you to pull out jammed nails but also reduces the likelihood of jamming – even if you were using low-quality 18-gauge nails.

There’s a low-nail indicator on the tool.

Shooting the brad nailer without any nail will cause dry firing, which will mar your material, and leave unpleasant marks. To avoid dry firing, having a low-nail indicator on the tool saves you all the trouble so you can reload the magazine when necessary.

Even though the Ryobi P320 is a great tool, there are a few cons worth noting as well.

You have to buy the battery separately.

Since this is a bare tool only, you have to look elsewhere for the battery (P108). With that said, if you’re the type of worker who already has many Ryobi tools, which includes that battery model, this won’t be a con for you.

When you use the tool for the first time, you might encounter slight difficulty when firing the first few nails. This is only temporary, as the brad nailer will get better after the first cycle of magazines and battery recharge.

What Are the Alternatives to the Ryobi P320? 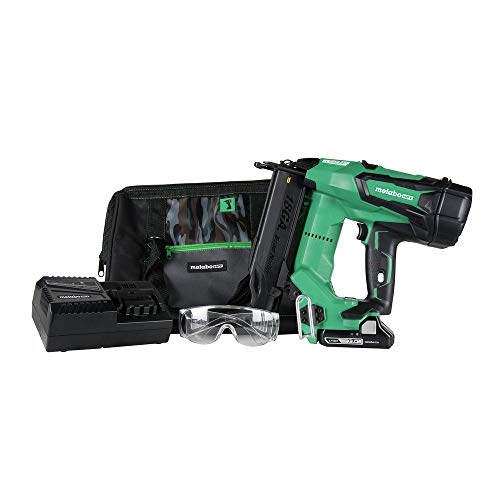 If you aren’t that satisfied with the features of the Ryobi P320, don’t worry – I have other similar picks to meet your needs:

The Metabo HPT NT1850DES Cordless Brad Nailer Kit will fire up to 1,650 nails per single charge, which is almost as good as my main Ryobi pick. It also allows you to switch between sequential and rapid/contact actuation mode for flexibility on your DIY job. Similar to the Ryobi brad nailer, it also has a tool-less drive depth adjustment for added convenience.

Ryobi’s AirStrike technology is also similar to Metabo’s Air Spring Drive system, which gives you power similar to that of a pneumatic tool but in a cordless unit (which doesn’t require an air compressor). This brad nailer is also built with a cool-running brushless motor.

A similar point is that the Metabo’s lithium-ion battery has a lightweight and slim design, reducing the load on the tool, and decreasing user fatigue.

Another lightweight option that you might like is the DeWalt DCN680D1 20V MAX Cordless Brad Nailer Kit (read my review), which weighs only 5.3 pounds minus the battery. It also features great user-friendly tool-less mechanisms, such as a stall release lever and a jam release mechanism. Likewise, it has an adjustable belt hook for either left or right mounting.

However, a difference between this tool and the Ryobi brad nailer is the low nail knockout, which thoroughly prevents dry firing. Although the Ryobi P320 has a low-nail indicator, it only alerts you to load up your magazine but does not necessarily keep you from firing dry nails.

Yet another lightweight and comfortable brad nailer to consider is the Craftsman CMCN618C1 V20 Cordless Brad Nailer Kit, which also weighs 5.3 pounds, has an over mold, and has an optimal center of gravity to help reduce user fatigue. The similarity of this tool and the Ryobi P320 is the tool-less nail jam and stall release feature.

The only small consideration you need to look out for is that it doesn’t have a lot of firing power – it only fires up to 420 nails per single charge with a 100-nail magazine. With that said, since this is a kit, it comes with a battery and charger for you to get started.

As a whole, the Ryobi P320 is generally a good cordless brad nailer to consider if you’re mostly working on crown molding, or any project that requires long hours of standing up and holding the tool upwards in an arm-tiring position.

While it’s only a bare tool and it may run into slight problems for firing the first few nails, overall, it’s still a convenient and powerful brad nailer with solid convenience features, such as the built-in LED light, tool-less jam release, and low-nail indicator.

An affordable cordless brad nailer kit that drives a lot of nails per charge and sports good usability features. Great for beginners, casual users, and those on a budget.
Check today’s price on Amazon