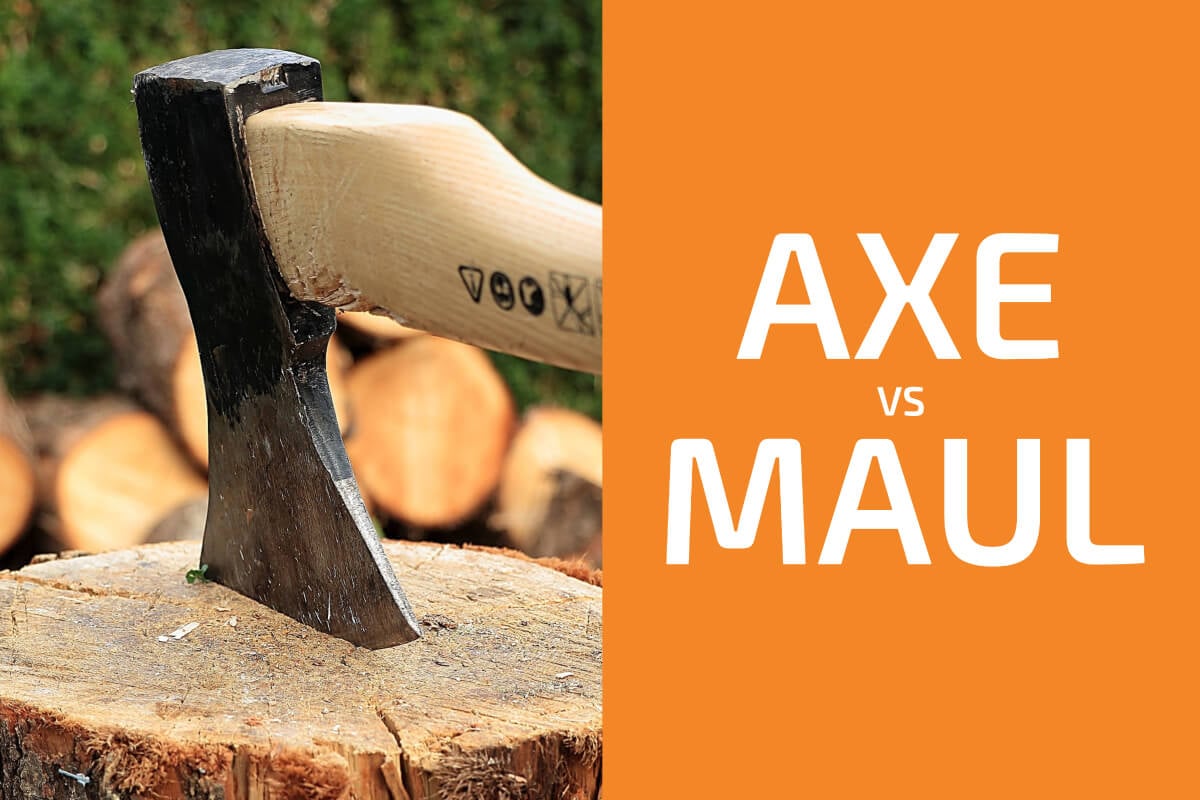 The easiest way to split logs into firewood is to use a gas or electric log splitter. However, because the machines cost hundreds and even thousands of dollars, they are prohibitively expensive for most users. Instead, most people have to do the work manually.

As far as manual tools for splitting wood are concerned, the two most common ones are an axe and a maul. In fact, amateurs often use the terms interchangeably – or rather, they often refer to mauls as axes.

I wrote this article to help you avoid doing so, to learn what the differences between the two are, and to help you figure out which one of the two you should get.

Splitting Axes and Mauls: What Are They?

Before looking at the differences between the two tools, let’s start by defining what they are. As you already know, both of them are tools designed for splitting wood.

A splitting axe is a tool with a tapered metal head installed at the end of a handle (there are some axes that are just a single piece of molded metal as well). In other words, its head gets thinner and thinner, and at the very end is sharp.

Splitting axes, unlike “normal” axes, are designed to split a piece of wood along its grains rather than cut across a log.

A splitting maul, similarly to an ax, is a tool with a metal head installed at the end of a handle. Just like an axe head, a maul head gets thinner towards its end. Unlike the head of an ax, though, it’s blunt at its very end.

To give you an example of each, below is a table with what I consider to be the best splitting axe and the best maul to get.

A small splitting axe with a traditional look. Available in a variety of sizes.

A high-quality splitting maul. Made in Sweden by one of the best-known axe and maul manufacturers.

What Are the Differences Between a Splitting Axe and a Maul?

Now that you roughly know what each of the tools is like, let’s take a more detailed look at the differences between them.

The biggest difference between a splitting axe and a maul, as already indicated earlier, is in the design of their heads. Not only does an axe have a sharp blade as compared to the blunt head of a maul, but an axe head is generally thinner than a maul head.

Firstly, as already mentioned in the previous section, an axe has a sharp head while a maul has a blunt head. Generally, axes are also thinner overall compared to mauls. And, an axe usually weighs up to 6 pounds while a maul is heavier, often weighing up to 8 pounds.

Second, handles of mauls are generally longer than those of axes. That allows the person using it stand further from the log and the head of the maul to hit the dirt under the log after splitting it rather than your body. As such, for “heavy duty” splitting, it is safer than an axe (assuming you are proficient in using it, of course).

Finally, while axes generally come either with a wooden or a composite handle, mauls are often available with fiberglass handles as well.

Splitting Axe vs. Maul: Which Is Better?

So now that you know what the two tools are and how they are different from each other, it’s time to answer the biggest question. Should you be getting yourself a splitting axe or a maul?

The answer is (as with everything) it depends.

If you are planning to split a large number of fairly big logs, then you should definitely get a maul. That is unless you are able to afford a power log splitter.

While you might find it a bit more difficult to use in the beginning due to the fact that it’s quite heavy, once you learn how to use it properly, you will save time by being able to split many logs in just a single swing.

On the other hand, if you only need to split the occasional tool, then consider getting a splitting axe. Because it’s sharp edge allows chopping in addition to splitting, it’s a more versatile tool. It’s also lighter, and so you will not need as much strength to use it as you would with a maul.

That said, the sharp blade of an axe has its drawbacks too. While it will cut the wood easier, it will also get stuck in the middle of a log easily. And so, you might end up spending a lot of energy – both physical and mental – on trying to get the axe out of the log so that you can continue splitting it.

Regardless of what you need to be splitting logs for, unless you are doing it on a regular basis, you will most likely be looking into getting either a splitting axe or a maul.

They are both fairly similar to each other. However, there are also some significant differences between them. Most importantly, while an axe has a sharp blade at the end of its head, a maul has a blunt but heavier head.

If you will be splitting a lot of logs, then you will want to consider getting a maul (or even a power log splitter if you have the budget). Otherwise, you will likely be better of getting a splitting axe which will do the job just fine and is more versatile.