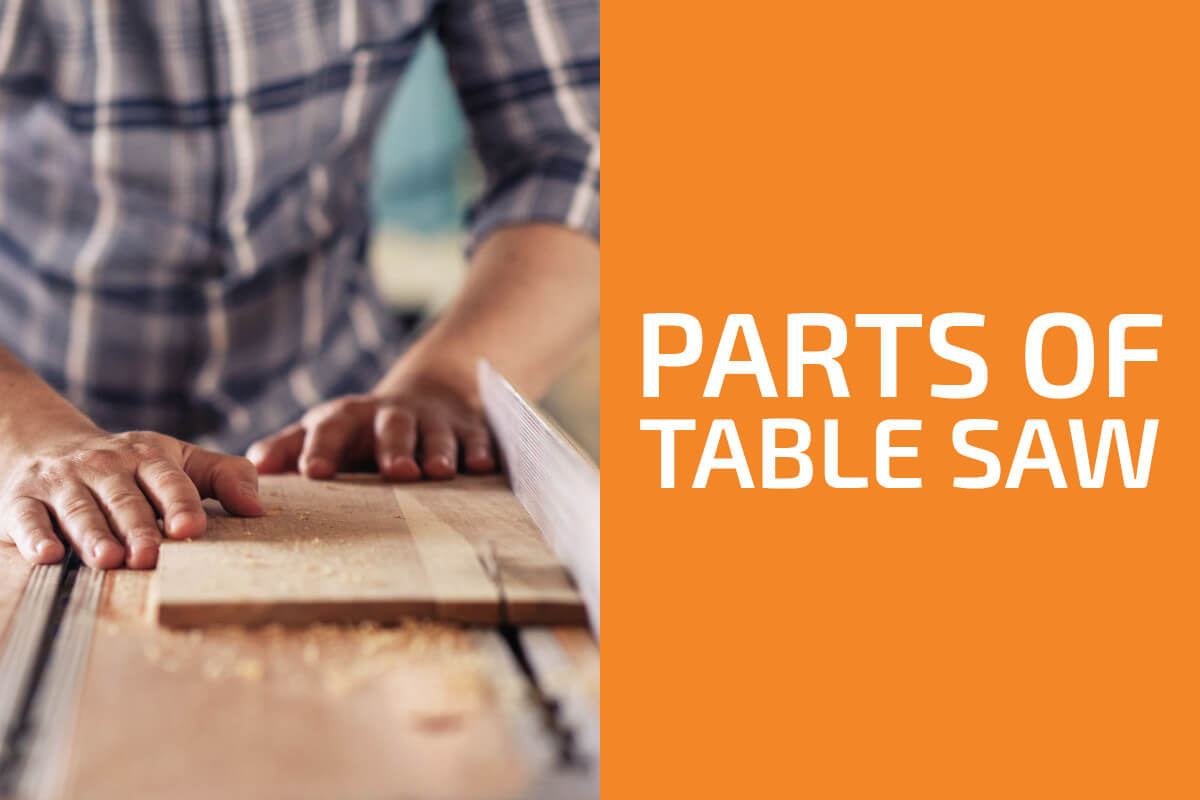 Table saws are of course some very useful tools in the world of woodworking and carpentry. They have the ability to make quick and accurate cuts of wood stock. All of that said, table saws are somewhat dangerous tools that require a good deal of skill and knowledge to operate.

While before, I talked about how to use a table saw, this article takes a look at the different components that the machine is made out of.

The first component of a table saw that is worth knowing, although it is optional, is the table saw stand. Some table saws come with a stand included.

Even if yours doesn’t, though, it is not a big deal as most table saws are compatible with many stands. This is convenient because it means you can easily set up the table saw anywhere as long as you have flat ground.

That said, table saws can also be mounted on a worktable or a workbench. So, the stand is not 100% necessary, but it can certainly come in quite handy if you need to use your table saw in various locations, as is the case if you are a professional that moves from one project to another. 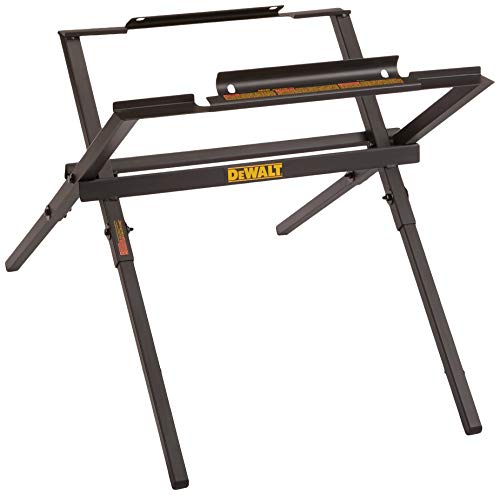 When buying a table saw, ensure that you go with a high-quality table surface, one that is 100% even, flat, and free of defects. Look for one that is resistant to scratching and damage, preferably one that is made of solid cast iron. You don’t want dents and scratches forming on the table surface, because this will result in decreased functionality and cutting precision.

One of the most important components of any table saw is of course the motor and the power transmission. Without a motor, the saw blade would not move at all. A table saw motor generally has between 3 HP and 6 HP, more than enough to power that blade through mostly any kind of wood, as well as other materials.

We aren’t going to get too technical here, because a motor by itself has many components, but one we do want to touch on is the transmission. Simply put, this is a system that connects the moving parts of the motor to the arbor, thus allowing the blade to spin. It transfers the power produced by the motor into the motion that the blade requires to function.

The next set of important components that you will find on every table saw is the arbor, the arbor nut, and the blade locking pin.

Having a high-quality arbor and related components is quite important because they determine how well you can secure the blade.

We are talking about table saws here, so of course, we cannot neglect to mention the table saw blade. Without that circular blade covered in razor-sharp teeth, you would not be able to saw through anything.

What kind of saw blade you need for your table saw is determined by the material being cut. One thing to look out for here is how many TPI or teeth per inch the saw blade has. Generally speaking, the more teeth a saw blade has per inch, and the smaller they are, the finer and smoother the end result. A low TPI count usually results in a faster but rougher cut.

Moreover, there are also various blades designed for cutting wood, PVC, plastic, tile, ceramics, masonry, and metals, with some saw blades being carbide-tipped or even diamond-tipped for added durability and sharpness. 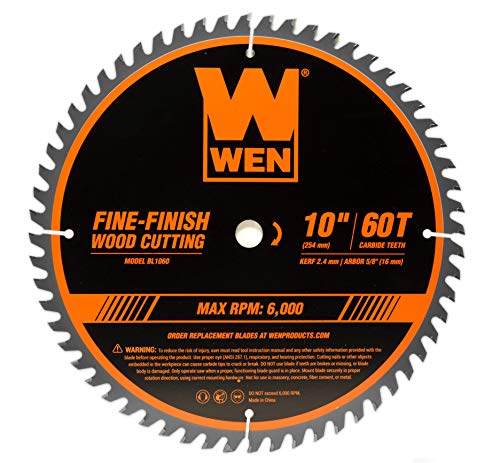 Every table saw out there comes with a blade guard. This is usually made out of plastic, like a hollow and rounded plate that fits neatly over the table saw blade.

The point of the blade guard is to ensure that the blade is not exposed when not in use. As such, it is an important safety feature. It also functions to only expose as much of the blade as is needed to make a certain cut. 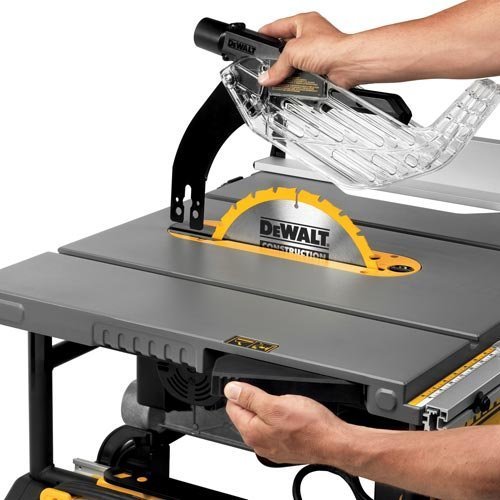 Yet another important component of a table saw when it comes to keeping you safe are the kickback pawls. Every good table saw should come with kickback pawls included, although not all do. A kickback pawl is like a little metal latch or a series of latches that look like two small saws linked together.

Kickback pawls are located on the far end of the saw, behind the blade, behind where the cut is made. The point of kickback pawls is to prevent the two pieces of wood (that used to be one piece). From raising up off the table surface after having passed through the blade.

When it comes to making accurate cuts, a good rip fence is always called for. The rip fence looks like a squared metal bar that usually sits to the right of the blade. This is mounted on a sliding rail that allows the fence to move closer and further from the blade, with precise adjustments usually being possible.

The function of this is to create an exact distance between the blade and a certain point, which in this case is the fence. This makes it much easier to make accurate cuts down to a fraction of an inch. It also allows for increased safety, because the rip fence helps stabilize and keep the wood in place as it is being cut. 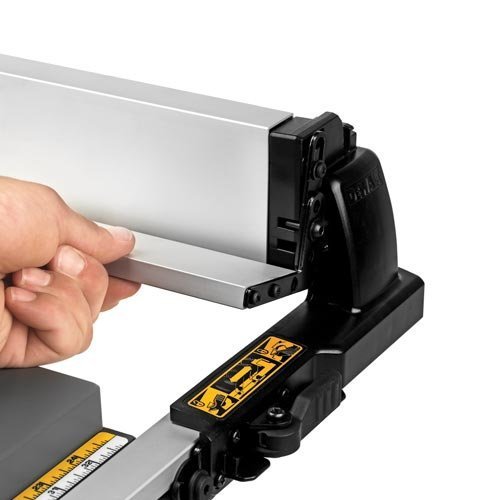 Another important component of a table saw when it comes to making accurate and precise cuts is the miter gauge. The miter gauge is similar to the fence in appearance, as it consists of a squared metal bar that can be adjusted for position, but it also includes a lever that allows it to rotate to a specific angle (sometimes in one direction and sometimes in both).

The function of the miter gauge is to allow you to turn the board being cut on an angle, thus allowing you to make cuts other than straight 90-degree cuts, which are commonly referred to as miter cuts. This is not something that you will find on every table saw, but the good ones should have it, as it is quite useful.

The final important component of any table saw is the dust shroud, a special component that rests over the blade and funnels sawdust away from the table surface, thus allowing for greater visibility and safety.

Dust shrouds can usually be connected to dust extraction vacuums to suck the sawdust away with great efficiency. 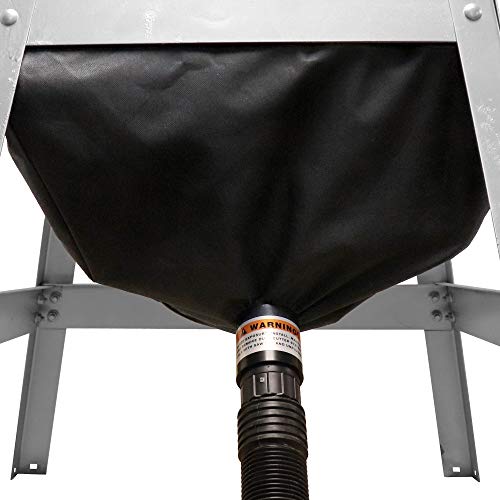 The bottom line here is that if you are familiar with these ten important components of a table saw, you are well on your way to becoming a table saw master! Moreover, now that you know what the components are and what they do, you should become much more proficient at both using and maintaining your table saw.