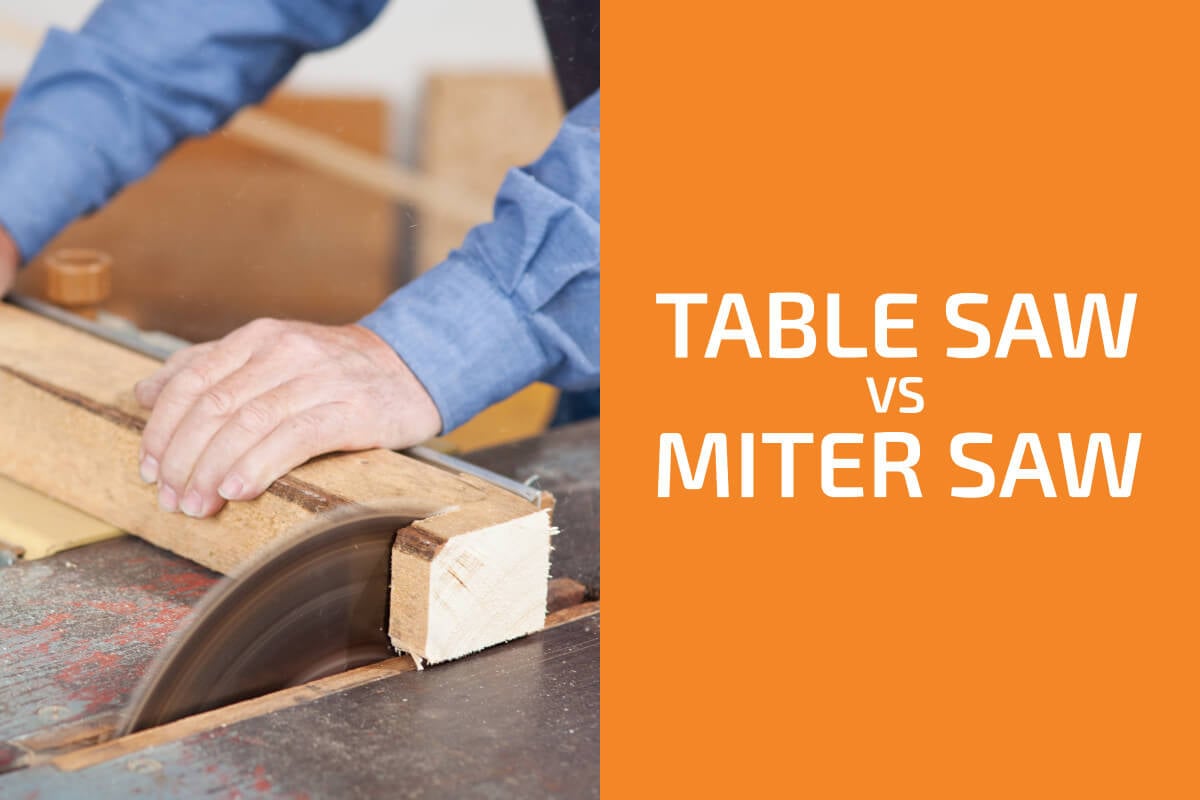 Power saws are a staple in the woodworking industry. They give DIYers the ability to finish large woodcutting projects in shorter times than ever before and come in all kinds of varieties.

Table saws and miter saws are two of the most common types of power saws that have become popular in amateur and professional workshops alike and if you want to improve your carpentry skills, you will want to learn the different uses for both of these.

Table and Miter Saws: The Basics

These two types of saws are used for fairly similar projects and materials, but you can tell just by looking, that these are two completely different tools. Before jumping into the differences, let’s start by taking a look at what each of the tools is. 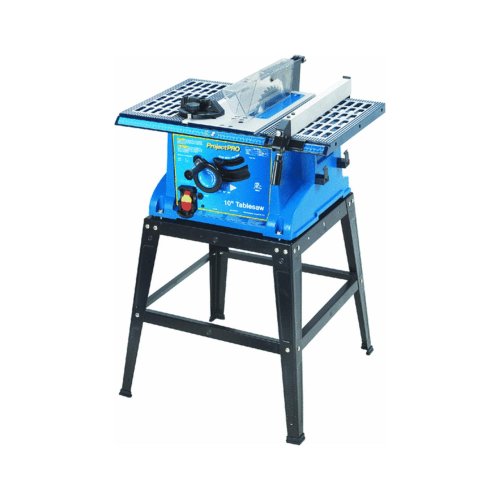 A table saw is a woodworking tool that uses a circular saw blade that is driven by an electric motor. The blade comes up through the top of a table, which is the base support for the material being cut.

The user controls and pushes the material forward, feeding it into a spinning saw blade in the center of the table to cut through it.

This is one of the oldest and most commonly seen power tools in woodshops.

A miter saw is another well-known power tool that lets you make cuts at a variety of angles into wood and some other materials. The saw has a blade mounted on a swing arm that pivots left or right to produce angled cuts.

You can use a miter saw to make cuts for smaller projects like picture frames, door frames, window casings, and plenty more.

Miter saws, in general, come in three different varieties that all have their niche uses but operate in a similar fashion. These different types are:

Table Saw vs. Miter Saw: What Are the Differences?

With the basics out of the way, let’s take a look at how exactly the table saw and the miter saw differ on a practical level.

The table saw is an excellent tool for cutting large pieces of wood because of its design in cutting the wood by feeding it through the saw by hand.

On the other hand, with a miter saw, the user places a strip of wood on a narrow base at the front of the saw, and then lowers the spinning blade to cut through the material from top to bottom typically.

Both of these saws use similar size blades but the more manually intensive design choice allows for larger cuts for the table saw.

A miter saw is known for being able to make the most difficult cutting angles fairly easy. The head of a miter saw can be swiveled from side to side to cut any degree angle necessary. Miter saws are a staple in the trim carpentry industry because of this ability to cut the complex angles necessary for installing things like trim and crown molding.

The table saw can cut these angles as well, but it is much more difficult because the user has to adjust their position rather than just the blade. They have to put the wood at the correct angle while holding it steady to feed it through the spinning blade and this is a technique that can grow tiring very quickly. 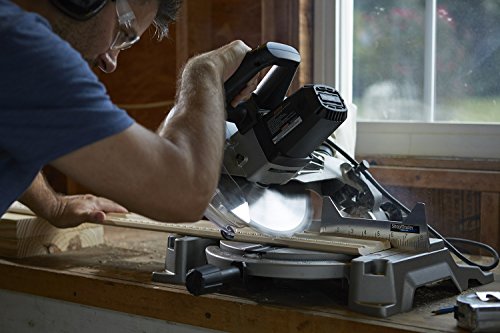 Since a miter saw is operated by lowering a spinning blade, it cannot make a cut that’s longer than the width of the blade, which is typically only 8 to 12 inches.

The only exception to this is a sliding arm miter saw, however, it is still limited to however long the arm is. You will have to lower the head of the saw multiple times to cut a longer piece of material.

A table saw, on the other hand, can cut any length of the board because the blade is stationary, and the wood is fed into the blade. The cut parts of the wood will simply fall away to the side as they’re being fed through.

Although some table saws come with wheeled stands, most table saws are considered stationary and are bolted to solid steel legs or built into a cabinet. Table saws can weigh up to 300 pounds, are unwieldy, and difficult to move using only one person.

Miter saws are essentially the opposite and weigh only in the 50- to 60-pound range. They are compact as well and easy to carry around, so you will have no trouble moving around a miter saw if needed.

If you’re looking to clear up some space in your workshop, the miter saw is a great way to do this. The table saw, with its larger base, is arguably the bulkiest of all the commonly used power saws.

Miter saws tend to be cheaper than table saws and start around $100 to $200 for a cheaper one you can find in most hardware stores. The most expensive ones can cost you close to $1000 on the other side.

Cheaper table saws will cost around $200 but as they grow in quality the price spikes a solid amount. The most expensive ones can be priced even at $2000 or more.

Price aside, the big difference is the availability. Miter saws can be found just about anywhere and are one of the most common types of power saw on the market today. Table saws are much rarer, and if you want a larger one it will be fairly difficult to find in a typical hardware store. 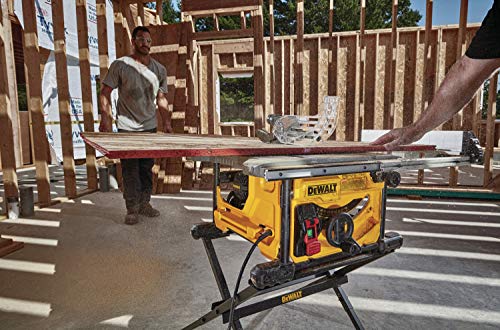 A miter saw is absolutely the more precise of the two. The material is held snugly against the back of a miter saw during the entire cut so it is almost never moving while the blade is going through it.

The table saw is the complete opposite of this, as the wood is constantly in motion. If the user so much as varies the pressure on the wood as it’s being pushed into the blade, it can cause slightly jagged areas on the cut edge of the board.

The slight imprecision that can occur on table saw cuts usually won’t affect large projects but can result in an amateurish look if installing trim or cuts that require more finesse.

All power tools can be dangerous, and manufacturer safety instructions should always be followed explicitly when using them. With this said, it is more common to see injuries occur using table saws.

Many table saw injuries are a result of kickback, which occurs when the blade catches on the wood and either pulls the user’s hand into the blade or throws the wood back in their face. Table saws are not recommended for beginners to use without taking a class or doing an apprenticeship under an experienced woodworker’s supervision.

Miter saws almost never get this knockback and are great tools for beginners to use. However, it is important to watch your hands when moving the blade from side to side, this is how many injuries happen when operating a miter saw.

Both types of saws talked about in this article are great for different types of projects.

If you’re doing smaller DIY woodcutting that requires more precise cuts, the miter saw is a great option that works well for many woodworkers. For those that have a bit more experience and are working on larger scale projects that need very long cuts in large pieces of wood, a table saw is perfect for the job.

Here are a few common projects many woodworkers wish they had the right saw for before they finished it.

Table vs. Miter Saw for Woodworking

The miter saw is the better saw for general woodworking like creating cabinets, furniture, and other small projects along the same lines.

Plus, the miter saw is perfect for easily making the angled cuts that most of these pieces need. Not to mention, these saws are great for beginners, and most will start out by doing these basic smaller projects using a miter saw as their first power saw.

Table vs. Miter Saw for Laminate and Wood Flooring

Using a table saw for laminate and wood flooring will be your best choice. These projects tend to use long cuts and, sometimes, fairly thick pieces of wood.

While it is certainly possible to use a miter saw for this, it would be much more efficient to use a table saw. You will only need one kind of cut and if you’re using thicker wood, you may even have to flip it over to cut through with a miter saw.

Table vs. Miter Saw for Decking

Once again, the miter saw will be your best choice for doing decking. However, you honestly could use either or ideally both for this kind of project.

For the most part, you will have to make long cuts for this task but the material for decking is often fairly thin so the miter saw should have no trouble dealing with these longer cuts.

Plus, for the railings a miter saw is best for the smaller cuts you’ll need to make. So if you had to pick one, go for the miter saw. Although, if possible go for both to complete this project as smoothly as possible. 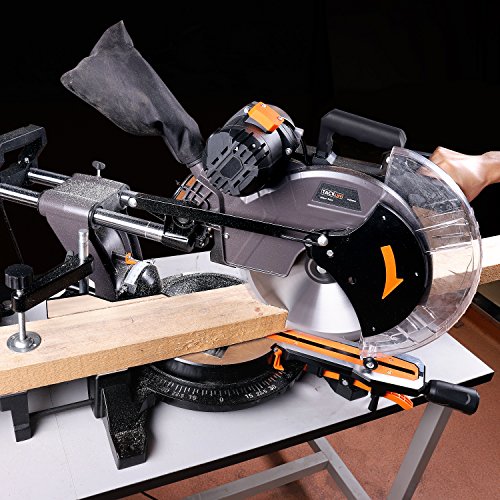 In the end, the best saw to choose depends on what project you want to get done. The miter saw is the generalist that is best for a variety of small tasks while the table saw is best used for larger housing projects that need some extra power.

In general, the miter saw I would say is the safer buy and can even be used for bigger projects with a little extra effort. I wrote about my favorite models here. Although, if you’re a confident woodcutter, you likely already know that adding a table saw to your workshop can be a great way to take your skills and efficiency to the next level.

Hopefully, after reading this, you now have the knowledge you need to choose the right saw for your project. Be sure to stay safe and practice as much as you can with both of these saws because hard, dedicated work will always show when you’re finished.

How Do Table and Miter Saws Compare with Other Tools?