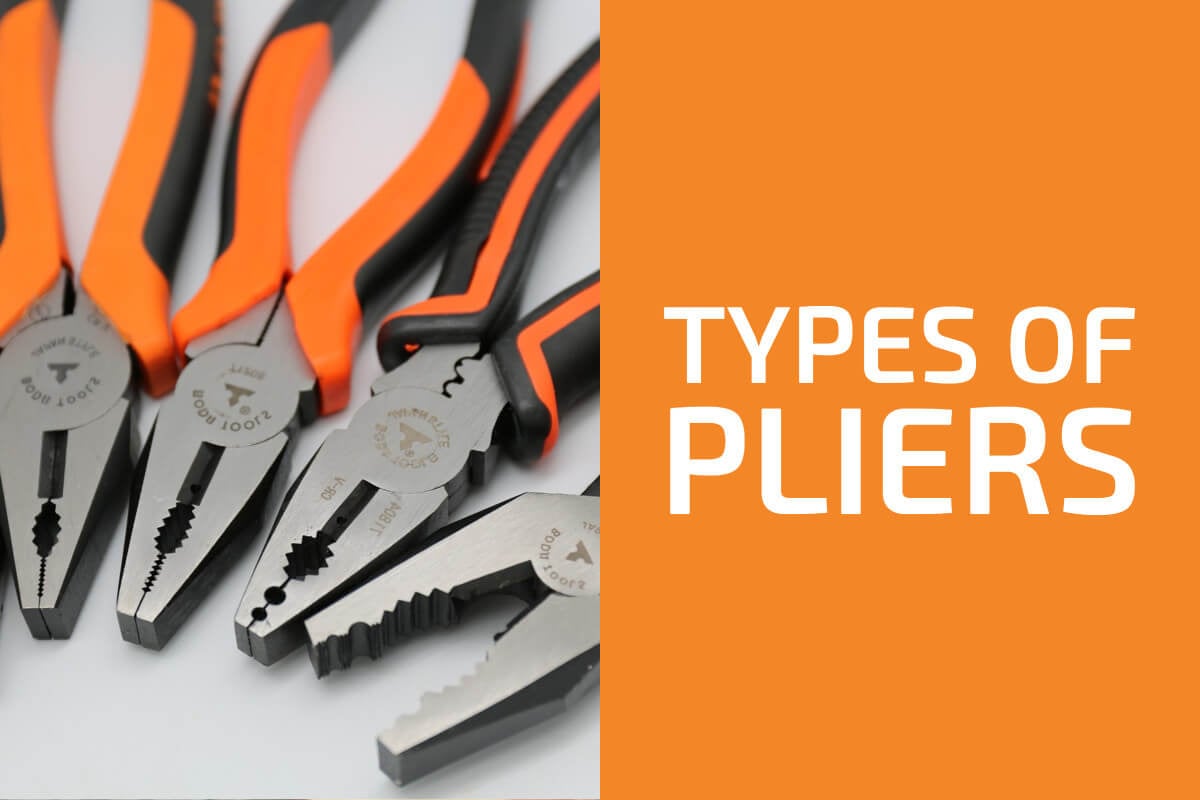 Pliers – they’re one of those go-to tools that every craftsman, handyman, and DIYer has available in their tool belt. In fact, there’s a good chance that if you’ve been handy around the house throughout your life, then you likely have a few pairs of pliers floating around your toolbox.

Besides the pliers you already have, you’ve likely seen that there are many, many other types of the tool out there. As such, you may have recently run into trouble when it came time to pick out a new set for an upcoming job.

With this guide, you won’t need to wonder which types of pliers you need any more.

The following are the most common plier types that you will encounter in both the professional and DIY fields. While you may not need every one of these pliers at once, they are good to keep on hand for their general-use versatility. 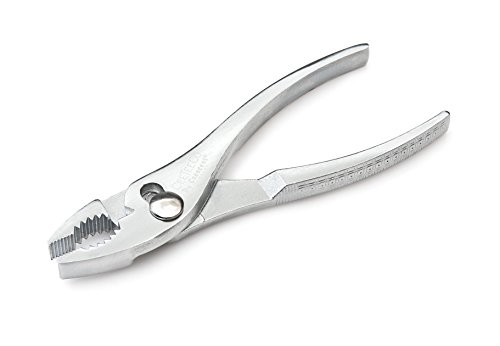 When most folks request a pair of pliers, slip joint pliers are what they have in mind.

These pliers are a general-use tool that can be identified by its adjustable fulcrum. This adjustment allows its gripping jaw to open wider or narrower, which in turn allows these pliers to take on a wide variety of tasks.

That being said, these pliers see the most use in plumbing jobs.

In fact, in the plumbing field, these are sometimes known as water pump pliers. Ideally, whatever pair you choose, you should ensure that its adjustable fulcrum space includes notches. These allow the adjustable bolt to sit comfortably on any width setting without slipping.

Many people aren’t familiar with the “lineman’s pliers” moniker. Even so, many DIYers and professionals use these pliers every day to complete electrical work.

At a glance, these pliers can be identified by their diminutive jaws and indented center. This indentation actually creates a sharp cutting surface that can be used to trim wire and more.

As noted, these pliers see a lot of use in the electrical field.

As a result, most worthwhile pairs of lineman’s pliers come standard with a rubberized grip. Not all sets include this kind of grip, though, so those looking to use these pliers for electrical work should ensure their tools are properly insulated before making any cuts.

Beyond cutting electrical wires, these pliers see a fair bit of general-purpose use when it comes to gripping objects. In particular, the jaw strength and durability of these pliers allows them to bend and curl metal with relative ease. 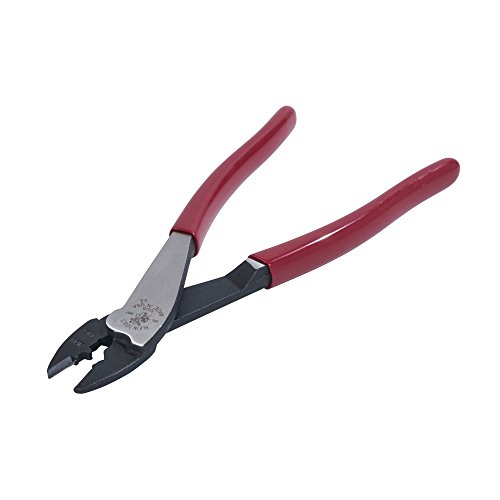 Crimping pliers are designed primarily to do exactly as their name implies–that is, crimp materials (namely, wires) together.

To do this, these pliers utilize a tight jaw and a fulcrum close to the unit’s tip. This allows a pair of crimping pliers to maximize the force applied to two wires fed into the unit when the pliers’ handles are squeezed.

Crimping pliers are technically designed for special use.

But, due to their more recent utilization in the telecommunications industry, crimping pliers are a common sight among home installation teams. Moreover, specialty crimping pliers are made that allow heads to be attached directly to the end of the cut wire (such as on a co-axel cable). 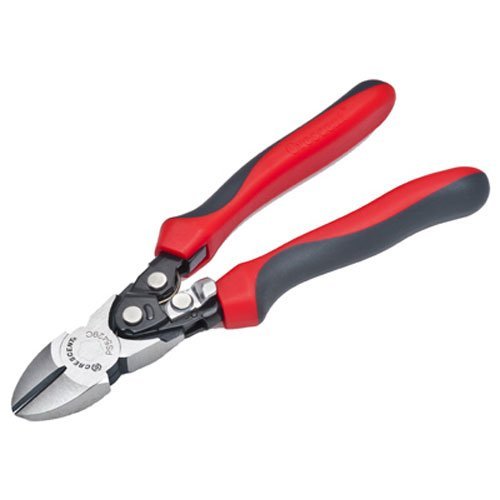 As you may have surmised, this is because diagonal pliers are most commonly used to cut wires. To make this possible, a standard set of wire cutters features a short, sharp head that can often cleave through even insulated wire with just a single squeeze.

Diagonal pliers also see a fair bit of use in the carpentry field. That’s because a set of sturdy diagonal pliers are often able to cut through small-gauge nails cleanly. This is not possible with all types of diagonal pliers, though. As such, users should use caution when attempting to use diagonal pliers for this purpose. 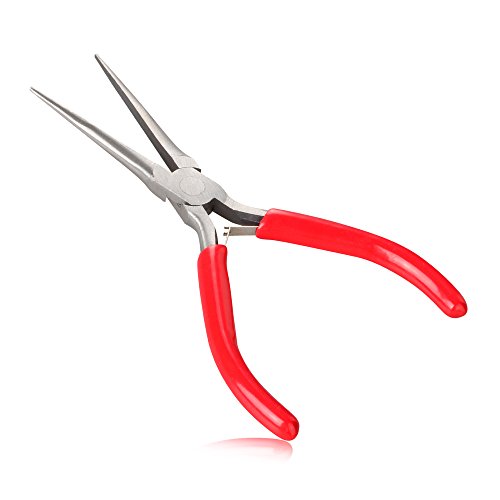 While this makes it harder to grip objects, the smaller overall size of these pliers allows them to work in spaces standard pliers cannot reach. 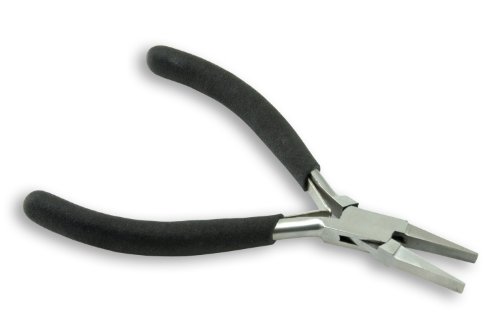 Flat nose pliers are a close relative of the needle nose pliers. However, rather than their jaws coming to a point, these pliers’ tip makes use of two flat, thin jaws that have more space for gripping. The shape of these jaws leads to a second name for these pliers – “duckbill pliers.”

This is because the shape of their jaws allow a user to make reliable right-angle bends as well as straighten out curved materials. These pliers also come in a variety of sizes based upon the length of the jaws.

Among these, the extra-long flat nose pliers can be used to reach an object that is deep within a narrow recessed space. 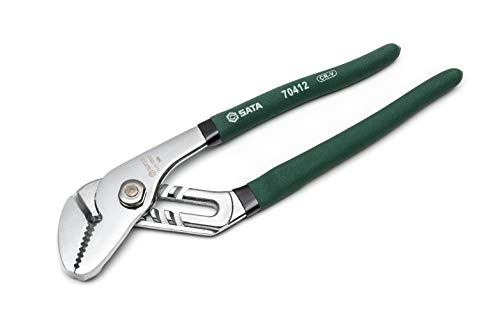 After standard slip joint pliers, tongue and groove pliers are the second most commonly used by DIYers and professionals alike. In fact, these two plier types share some similarities given that both have an adjustable sliding jaw system.

Rather than two flat jaw surfaces, these pliers utilize one flat and one curved jawline. This allows them to obtain a better grip on larger objects and objects that are positioned at an angle from the user.

As a result of these adaptations, tongue and groove pliers see use in any field that must regularly tighten and loosen large hardware. 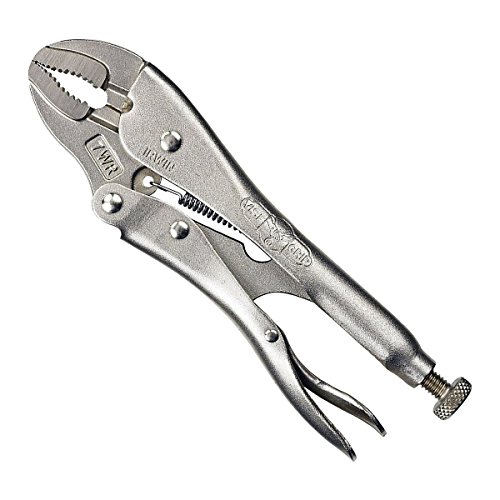 Also known as a “vise grip,” the locking pliers are perhaps the most misused type of pliers.

Often, users attempt to utilize these pliers as they would common slip joint pliers. However, the adjustable, locking nature of these pliers puts them more in line with a wrench in terms of function.

However, unlike a wrench, these pliers are exceptionally capable of gripping onto and loosening stripped bolts with ease.

These are a few plier types that see less general use among craftsmen. Instead, these pliers are better suited to a specific task in a specific line of work.

You should consider investing in any of the following pliers if you regularly need their functionality to successfully and efficiently complete your tasks. 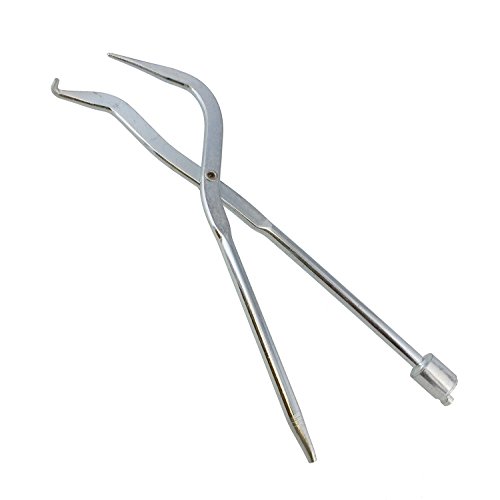 Brake spring pliers diverge from the regular functions of pliers because they are not designed to cut or really grip anything. Instead, brake spring pliers look a bit like a pair of scissors, save for the hooks at the end of each “blade.”

In terms of function, these pliers are designed to hook into and apply pressure directly to springs found in drum brakes. This allows for their safe and secure removal and replacement.

As might be expected, brake spring pliers are found almost exclusively in automotive repair shops. A mechanic may choose to utilize these pliers rather than pulling out a larger piece of spring compression equipment, which is less versatile and user friendly.

Of note, some brake spring pliers also include a ratchet on one of their jaw hooks to allow for the expedite removal of hold-down pins used on drum brake springs. 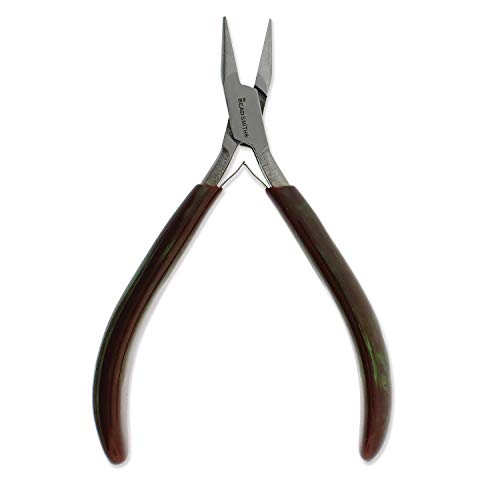 However, chain nose pliers are unique because their jaws are triangular in shape while maintaining a flat interior. This allows them to work in tight spaces while still retaining a fair amount of leverage over the gripped object.

As far as a specialty is concerned, chain nose pliers excel when it comes to bending, crimping, and shaping thin, wire-like materials. As a result, these pliers are a must-have tool for jewelry makers and artists who work with wire as a medium.

These pliers can also be used to open and close beaded tips with relative ease. 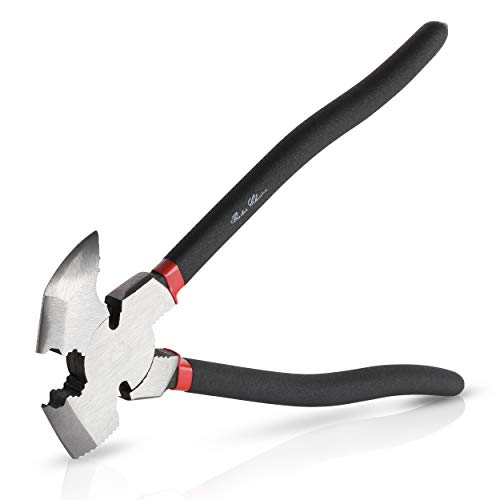 At a distance, you might mistake a pair of fencing pliers for a usual hammer. That’s partially by design because fencing fliers can perform some hammer-like tasks while still operating as pliers.

To that end, the sharp ends of these pliers’ jaws can cut cords and wires, a function that is shared with a purpose-made notch near the fulcrum. Meanwhile, the flat end of the jaw on these pliers can be used to drive staples while the claw end can be used to remove the same.

As a result of this built-in functionality, fencing pliers are a common sight to see on house building projects. That’s because this single tool allows a user to perform the actions of a hammer and set of pliers without needing to switch tools repeatedly.

As their name suggests, soft jaw pliers are designed for use in situations where the target object’s surface is sensitive to damage during the tightening process.

To counter this risk, these pliers include soft pads inside their jaws that provide a useful contact surface while still distributing pressure evenly across the jaw’s surface area.

All things considered, soft jaw pliers do not see a ton of use in the construction field. However, when it comes to working with chrome components, these pliers are indispensable. The same goes for work with scuba equipment, which requires care to prevent puncturing important piping.

Were you surprised to know that there are this many types of pliers out there in the world? Well, don’t contain your surprise too much because this is only around half of the plier types available to builders and specialists. In fact, there are many more specialized plier types that can help you perform everything from spark plug removal to canvas stabilization.

But all things considered, these plier types listed above are the pliers that you need to know the most.

So, be sure that you and your colleagues are using the right type the next time you head out to a job site. More importantly, be sure that your team always has access to the specialized pliers needed to make their work efficient, effective, and safe. If you are planning to buy a pair, check my plier set recommendations.