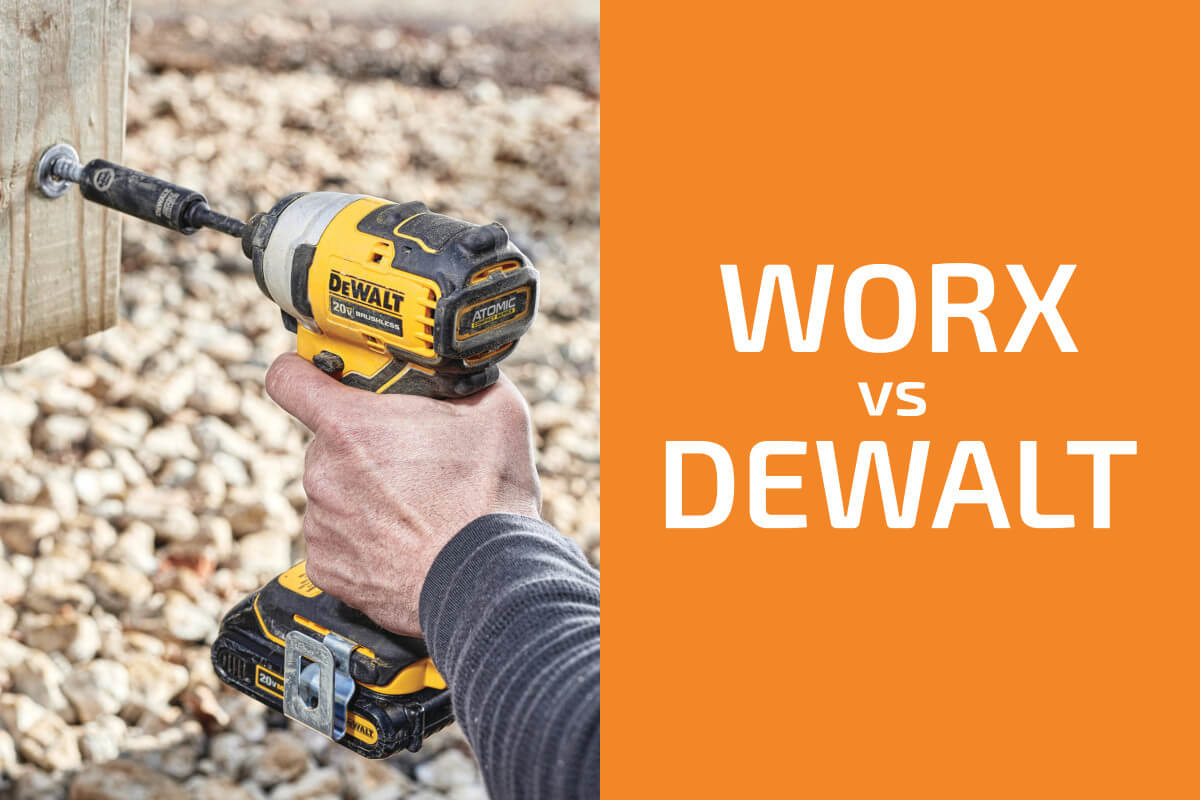 If you are looking to buy some power tools, hand tools, or outdoor equipment, you are probably trying to focus on a couple of specific brands. Preferably, you might even want your tools to all be from the same brand.

Two very popular of those include Worx and DeWalt. If you had to choose just one of those, which should it be?

A Brief History of Worx and DeWalt

Don Gao began by making various tools that he then sold to other brands, with Black & Decker being the main one. However, Don Gao quickly realized that there was much more money to be made by creating his own brand which is, of course, Worx. In 2004, Don Gao and the Positec Tool Corporation created the Worx brand, which began selling tools and lawn equipment under its own name.

At this time, Worx tools can be found in various large retail chains including Lowe’s, Walmart, Home Depot, Canadian Tire, and Costco. Information on the size of this brand is very limited, but as far as we can tell, the brand pulls in only a few million dollars in revenue per year, and also has well under 100 employees.

Worx is a Chinese power tool and outdoor equipment manufacturer. It was launched by Positec in 2004.
Shop Worx on Amazon

On the other hand, we have DeWalt, an American tool brand started back in 1923 by Raymond E. DeWalt. Raymond actually invented the first radial arm saw which became a flagship product for this brand in the early days. Although the company started in the 1920s, it was not incorporated as DeWalt Inc. until 1947.

In terms of ownership, the American Machine & Foundry Co. purchased DeWalt in 1949, but did not own it for long, as it was quickly scooped up by Black & Decker in 1960. Of course, Black & Decker merged with Stanley Works to become Stanley Black & Decker. Interestingly, this is the parent company that owns DeWalt to this day. It markets these tools as its high-end line.

At this time, DeWalt produces a variety of corded power tools, cordless power tools, mechanic’s tools, as well as outdoor lawn and garden equipment too. Moreover, the company has roughly 13,000 employees with about four billion dollars in annual revenues, thus making it a whole lot larger than Worx. A cool side note, DeWalt has sponsored a plethora of NASCAR drivers.

Something that needs to be made clear about Worx is that the owner, Positec Tool Corporation, operates out of China, and nearly 100% of the products it makes are indeed produced in the country. With that being said, although some people have concerns about Chinese made goods, especially tools and machinery, Worx products are regarded as being fairly high in quality, all things considered.

Something else to note is that Worx tools are not overly expensive, although they are not regarded as being cheap either. Just like the prices of Worx tools, the quality of the products is also seen as being about average, not great, but not too bad either.

For the most part, the consensus is that Worx tools are fine to use for home use, light repairs, DIY tasks, and other light duty jobs. On the other hand, they are not usually regarded as being quite durable or tough enough for heavy-duty, daily, and professional use. Most would agree that it is a perfectly fine consumer brand of tools.

When it comes to DeWalt quality, these tools are regarded as being quite high on the scale. They may not be the number one most durable and highest quality of tools in the world, but they are up there with the top competitors, and they can definitely hold their own.

DeWalt tools are perfectly fine for home use, DIY jobs, repair tasks, and for other such jobs. However, unlike Worx, DeWalt tools are also seen as being more than good enough for daily, heavy, and professional use. These are the kinds of tools that tradesman are happy to use. Of course, you get what you pay for, and no, DeWalt tools are not cheap.

DeWalt makes its tools in Mexico, Brazil, China, Italy, United Kingdom, the Czech Republic, and the United States. It operates six US facilities including in Connecticut, Maryland, Indiana, Kentucky, South Carolina, North Carolina, and Tennessee. The fact that over 60 million DeWalt tools are made in the USA on a yearly basis is a pretty good explanation as to why the products are so high in quality. 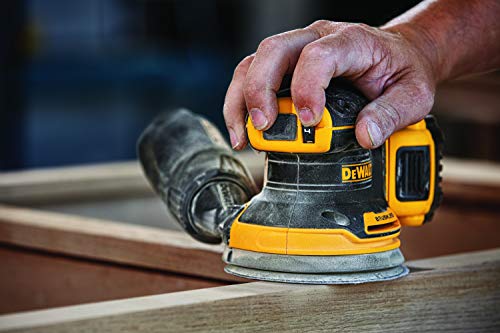 In terms of warranties, DeWalt features a 30-day money back guarantee on all tools. It also offers a three- or seven-year or even limited lifetime warranty on its products. The exact warranty depends on the product you get.

As for Worx, their products generally come with a three-year limited warranty.

Worx vs. DeWalt: Which Has a Better Product Portfolio?

Something that is quite clear is that DeWalt is the much larger brand, and therefore has a much larger selection of products. Yes, both brands produce lawn and garden equipment, power tools, and accessories, but DeWalt also produces plenty of hand tools and workplace gear, lighting solutions and more.

The exception here is with outdoor equipment, in which case Worx does have a slightly better selection in some categories. What can be said is that Worx focuses quite heavily on outdoor equipment, whereas DeWalt is more about the tools.

To get a better idea of overall product selection, let’s take a look at some specific categories. 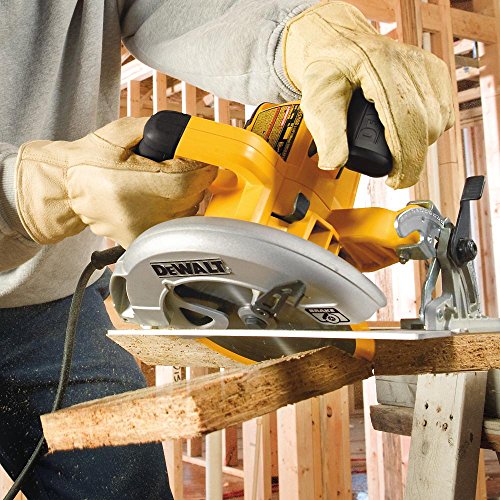 Which Brand Offers a Better Selection of Drills and Impact Drivers?

One product on the Worx side that’s interesting to mention is the Switchdriver, though which has two chucks.

Which Brand Offers a Better Selection of Blowers, Trimmers, and Other Outdoor Equipment?

As far as outdoor equipment is concerned, Worx has three mowers currently listed on its site, whereas DeWalt has just two. When it comes to blowers, although DeWalt does have around a dozen models, Worx actually has more.

This trend can be seen all throughout the various outdoor tool categories. 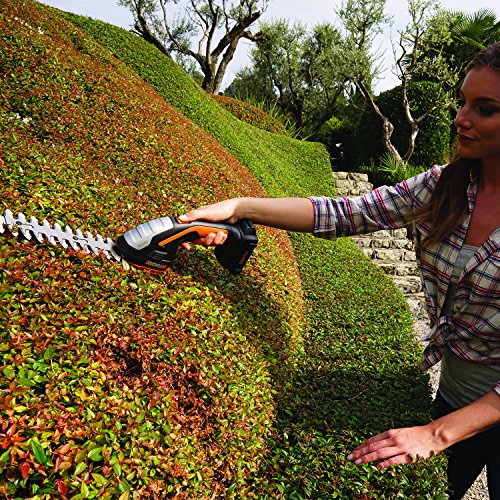 hat said, Worx tools come in at reasonable prices and have a decent level of quality, whereas DeWalt is much more expensive and also higher in quality.

The bottom line is that if you need affordable tools for basic use, Worx is fine, but if you need long lasting and super high quality tools for heavy duty and long term use, and you don’t mind paying top dollar, then DeWalt is the way to go.

How Do Worx and DeWalt Compare with Other Brands?